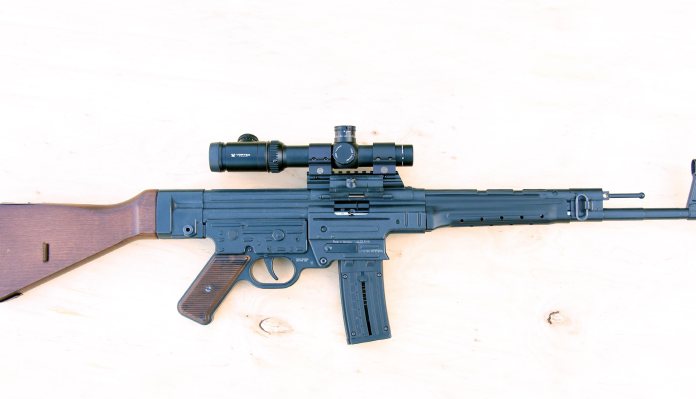 German Sport Gun (GSG) gained my favour a couple of years ago by recreating two of my favourite German military weapons - the StG44 Sturmgewehr or assault rifle and the MP40 sub machine gun. Both I hasten to add in UK-legal .22 Long Rifle, semi-auto format. I used to collect military self-loaders prior to the 1988 self loading rifle ban, though we can’t own the real thing anymore. But, and calibre aside, the authenticity of the build impresses and I chose the StG44!

I’ve tested the StG before and found that even with its issue iron sights it proved surprisingly accurate given it uses a slim barrel for most of its length, with an alloy dummy outer that replicates the original dimensions. But there did not seem to be any way, short of surgery to fit a scope to see what it could do. The real rifle had provision to mount optics in a QD base behind the rear sight, I heard GSG offered a mount and a call to the distributors got me one.

Sadly, it’s not like the original but instead uses the rear sight base as the fixing point, meaning that if you opt for a scope, you can’t use the irons. Which is no big deal, as most people prefer optics. The kit consists of a short, U-section Picatinny rail, internal spacer and twin fixing screws plus Allen key. The rear sight is removed by flipping up the range arm to expose a screw, there’s another under the tensioning spring, so you push down on the front of the rear sight and pull it out backwards and remove the spring to expose it.

With that off, drop in the spacer, curved side down, and slide on the Picatinny block from the rear, over the base until it stops and wind in the two Allen screws and you’re done. I felt a smaller scope would fit in more with the rifle and used my Vortex 1-4x24 Viper PST, OK not authentic but it looked OK. There’s not a lot of eye relief adjustment but I found I got a good head/scope position easily.

As I wanted to see how accurate the rifle was scoped up, I would shoot it off the bench, but the full sized .22 magazine that holds 25-rounds is just too long to do that easily. So the next thing I got was a 10-shot mag, which is considerably shorter, so allowing me a stable and comfortable position. Regardless of your sight choice, it does make the StG a deal handier.

With Fiocchi Ultra Velocity ammo the StG prefers, it was shooting about ½” at 50m, which I thought pretty good for this sort of rifle. Not sure if I’ll buy the scope mount. as I like the authenticity of the irons, but it does make the gun able to compete with those scoped-up .22 The shorter dimensions AR15s and similar.