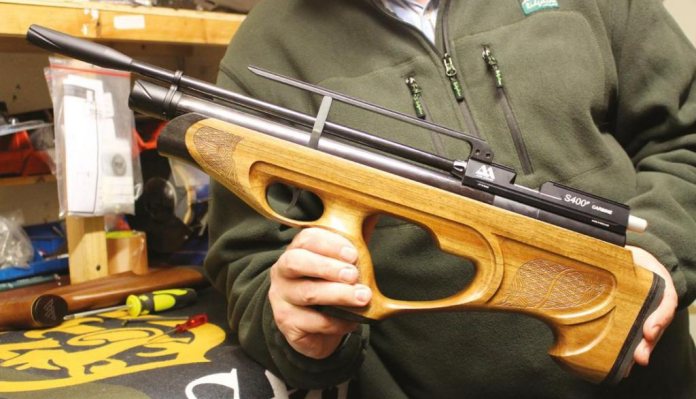 This is the ideal solution for those who are unsure to get another rifle. Because it in effect gives you two guns in one, as you can use your standard PCP action for a compact or long rifle to suit your needs. and it’s only a five-minute job to put it back into the original woodwork. Conversion Kits consist of a walnut thumbhole stock, trigger linkage/scope extender rail and all fittings. I used an Air Arms S400 Carbine PCP.

1. Remove the action from the original stock, leaving the trigger guard in place

2. Remove the muzzle weight or silencer if fitted and slide off the rifle’s original barrel band

3. The unit shown is termed as the trigger linkage/scope extender rail, but it does far more than its name suggests. Quite frankly, it’s the heart and soul of the kit, due to this all in one unit consisting of the reach forward rail (at the top), a barrel band that drops down to not only support the rail but is also the attachment/hinge point for the new ‘dummy’ blade. Also, from this you can clearly see the linkage arm that runs back to eventually be attached to the original trigger blade

4. Here, the ‘reach forward scope rail’ is being put in position above the action block. You can clearly see the integral barrel band, which slides over barrel and reservoir to the point you can attach the top scope rail to the front and top of the rifle’s action block. It attaches like the base of a scope mount onto the railed block with two hex head bolts. At this stage of fitting, the securing bolts only need to be ‘nipped up’ finger tight

5. The linkage arm is a cleverly designed fitment, here you see the very rear of the arm being secured to the original trigger blade. When positioned correctly and working freely, you can then fully secure the new scope rail onto the dovetails of the action block

6. Once all is secure, the action can now be ‘dropped’ into the new Bullpup furniture, where it sits very snugly into the ‘routing’ in the top. The ‘dummy’ trigger blade sits within the stock’s integral trigger guard, while the rear of the action block is now approximately 2” away from the butt pad. At this stage, you can (on certain rifles) refit the original barrel band. Note: On certain rifles, doing this conversion means you lose access to the trigger safety!

7. A single Philips head stock bolt is supplied to keep the action secure in its new woodwork and note all air rifles with ‘under-slung’ air gauges are accommodated for, due to the bullpup stock having a pre-drilled hole in the underside of the upper section of the enlarged thumbhole allowing the ‘air status’ to still be clearly seen

8. A ‘cheekrest’ is available as an optional extra (but only fits certain rifles), however in my opinion the transformation deserves fitting one because you’ll appreciate its presence

Immediately upon seeing an established air rifle action such as this in Bullpup configuration, you can’t help but be impressed by how natural it looks, as there’s nothing in the slightest way out of place. In use, it immediately displays all the characteristics of the concept, superb balance and handling, is much lighter than most production pups too, plus it comes much more quickly into the shoulder for quick target acquisition. The dummy trigger attached to the original feels very much like the one it replaces. The blade is broad and nicely-curved and is easy to make full contact with from the pistol grip. I’ll soon be testing one of my rifle actions in a suitable conversion kit and will report back on how it performs.

An average ‘VIT Bullpup stock’ weighs 3.4lb The stocks differ in length, depending on if you are converting a standard-length rifle or a carbine. The stock for standard rifles is 21” in length, while the carbine is a mere 17”

Now, the ‘really’ amazing bit - before the conversion, the Air Arms S400 Carbine pushed the tape to 40” including the tapered muzzle weight supplied as standard. After the Stock Exchange it measured 27”. Now that’s short!