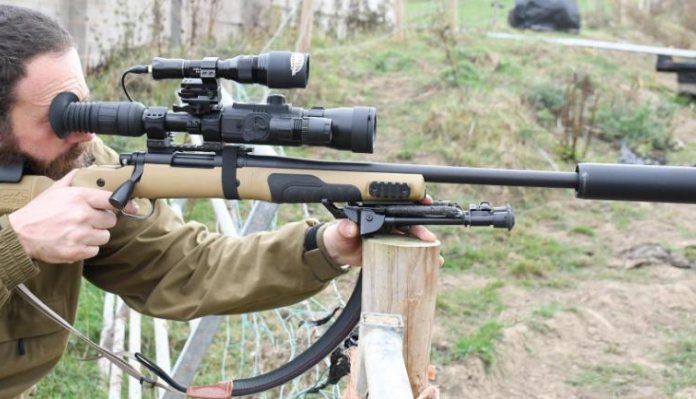 The latest Bifrost model from GRS is an advanced polymeric evolution of the characteristic designs we have come to know and love from this Norwegian manufacturer. Offering inlets for most common rifle actions, the Bifrost takes a step beyond the previous lightweight Berserk unit, to show more integration of the homogenous structure. And a more organic form to mould your gun’s straight lines to the ergonomic needs of the human form.

Two halves are bonded and bolted together to form the body and I had the Remington 700 short action model, to suit my own test rifle. The underside and inlet are designed around the standard BDL floorplate for this rifle. Close inspection of the inlet shows extensive webbing within the structure, to aid rigidity and stability, without excessive mass. I’m told that the 30-65 % glass fibre reinforced composite material used is well suited to light machining that may be required if your gun requires specific modifications already in place.

The slim, ½” recoil pad is quite soft and grippy, yet exposes no internal hard points that will prove uncomfortable during and after the shot. The press button SpeedLock 2.0 system shows a cheekpiece height adjustment of 30mm with length of pull (LOP) variable from 382mm to 352mm. The recoil pad offers 40mm of vertical adjustment with interesting and incredibly comfortable rotational offset anywhere through 360º in 5º increments. Everything is sprung loaded and although not totally silent, once set up remains in position and needs no tools. The push buttons that pass through the stock from either side are quite clunky, but also show equal solidity and can be accessed easily.

Moving forward to the pistol grip shows GRS’s well-respected 6º off-set design, for a stress-free firing hand position. Textured, black rubber inserts are seen here with a slight palm swell and on the forend offer a highly tactile gripping surface. A standard underslung stud on the 57mm wide forend makes Harris bipod fitting simple and secure but if desired. A 55mm Picatinny rail is supplied that can be bolted on instead for an Atlas or similar pod. Mounting points are present both side of the forend too, so the twin screws can affix this piece or any optional extra rails you want for accessories.

With total rigidity and a 30mm barrel channel, free floating a heavy tube is no problem with no intermittent barrel contact and plenty to fill your hand’s grip when shooting unsupported. Although it’s hollow around the bedding screws, there are lateral Torx tie bolts either end of the action void, to ensure nothing will splay apart when you tighten your action down. But as always, I’d be tempted to glass/epoxy bed any serious rifle build to maximise potential accuracy.

My rifle slotted straight in as promised and a recommended 5.2 Nm(Newton meter) torque on the action screws showed it fitting centrally within the forend for a neat appearance. I liked the total adjustability and found the slender comb on this Bifrost to be significantly more comfortable than those fitted to GRS’s laminate models, which I feel make your head roll over too much. This had a squarer top and narrower base, so engaged the cheekbone, NOT the jawline and made me much happier with better linear scope alignment. The underside has a deep butt hook with a further 55mm Picatinny mounting rail for monopod etc, but still allowing plenty of space for a soft rear bag and plentiful room to operate such an accessory. I liked the ribbing to the surfaces in this area to aid grip on the otherwise smooth Coyote (brown) coloured polymer, but I think it’s quite yellowy and unattractive to boot, so the darker Olive Green seems preferable for a UK-oriented field rifle.

Interestingly, the gun remained quiet when being handled without undue hollow noise from any bumps or bangs, it was almost like Walnut in that respect, but a lot more durable and the polymer specification chosen by GRS is a first-rate offering, with incredible stiffness imparted throughout where needed.

Finally, QR sling fixings are fitted within the butt hook and to the left side of the forend allowing an extremely comfortable carry with a Biathlon sling of what is possibly going to be specified as a heavy rifle with large optic and multiple accessories. I was using the Bifrost with a night vision rig and extra illuminator, so handling was important to me. I dislike a top-heavy, imbalanced gun and the GRS remained a stable shooting platform, allowing good gun fit without too much mass to make improvised shots, in positions other than prone, difficult.

Inlets available in autumn of 2018