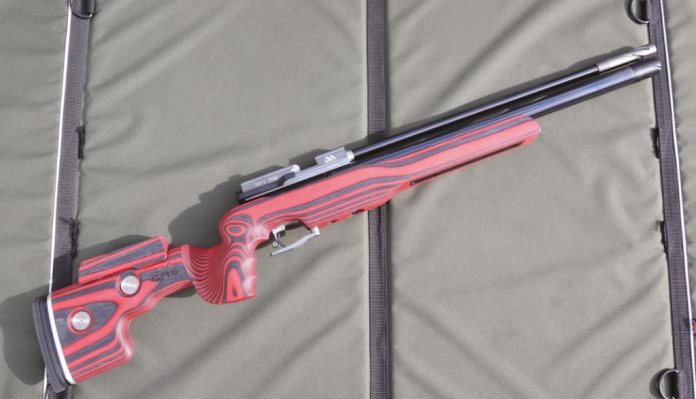 As a self-proclaimed airgun fanatic, I’m heartened to see how the sport seems to have exploded in recent years. Interest has never been greater, and the number of aficionados knowledgeable enough to see the benefit of premium kit, seemingly grows by the day.

Custom stocks have been around in one form or another for many years, but the vast majority of what has been available up until now, have been bespoke products, made in extremely small numbers, by specialists and enthusiasts on the competition circuiteither in Field Target or the Hunter Field Target world. Several bigger players have emerged of late, and one design that’s caught my eye, up at the British Shooting Show, was the GRS Sporter stock.

GRS Stocks are manufactured in Norway, and marketed by sole UK distributor, Highland Outdoors. Their Sporter stock is made from birch laminate, which means that the blank is first constructed by bonding thin layers of wood together. When the final shape is cut from the blank, each thin layer is revealed, and the overall pattern becomes quite dramatic. Laminate is just about the most robust, stable form of wood, since it remains warp-free, even after significant extremes of temperature. An increasing number of manufacturers use the medium for that very reason.

GRS make a variety of styles for firearms, but at the moment, the ‘Sporter’ is the sole design which is being imported for airguns, and it’s available in a variety of colours. My tester came in the black/red specification, but they are also available in black, brown, green mountain camo, royal jacaranda (a mixture of tan, grey and burgundy), and blue. Currently they are available to fit any of the highly popular Air Arms S400/ S410/ HFT500/ S510 derivative models, along with the older and now discontinued S300.

For the test, I chose an HFT500 action, and fitting it was simplicity itself, with just one central mounting screw. Drop in the action, feed the bolt and washer into the bolt hole, and nip up. One bolt fixing is how it should be for a PCP, and my test stock fitted perfectly, straight away.

First impressions of the GRS Sporter are extremely positive, and obviously that dramatic pattern grabs the eye. But look closer and there’s some serious ergonomic design work on show. The full length forend is flattened off on the underside for a stable platform, whilst a five inch stretch of usable accessory rail is neatly recessed into the underside, to take counterweights/ bipods and suchlike. The pistol grip is nicely contoured for the fingers, but perhaps the key detail is the way it is given a 6° cast off to the right. Mount the stock, and that grip feels uncannily accurate, as it naturally fills the palm and supports the hand, with no hint of strain. Finish is ultra matt oil, which and though maybe not as flash as a gloss finish, it’s a little more subtle, with all the grain highlighted.

I have to admit that when I first took delivery of this stock, with no notes attached; I took to the cheekpiece/comb and butt with my trusty set of Allen keys. A quick twiddle and no response later, and I soon realized that I didn’t need it! Those silver discs are actually spring loaded buttons. Just push them and pull out the butt pad, as little or as much as necessary, to achieve a perfect length of pull (LOP). Likewise, the cheek-piece, sitting on its own raiser bars. But there’s more! An additional small spring loaded catch sits inside the rim of the butt pad. Depress this and pull the rear assembly up or down to suit. It then all naturally locks in that position. GRS call all this their Speedlock system, and apparently it’s 40% stronger than their previous design. Anyhow, it all looks and feels very robust indeed.

This stock’s specification states that both the cheek piece and butt should pull out and stop at maximum. On my example, the cheek stopped at .9”, whilst the butt would set at 1.5”, but pull right out after that. In reality, so what- that’s plenty of adjustment, transforming handling, and getting everything to fit just so. One minor detraction was a curious small rattle at the butt end, but I’m nit picking. My only other observation would be that the forend could be deeper, but admittedly, a stock raiser/ hamster could be utilised if necessary, via that neat accessory rail. One thing’s for sure- that Limb Saver rubber pad is the best I’ve encountered in ages, with a luxurious, super soft, accommodating feel.

In essence, what these GRS stocks allow us to do is set the furniture to fit our body dimensions, and not the other way round! This relieves muscle strain, effort and fatigue, as well as nails that perfect eye/ scope alignment, and trigger position- which improves performance no end at the end of the day. Having said that, they don’t come cheap! Whether you consider the benefits worth the additional outlay is another matter. Those quick adjusters on the cheek and butt pad have to be among the best I’ve encountered. Throw in that wonderful cast grip, and it’s difficult not to get excited.