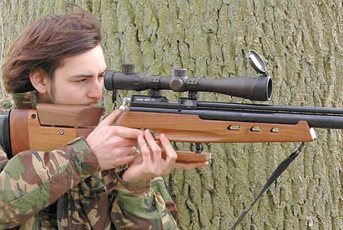 Production rifles vary enormously as far as handling goes. As always, budget plays a big part, and a bargain basement beginner’s gun, for example, will be designed with a simple, plain handle - built down to a price, with no frills or special features to speak of. Increase the budget and suddenly designs become much more effective. Factory stocks though, are still inevitably something of a compromise in trying to be all things to all people.

A classic example is the highly popular S400 MPR model from Air Arms. As standard, this rifle comes fitted with a pleasantly styled target stock in walnut. It’s marketed as a sort of half way house between the standard S400, and the company’s flagship FT model- the EV2.

The MPR is ideal for juniors and ladies alike, by virtue of the fact that it comes up unusually short in the butt. The problems arise though, when shooters of fairly large stature are considered. As standard it comes fitted with an adjustable butt pad attached to a rail; with one plastic spacer. But with the whole assembly adding little in length, the end result is a rifle that feels overly short in the butt to some.

Air Arms offer a kit, which includes several more of the plastic spacers. To be honest, they feel rather cheap for such a nice rifle and since the length of stock to make up, can be significant, a more substantial remedy is sometimes required. One option is of course the exquisitely made aluminium butt hook from Air Arms, which is available as an optional extra. But at around the £130-£140 mark, this represents a significant outlay, that can’t always be justified. Personally, I’m no fan of butt hooks in any case, so modifying the stock in this area is an attractive alternative.

What follows here is the fairly simple route taken to extending the butt of the MPR, but the principle method could easily apply to other rifles. Any piece of hard wood can be used, with ash oak, mahogany, and beech all good contenders.

The first step to any alteration is to measure the desired length of pull (LOP). This can be done by holding the rifle into the crook of the elbow joint, relaxing the hand and noting where the grip/trigger finger fall. Have someone measure the desired length, and note by how much the butt needs to extend to achieve it. This measurement will be the length of the new spacer/fillet.

Once you are happy with the dimensions, the next step can actually be tackled in two ways. Firstly, with the standard factory fitted plastic butt plate unscrewed, it can be used as a template, held against the chosen piece of wood. Draw around the outer dimension, and the fillet can then be cut to size using a sharp, close-tooth saw.

Mark up where the two holes fall on the new piece (again using the existing pad as a template) and then the two holes for the bolts can be drilled right through the new fillet.

Alternatively, with the butt assembly again unscrewed, the original plastic spacer can be used as the template, and drawn around (including the slots) to get the basic shape for any new fillet. The advantage if this route is taken is that it doesn’t rely on such a perfect mating of the outer dimension to look good, since the fillet sits well within the outer rim of the butt. The spacer design uses two slots to locate around the bolts. One pushes up onto the bolt, whilst the other swings onto the other from the side. With the drawing complete and the job firmly held in a vice, the rough shape can be cut out. The two slots can then be carefully cut out with a jigsaw or junior hacksaw.

Whichever route is taken, the sanding process can now begin. Using 120 grade abrasive paper or similar, until the finish is satisfactory. Dust off and try the fillet in position. Air Arms use metal socket thread inserts to secure the bolts on the pad, so fixings of the desired length need to be sourced. Take the metal insert to the DIY store, to check that the threads match, and cut the screws to length if necessary. With the dimensions sorted, remove the piece from the rifle and apply multiple coats of Danish Oil or equivalent, until the wood is nicely weather proofed.

It can be a good idea to initially cut the new fillet from Balsa wood, (which cuts like butter with a craft knife) to quickly knock up a test piece, enabling the correct length of pull to be gauged before any hard work is undertaken.

The MPR is undoubtedly one of the best sporting PCP’s on the market today, punching well above its weight in the performance stakes; yet getting that stock to properly fit (where larger framed shooters are concerned) is the key. With the newly fashioned extensions in place, rifles like the MPR can be transformed and the sheer satisfaction from some home DIY to make it all possible, is the icing on the cake!