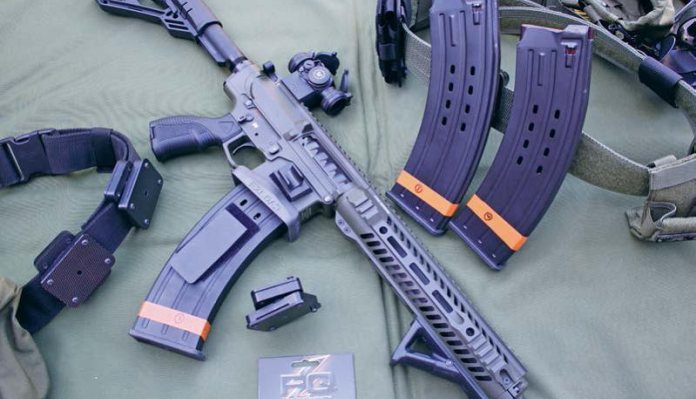 Practical shooting is a fantastic sport, it’s not just about shooting fast, it’s about reloading fast as well. In fact, you can shave more from your overall stage time on your reloads than you can just on the shooting element. Practical Shooting Supplies (PSS) is run and staffed by shooters, two of which are avid practical shooting enthusiasts. One of these came up with an idea for a faster way to change box magazines, dealing with the way the magazines are carried.

It is aimed at the larger capacity box-type mags, not the 10/22, 10-shot tiny ones. As most practical shooters use AR-type rifles in both .22 LR and 12-gauge, the FQ system hits the majority of the practical shooting market. They called it FQ as its “Fantastically Quick”, although I may have got the first word slightly wrong.

In very simple terms, a strip of plastic in a ‘U’shape is attached to your box magazine with Velcro self-adhesive strips. The free end of the ‘U’ strip slides into a slot on a carrier, which is attached to your shooting belt. Because the carrying element on your shooting belt is the same, you can carry either 12-gauge or .22 LR magazines. So, very useful for two or three gun competitions.

Just how quick is it? The first time I used the FQ clips with my UTAS box fed 12-gauge shotgun, I fired six shots, changed the magazine and fired another six shots all in 4.98 seconds. The FQ certainty works, it is quick and has transformed my shooting with my box fed, 12-gauge shotgun.

They sell either a clamping system for your belt with different thicknesses of spacers for thin and thick belts or a tactical quick release clip system. I have used both and they work very well. You can buy additional ‘U’ strips for as many magazines as you have and they come in a two-pack with Velcro strips. If you have a shorter magazine, such as a 5-shot for a shotgun, you can shorten the ‘U’ strip. Just don’t mount the Velcro loop strip too high on the mag as to impede its insertion into the gun’s magazine well. I’ve never lost any magazines when I’ve been running with my FQ system in the five years I’ve been using it. A brilliantly simple but effective system.

PSS also offer another very useful FQ product for loading 12-gauge box magazines. It presses the rounds into the mag as you load it and is finger saving as well as quick. I use it myself.