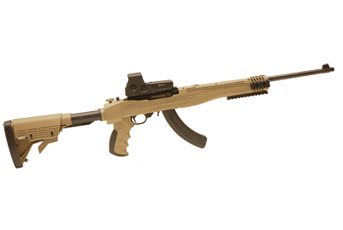 These days many rimfire shooters favour the military look-a-like semi-autos like the S&W, SIG and others. However, we should not forget that it was Ruger’s 10/22 that provided a much-needed solution right after the handgun ban that probably kept a lot of people shooting who might have otherwise given up. OK the 10/22 is not the most exciting looking of guns and as we tend to buy with our eyes there are a lot better looking 22 semis out there.

However, it’s well priced and reliable and also the rifle with probably the most after-market accessories for it along with the generic AR15, a fact not lost on Advanced Technology International (ATI). They make a lot of bolt-on stocks and accessories for a wide range of rifles and shotguns that includes Winchester, Mossberg, Saiga and even the Lee Enfield No 4 to name a few.

In the old days they made a Dragunovinspired stock for the Ruger 10/22 called the Fibreforce. Bang up to date they now have their new Strikeforce unit that gives this old 22 semi a sort of CAR15 back end look and feel as it offers a pistol grip along with a side-folding, 6-position telescopic butt. Add to this a Picatinny rail set and you have a lot going on that is going to make your Ruger more cosmetically appealing, competitive and practical in today’s hi-tech market place. Stocks are available in black, desert tan and destroyer grey, all at the same price, which will definitely appeal in a world of coloured guns.

Digging out my wood-stocked 10/22 (every home should have one) the switch over takes about 5-minutes. Off with the barrel band and out with the single mounting screw gets the timber off. Remove the screws that hold the Strikeforce’s handguard on and drop the barrelled action into the forend section and re-insert mounting screw.

If you want the Picatinny rails on then fit them first before dropping the action in. You get four – one long (4”) at 6 o’clock and three short (2”) at 3, 9 and 12. So the world is your oyster for lights, lasers and foregrips. Another neat touch is the hand guard has a square cut-out so you can still flip up the rear sight should you want to go irons. To further aid this ATI includes a drop tube adaptor, that angles the butt tube down so you can get your head onto the irons as the layout offers a straight comb that is on line with the rear of the action. An Allan key is included, all you have to supply is a Phillips screwdriver. Also in the package is a QD sling stud that can be positioned where you want to compliment the other two fitted - one the underside of the butt and the other at the rear of the receiver.

The telescopic butt gives six positions so you get a length of pull (LOP) to suit everyone, also included is an optional, adjustable comb. The forend build is slim and square, but there’s enough to get hold of. On that point the butt pad utilises their Scorpion recoil system and the pistol grip shows a similar rubber insert at the rear and full finger groves in hand filling dimensions. Recoil is academic on a 22 rimfire, but they also make the Strikeforce for the Mini 14 too, but the sure grip and control offered is the same.

The butt section folds up to the left of the action and is controlled by a simple, push-down plunger. The lock up is solid and even the telescopic butt piece does not wobble about that much. Overall this is a good design that does add to your 10/22 not only in terms of cosmetics but also practicality. All you need is a 25-shot magazine and some optics and your Ruger can go head-to-head with the SIGs and S&Ws of this world.

For
Well priced and effective

Against
Not a lot