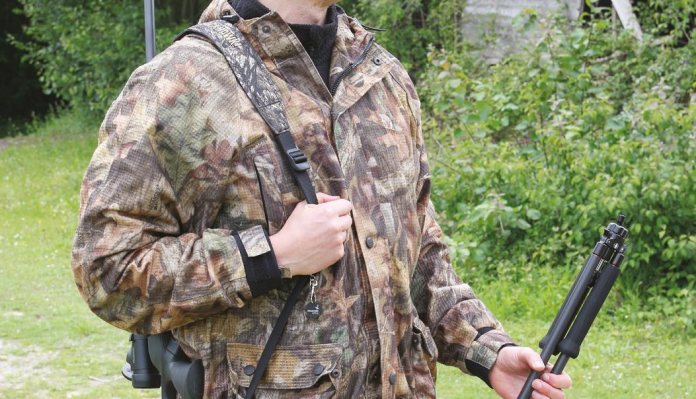 Like most hunters, I use shooting sticks as and when required and there are times when nothing else will do; typically when shooting deer in tall crops etc. Given the build; they also make a useful walking aid, certainly on rough ground and river crossings, aspects that I appreciate more as I get older!

The choice is massive but all follow a basic design with options on single, double or treble legs (length-adjustable or not) with some form of V-support for the rifle. Spartan Precision Products, makers of the innovative Javelin, magneticallyattached bipod, have now thrown their hat into the ring with their new Kapita tripod system. But first lets backtrack a little.

The Javelin appeared at the British Shooting Show in, I think, 2014 and caused quite a stir. So much so that I could not get near their stand due to the people crowding around. I latter met up with owner/MD Rob Gearing and his General Manager Simon Wilkinson at the Phoenix meeting where I had a good chance to see what all the fuss was about and I was impressed. Made primarily from carbon fibre for lightness and strength it offers length-adjustable legs with removable rubber feet that expose tungsten carbide tips for hard surfaces. It also incorporates cant and swivel facilities, but it’s main feature is it’s ‘patented’ magnetic attachment facility.

The magnetic attachment stud (spigot) in the top of the bipod locates into an external socket the RAP (rifle attachment point) that’s screwed under the forend, linking rifle and bipod together with no mechanical fittings. Later, Spartan added their flush-fitting, gunsmith adaptor that has to be bonded into the forend, also a Picatinny-based RAP. I now have two Javelins; the Mk II and the Blaser Carbon Bipod for their R8 straight-pull rifle.

The word Kapita is Latin for head and in 2015 Simon showed me a prototype at the BSS. It uses the Javelin Mk II technology with 3-section (screw to lock/unlock) carbon fibre legs with the rubber feet and tungsten tips. The legs screw into three, hinged sockets set equidistantly around the head that incorporate stabilising and spread-limiting lugs. The spigot is integral to a ball & socket arrangement with a screw collar that acts on a synthetic washer to adjust the tension/position. Underneath there’s a screw-in articulated hook.

Two legs have foam gripping tubes at the top and also individual magnetic mounting inserts, the third has neither, all are removable! The ends of the first sections have foam rings that keeps them apart when stowed. The weight is 650-grams and it’s 77 cms long (stowed). The minimum operating height (no leg sections extended) is 87 cms and maximum is 157 cms. Nothing radical so far, apart from an efficient and hi-tech design with the advantages of the light yet strong carbon fibre build. Compared to a tubular aluminium design the Kapita is far more rigid even at full extension, which as we shall see, translates into a truly stable shooting position however you use it!

Where it all comes together is the attachment point, as the magnetic spigot has a stabilising affect on the rifle in the aim as it’s physically linked to it. Add in the fact you can adjust the head tension makes the Kapita the best tripod system I have ever used! Testing was done with my Blaser R8 Professional Success, which has the integral forend cap and my S&W M&P 15/22 semi-auto using the Picatinny adaptor.

Build quality is excellent and the weight negligible; so not the sort of thing to worry about carrying! Obviously you will need to equip your rifle with a RAP, though a bit more effort I’d recommend the gunsmith adaptor, as when correctly fitted it’s strong and discreet; equally so the Picatinny version! Like any shooting sticks, you’ll need to set the height required before going out, which saves time when you shoot. I’m 6 ft 2” and found that 4” off full extension suited me for standing. Conversely up one of my high seats, which is a tower with a floor, I could spread the Kapita on minimum height and use it sitting, which was much preferable to off the rail! For bunny bashing with the Smith, deploying the first extension in conjunction with a WalkStool offered a comfortable and more importantly stable, field sitting position.

Yes a great design in material and build, but I hear you say I’ve got a good one already; so why should I buy the Kapita at near three times the price; fair comment? For me, where it scores is the fact you can tighten up on the head easily, which combined with its superior rigidity takes a lot of the wobble factor out of shooting sticks. Range testing showed that my group sizes with the Kapita, standing improved over using a normal yoke-type tripod and sitting felt like I was near on a bench! But there’s more!

Unscrewing a leg, you can turn the Kapita into long leg bipod/twin sticks, with all the added stability of its head system and it knocks down the weight to 500-grams (1 lb). Again, not a fan of twins up until now! Getting minimalistic you can even remove one of the legs with foam grip and magnetic stud to plug it into your RAP direct so giving a light and rigid single stick. I hate singles but the magnetic damping effect does make this set up far more useable, plus it doubles up as a great trekking pole too.

The Kapita can be bought as a bipod or tripod, the former saving money, but I’d say get the latter as it’s all there. Also, Spartan can supply their standard magnetic spigot or the longer version for the Blaser R8 forend. Another useful accessory is the tripod adaptor, which is a simple socket with the common camera thread on the end. Just wind it into your optic and drop it onto the spigot.

Now that mysterious hook underneath! It’s good for hanging a bag off, which further adds to stability and also keeps it off the ground. I suppose you could also use it with a gambrel for prepping smaller deer species too. I’ve also seen a prototype tent that uses the Kapita as a frame; sounds daft, maybe but it would keep you and your gear dry at a pinch.

Simon told me they’re working on a series of short legs that would allow conversion to a compact bench/bonnet tripod too. Plus a high seat mountable socket that can be used in conjunction with a short leg assembly. There’s plenty in the pipe line, all of which I will be testing. One thing it does need is a leg strap to keep them together when you are walking and a sling; I’m sure they or Niggeloh (the German sling makers) are working on that! But at the end of the day I like what I see, as it’s a practical and versatile system; it’s not cheap but probably worth the outlay for the serious hunter!