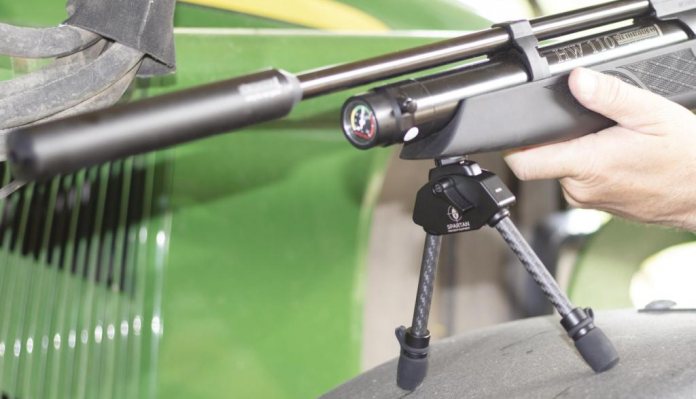 Spartan hit the UK shooting scene in 2014, with their radical Javelin bipod. Made of carbon fibre and aluminium, it offered an innovative, plug-in, magnetic ON/OFF mounting system. Aimed originally at hunters who wanted a light, strong and well featured bipod. It has probably sold in excess of 40,000 worldwide, in its various designations and branded versions.

Spartan continue developing new products and evolve existing models, so MD (Rob Gearing) sent me some new items. It’s not a full-on, Pete Moore review, just a look, as that will come once I have given them a full run ashore. However, they do seem to address some areas in their portfolio that I thought were lacking.

The Lite attaches and functions in the identical manner to the Javelin and is built to the same high quality, using the same materials and gives locking cant and traverse. The major differences are the non-telescopic legs screw into the yoke, so can be removed and replaced with ones of different lengths to adjust height. It was made with airgunners in mind too, but it’s tough enough for full bores, up to and including magnum calibres. Also, the cost is down considerably.

The Davros (yes you read it right) is based on their Sentinel tripod’s head unit but will screw directly onto 3/8” & 1/4” male threads, that are typically found on camera tripods and modern shooting sticks. For example; you can upgrade the Primos Trigger Sticks tripod, to plug in your Javelincompatible rifle to the magnetic spigot system. It will also fit the new Sucker Mount and Mr G clamps, to again offer this facility for more varied mounting systems.

For years, I’ve used camera, sucker mounts, which are perfect for the bonnet of my Land Rover and even the windows for mounting rifles, lamps, spotting scopes and even cameras. Spartan have sourced a Wood’s Powr-Grip Model: LJ45AM suction cup with threaded stud that will accept the Davros. Spartan calls it the Sucker Mount, it pumps to produce the vacuum and is easily detached too and is rated at a strain of 18 Kg. Great idea!

Years ago, I started calling Rob Mr G and the name stuck; so, what better than to call another universal mounting system; the Mr G Clamp. The name describes exactly what it is, it can be fitted in several ways and the internally padded, G-section features a number of threaded studs to suit camera-type adaptors, with the clamping shaft ending in a thread for the Davros to attach to. It would be great for metal high seats with a front rail, or the cargo bed of a 4x4, just keep thinking to see where it couldn’t go.

A final item, I have yet to see, is the up-graded 2019 Javelin, the Pro-Hunt. It features the new positive lock to prevent the legs from unintentional closure during use, along with a release button. Legs screw in and are also adjustable with improved, friction locks, doubtless developed from the Sentinel tripod. All clever stuff and I can’t wait to get stuck into testing. Keep an eye out in the October issue of Shooting Sports.