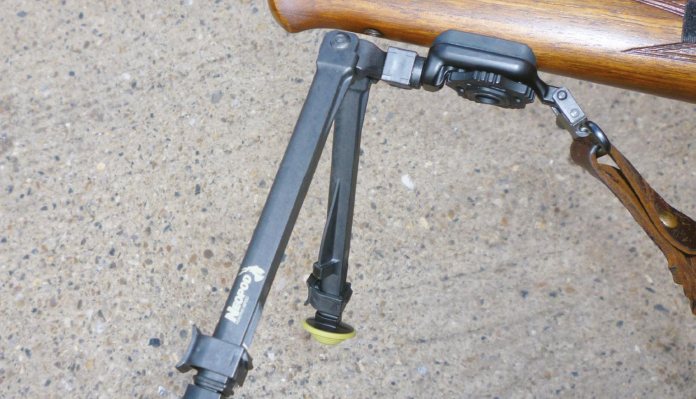 Country Sports Wholesale recently invited me to a press day and one of the products being demonstrated was a very clever little bipod. Now, there are loads of bipods on the market, usually made from steel or alloy tubing and are fairly conventional affairs; the Steinert NeoPod however is very different! Most of the pods I have weigh around a pound and I’ve always thought that was about as light as you could make one but the example I was shown weighs in at around the same as two 12 bore cartridges!

The actual bipod section weighs 2 7/8 oz, or 81-grams and the mounting hardware is 1¼ oz, or 36-grams. All up it’s only 4¼ oz or 117-grams. Compare this to a Harris at 14oz/ 398-grams and it’s a real flyweight. The only thing that comes near it is the magnetically attached Javelin Ultralight at 125-grams, but that is not a universal QD stud fit.

To be fair, when I first saw it, I thought it looked a bit flimsy and might have been OK on a lightweight pre-charged air rifle. But a rimfire or fullbore would make it buckle under the weight just trying to support the rifle, let alone be used in the field - how wrong I was! You see, the NeoPod is made from a rather clever thermoplastic polymer called Polyether Ether Ketone (PEEK), reinforced with carbon fibre; though I think PEEK rolls off the tongue a tad better! PEEK is said to be twice as strong as stainless steel but half the weight of aluminium and is usually employed making replacement vertebrae, hip and knee joints, as well as all manner of automotive and aerospace components.

The legs of the unit are moulded and as I mentioned earlier, don’t look very strong but try as I might I couldn’t damage them. They are attached to a central yoke, which is fitted to the rifle via a lightweight, aircraftgrade alloy spigot. A collar is placed over the rifle’s QD stud on the forend and a stainless pin inserted where the sling swivel would normally go, the spigot is then secured via a thumbwheel and a handy tool is included to make sure it’s tensioned correctly. You can still use a sling if required, as a mounting point is built into the rear of the spigot.

The legs can be adjusted for length by pressing a small catch and the springloaded inners pop out at 55° to each other and can be adjusted in 7mm increments to compensate for uneven terrain. Vertical height adjustment is from 6.7” retracted to 9.4” fully extended; very much the spec of the benchmark Harris BRS (Bench Rest Swivel). Domed rubber feet ensure a secure footing in all manner of conditions.

The legs are held under the rifle by spring tension as well as small magnets; to deploy them they are pulled down, where they lock into position. To stow they must be pulled down first to release the locking detent. To remove the bipod from the spigot, a catch, similar to the ones that extend the legs, is pressed across and the unit can be stored in a cloth bag that is supplied. I doubt the NeoPod will be removed very often though, as it weighs next to nothing. Once this clever item is fitted to a rifle, it’s almost as though it’s not there at all and it completely transformed the weight and handling of my Anschutz .22 Hornet calibre foxing rifle.

I’ve used the NeoPod on many occasions when visiting the farm over the last month or so and it’s done everything it’s meant to do, with solid support when shooting and virtually disappears when you’re carrying the rifle due to its light weight and lack of bulk. There’s 40° of cant available, so levelling in position is simple, plus the legs can be adjusted if necessary. The rifle remained rock steady when on aim and I really can’t fault it. I’ll be attaching this clever little item to my Southern Gun Company Speedmaster straightpull AR15 and using it throughout the next Civilian Service Rifle winter league. I’ll be shooting in the ‘Practical Optic’ class, where bipods are allowed and I’m sure it will provide a perfect support when shooting prone but won’t add too much weight when running from one shooting position to the next. Equally importantly it won’t impede my standing and kneeling shots when folded out of the way and the lack of weight will be welcome.

OK, all this lightweight polymer technology and superb design doesn’t come cheap and at a price of £299 may make a few people reading this recoil in horror! However, there will be others who think ‘I’ll have one of those’. They’ll be the shooters who’ve, A - got the money for whatever bit of shooting kit they want and B - those who see the NeoPod bipod as being just the thing for their lightweight stalking rifle. Shooters can quite easily spend a couple of grand on a rifle/scope combination, so when compared to that, it might not look so expensive. I look forward to using this clever bit of kit in competition and I’ll report my findings later in the year.