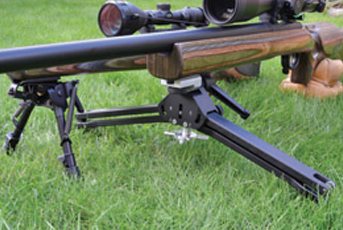 The growth in popularity of F/TR target shooting, with rifles dependant solely on a bipod rather than a pedestal rest for support, has seen the growth of a whole new market sector for suitable kit. Initially where the 6-9” Harris was king, the wide stance F/TR design has now grasped a niche in the market and it’s great to see a responsive UK manufacturer has quickly tagged onto the trend.

PROUDLY MADE IN THE UK

Third Eye Tactical in West Yorkshire after only 3 years in business have continually shown a speedy manufacturing approach coupled with an ear firmly to the ground, both with target shooters and keen hunters. The new bipod instantly appears to have followed its stable mates, offering what is needed and none of what isn’t. With ski-style feet mounted on double wishbone arms, it is designed to support a heavy target rifle with a maximum lateral spread of 48cm. The feet always remaining perfectly vertical to ensure consistent recoil control.

At this low setting the underside of the rifle is a mere 13cm from the ground but allied with a progressively narrowing span to 37cm, this 810-gram unit can raise your gun as high as 25cm from the deck. Made of burnished 6082 aluminium, hard anodising up to 40 microns thick ensures a long life of environmental resistance coupled with the light weight required from such a product to comply with F/TR’s strict all in weight limit of 8.25kg.

More critical controls lie on the central support and axis of the mechanics which feature locking knobs to control the tension on each upper arm, a `Bristol` locking handle which controls cant locking the bipod in position. One of the nicest controls is the underside capstan which rotates about its ball bearing guided axis to control precise elevation. Close inspection of the build shows smooth externals, intricate internal machining to reduce weight yet fully maximising all mechanical strengths from CAD designed components. All wishbone pivots show polymer bearings rotating on steel axles and beautifully threaded inserts are steel to guard against over tightening.

USED IN THE FIELD

I was pleasantly surprised to see and hear of a fair number of serious vermin controllers starting to adopt this style of bipod and after testing it I can see the benefits available as long as its reduced portability can fit in with your transportation or shooting style. Initially offered to fit an Anschutz accessory rail, the newest models also fit onto a standard QD sling stud.

All controls were within arm’s reach from the shooting position and once set up, no unwanted movement was detected other than the crescent feet sliding smoothly as desired on the grassy firing point. I found with a rifle on this and a rear bag, an approximately level gun could be set up with the unit set virtually on its lowest/widest setting, hence very stable with firing barrel torque unable to upset it.