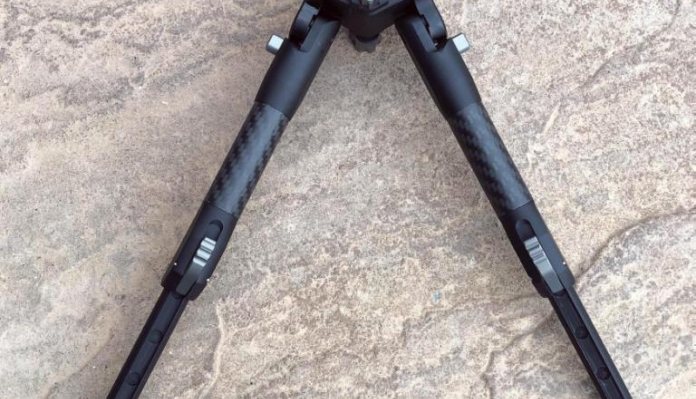 There are many, many different bipods on the market but I’ve never seen one as exquisitely designed and made as the Tier One Tactical Carbon Bipod! Now, that’s not something that I thought I’d ever type, but it’s a fact. Tier One have a fantastic reputation for quality products, Picatinny rails, scope rings etc. so it shouldn’t be at all surprising that their bipod should be of a similar quality.

Made from high-spec 7075T6 aluminium and carbon fibre for the leg sleeves for superior strength to weight ratio, it is flawlessly machined on state of the art CNC machinery to exacting tolerances before being hard coat anodised. The swivel body hinges on the top section that has a quick release catch that allows the unit to be fitted and removed in seconds via a small thumb lever that is locked in the closed position by a silver/ grey sliding catch; when in the locked position, the lever clamps the bipod to the rail securely but when you want to take it off, you simply slide the catch back, which allows the lever to swing open.

The bottom yoke rotates around a central pivot and the tension can be altered via a small thumbwheel on the back, so that the user can choose how freely the lower portion moves. An optional Pod Lock is available that replaces the thumbwheel and I must admit that I found it easier to use than the standard fitment and you can lock the two parts into position more securely and even lock it completely if required.

The legs, when not in use, lie parallel to the rifle stock, facing forward but I guess you can have them pointing to the rear if that’s your chosen style. The legs simply swing down into position when they are needed, where they lock with sprung catches; to stow them again, you just press the catches in and close them. The legs are adjustable for length by pressing serrated catches on the bottom, whereby the inner leg section pop out under spring tension; there are three machined ‘divots’ 20mm apart and the legs can be used in three positions (other than fully retracted) to suit the application. The legs can of course be extended so that they are not equal lengths, should the terrain be particularly awkward.

The standard rubber feet can be replaced with either skis, claws or spikes, by simply pressing in on the tiny sprung catches (rather like those found on some tent poles but much, much smaller!) and pulling them off and swapping them over.

The example I’ve been testing is the 180mm version, which is adjustable from 7- to 9-inches but there is a larger (230mm) option that goes from 9- to 11-inches. There are also 50mm leg extensions available at £45 that clip on in place of the feet. I’ve used it on an straightpull AR carbine when foxing and a Weihrauch HW110K PCP air rifle (reviewed in this issue) and it was perfect and I really can’t fault it. The legs flip down easily when needed for a rock-steady shot and stow away securely when walking and at only 11-ounces/300g, it doesn’t add too much weight. The optional Pod Lock makes life easier but I’m sure that most people will be more than happy with the standard knob.

At £289.50, these bipods aren’t cheap, but they are wonderful bits of kits and should last a lifetime. There are a host of options and accessories available, so that the user can customise them to suit their needs but straight out of the box they are an excellent product.