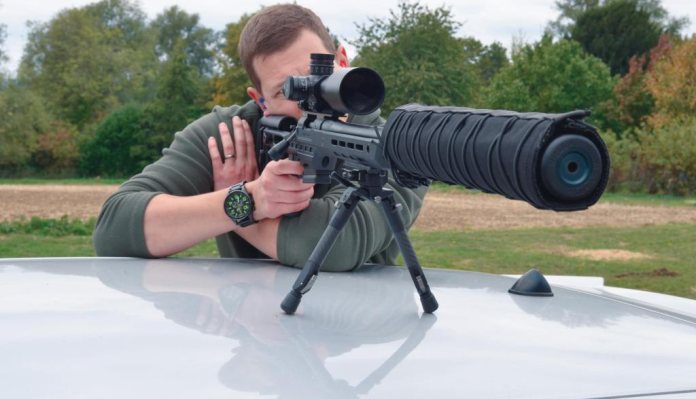 Bipods are a crucial piece of equipment, having a significant impact on stability and therefore accuracy. They come in all shapes and sizes, with various models being focused towards target shooting and others for field use. When using one out in the field it does not take long to come across a wide variety of conditions which highlight limitations in a design. To complicate things, shooters have different requirements from their equipment, based on what they do and the terrain they are on. Factors such as weight, strength, height, mounting options, tilt, pan, footprint, recoil management etc. must all be considered. Tier-one have taken up this challenge and created a line of mil-spec pods that, with the help of a host of accessories, can be adapted to user-specific requirements.

These products are modular, consisting of two main components; the adaptor and the legs. There is a choice of a high (9”) or low (7”) version, both constructed from 7075 T6 Aluminium due to its high strength to weight ratio. This is then mil-spec hardcoat anodised, the stainless-steel components have an oxide coating for maximum corrosion protection. With weight being an important factor, there is also the option to spec the pod with carbon fibre sleeves, meaning the smallest model weighs just 318gms, while a Harris S-BR weighs around 397gms. Every little helps!

During use, some supports can collapse due to heavy recoil, or when lateral load is applied by the rifle. The manufacturer’s design allows the legs to be deployed silently, without the need to push a button; once opened, they are locked in position while in use, then collapsed using the buttons positioned at the top. They are also spring-loaded, extending under pressure from internal springs, making adjustment while in the prone position much easier. There are stops machined into each and height is controlled by sprung aluminium tabs on the front. This gives them a range of between 9”-13” on the high version or 7.5”-9.5” on the low. However, there is also the option to add 2” extensions while out in the field if required.

With such a wide variety of mounting methods being used on rifles today, the modular design of this system means that it can cater for most of them. The chosen adaptor is secured to the legs via a removable pin positioned in the centre, which acts as a pivot point and provides the ability to tilt the rifle by up to 12° in each direction. The tension is controlled via a knurled knob, or optional pod-lock lever, which can be retrofitted. The ability to pan can be specified as well, a useful feature when observing moving targets.

There are currently three adapters to choose from, with the most popular being the quick release (QR) Picatinny (PIC) because of its versatility. A piece of PIC rail can be attached to most rifles, including those with wooden stocks, M-LOK and even Anschutz UIT rails. The well thought out QR clamp can be adjusted in width depending on the tolerances of the rail it is being attached to. It is secured using a robust, side- mounted lever, which includes a machined tab, which locks when closed and requires manipulation to open it again. This helps avoid any accidental disconnection when in use.

If adding a PIC rail to the base of the rifle is not possible, then there is the option of a sling stud adaptor, which has the added benefit of being a lower profile than the QR mount, but it does not allow quick attachment. This option is made up of various components, the first is a cylindrical drum with an external thread that simply slots over the rifles existing sling stud and is held in place by a pin. The adaptor is then positioned over the drum and secured in place by screwing on a circular knurled piece. This can be done up by hand or, using the tool provided, to really tighten it. The legs are then connected, which completes the setup.

The final option differs from the others and is specifically designed for Blaser R8 and Sauer 404 rifles. The front sling stud from the forend is removed and replaced with a connector, which also doubles as a new sling attachment point. The bipod, along with its adaptor can then be slotted into the connector on the rifle and secured using a small catch. A very neat and tidy design that still offers tilt, but no panning.

The legs come fitted with rubber feet as standard, a good all-round option for most terrain, but they are essentially a Jack of all trades, master of none. They can sink in soft ground and can hop on hard surfaces, resulting in reduced accuracy down range. The design allows them to be easily swapped by depressing a spring-loaded pin with a tool, or even the tip of a bullet and replaced with one of three options. The spiked feet are ideal for use on grass or soft ground and allow the user to forward load, a popular technique to reduce the effects of recoil and improve accuracy. Skis can be used on a bench or hard flat surface, allowing free straight-line recoil. Finally, the claw feet, ideal for soft surfaces because of their increased footprint and ability to pivot, compensating for uneven ground/objects. They are also capable of reducing hop and allow forward loading, just don’t use them on your bonnet!

Following continuous development, Tier-One have successfully released a robust, high quality and effective bi-pod system, along with a range of accessories that helps it perform at an optimal level in a wide variety of situations. As I write this, they have also just released a larger, more expensive model; you could even call it evolution!