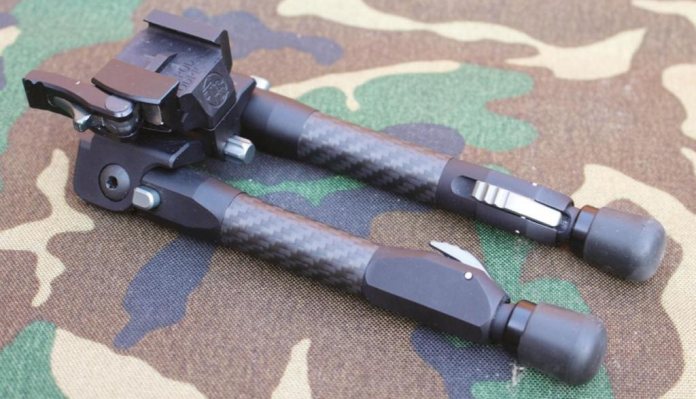 Of all accessories, available to the shooter, a bipod must be amongst one of the most popular and of course useful. For years, we’ve had major name brand, traditional design pods that have served and continue to do us good duty in many situations. However, like all other aspects of the hardware we use, advancements in manufacture and in this case also design, sometimes results in better and more attractive options.

That brings me nicely to the Tier–One Tactical Carbon Fibre Bipod, which is a top-class example of how technological advancements can bring us something rather special. Available in two heights of 7 – 9” or 9 – 11”, The Tier-One is CNC machined from 7075T6 Aluminium then hard coat anodised or (as shown) you can choose the model which also uses carbon fibre for the upper leg assemblies – these ‘sleeves’ obviously hold the extendable/retractable legs. I tested the 7 - 9” model and, despite having such a solid build, it only weighs a comfortable 11oz, an important consideration for the hunter.

The base/mount is neat and compact and configured to fit a Weaver/Picatinny style rail, which isn’t too limiting, as they’re now becoming the norm on centrefire and even rimfire firearms but are becoming increasingly common on PCP air rifles too. It attaches to a suitable underslung rail using a generously sized lever cam lock that sits on one side of the base. This unit has a swivel (pan) and cant (roll) facilities, plus you can alter the tension or lock up completely, using the rather odd shaped but aggressively edged thumbwheel attached to the rear of the main pivot pin. As the ‘wheel’ is quite small, there’s an optional Pod Lock lever available that replaces it and I’d reckon it’d be a good after sales investment for the sausagefingered and cold weather use.

The upper legs deploy from the resting/ready position using generously sized, stainless-steel push buttons found on the top outer edge of each. When used, they lock out and down into position positively and with a solid feel. To release the retractable sections for further height adjustment, there is a large, finger-friendly silver/ grey rocker style catch on the forwardfacing edge at the bottom of each carbon fibre sleeve. Once pressed, if not held under your control, these release the leg fully, to shoot out under spring tension to its full length.

Including the lowest position, there are 4-preset height increments machined into an inner track in the lower legs, which raise the pod approximately 6”, 6½”, 7½” and 8¼”. There are many accessories available, such as replacement feet for the standard rubber boots, which include spikes, claws or skis for various surfaces. 50mm leg extensions are also available and of course the Pod Lock mentioned earlier. Also, the manufacturers have just increased the accessory list, by adding a low-profile Sling Swivel Stud Adaptor. A nice touch is the carry case the pod comes with is already configured to hold and store any accessories you opt to buy.