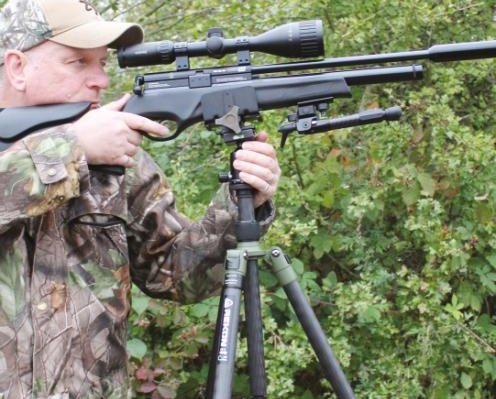 If I can, I try and take as many shots as possible prone off a bipod, as it offers possibly the steadiest position. If this isn’t possible for some reason, then I’ll sit, kneel or use some form of improvised rest, such as a farm vehicle or piece of machinery, gate or fencepost. I don’t usually shoot standing unsupported, as I just don’t find it stable enough; for me, if this position has to be used, it’s best done off sticks, be they single, double, three-legged, or even quad-types. All of which are familiar to hunters in the UK. However, what about something more substantial and, for that matter, technical?

I’ve recently been testing a system that allows the user to shoot from any position imaginable, without the usual wobbles and uncertainty of sticks! Called the Rekon Tripod, it’s made by Wicked Lights, who produce the superb A617ic Predator Hunting Light, so they know a thing or two about quality shooting accessories. The whole kit consists of the multi-adjustable, carbon fibre-legged tripod and the optional ‘Pig Saddle’ gun clamp.

The tripod was originally designed for military and police snipers, but civilian shooters can obviously benefit from this system as well. When completely stowed and with all the legs retracted and folded back at 180º, the overall package is only around 18” long and, as it is made from a combination of magnesium alloy, high-strength polymer and carbon fibre, it weighs in at 5 lbs or 2.3 kilos. These compact dimensions and low weight make it eminently portable and it comes with a carry/storage case and a removable, padded strap.

The top consists of the alloy, ‘BH-1’ ball head that swivels 360º and allows for cant, elevation and depression; it has a knurled locking screw that secures the ball in any position and it’s rock solid once locked. Another, smaller knob is used to stop the unit from rotating. Two small spirit level bubbles allow perfect levelling, should it be required and there is a cut-out in the head that allows the ball to tilt back at 9Oº for storage.

On top of the ball system is the clamp that allows fitment of the Pig Saddle, which is a mini ‘vice’ that securely holds any rifle’s forend, using the large, alloy, three-legged knob; the clamp opens up to 3¾”, so I would think that this is more than enough for most rifles. Protected is supplied by rubber inserts and the gun is held extremely securely, without damage being caused. The Saddle simply slots into place, where it is fixed in position by the thumb wheel.

The base of the ball head is threaded, so that it can be attached to the ‘ballhead plate’ that screws to the ‘centre axis shaft’ that slides up and down in the yoke that holds the three legs. The height can be adjusted to suit the situation and locked in place via a large, rubber-coated collar. Two lengths of shaft are included (4.5” and 13”) that are easily swapped by unscrewing the base and sliding them out; the shorter one is employed when the user wants a lowprofile, when going prone, for instance.

There’s a handy hanging hook on the bottom of each one, that allows you to hang your shooting bag out of the mud and to add extra security and stability by anchoring the unit even more firmly, especially on soft ground.

The three legs consist of four separate sections of carbon fibre tube, which looks to be top quality material by the way and each lower section has a rubber foot that can be unscrewed and replaced by a spike if required. This allows it to handle both hard and softer surfaces like rock and earth, spikes are normally included according to the website, but none were evident in my test sample. The sections are deployed by unscrewing the rubber locking collars (similar to the one that adjusts the height of the shaft) and are very easy to use and lock securely.

Maximum height is 69”, depending on the angle of the legs. These are extremely secure once set in position and they lock into cut-outs in the main, yoke housing. Black, sprung catches are pressed down to enable the angle to be altered; from the vertical, to roughly 30, 45 and 80º. With the short shaft employed, the tripod can be opened right out, as I have already mentioned for prone use and is very stable in the field.

The Rekon has another trick up its sleeve, in that one of the legs can be unscrewed from the main housing and used as a monopod, neat! To make it easy to identify which one is removable, it has a black top and a sticker that says, ‘Removable Monopod’ (which certainly helps!) and has the large ‘Rekon’ sticker on the front. Once unscrewed, you now have a very handy, 58” monopod, but I can’t see the point when you previously had a perfectly stable tripod! Yes, I know it’s lighter than the tripod but it’s less stable and that’s the whole point of the unit in the first place; OK, minor personal niggle out of the way, how does the Rekon Tripod and Pig Saddle perform?

During testing, I found that the Rekon is absolutely rock solid on aim! In fact, the view through a scope takes on the appearance of a photograph with a crosshair on it; it really is that steady. The Pig Saddle has clamped all sorts of forends, from traditional walnut sporter stocks when zeroing my foxing outfit, to synthetic air rifle furniture, when carrying out some feral pigeon removal at awkward angles in barns. I had no hesitation carrying my rifle short distances whilst still clamped in the Pig Saddle and absolute confidence was provided. Bad weather and prior commitments meant that I had to send this great unit back before I could spend a decent amount of time with it, but trust me, it’s a great bit of kit and you won’t be disappointed!

There’s also a second option; the Arca Swiss Tripod Adaptor. This is essentially a Picatinny clamp aimed at AR15 shooters and attaches on any 6 O’clock rail on the forend. It is £130 cheaper over the Pig Saddle tripod, but it’s less versatile too.