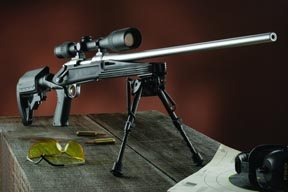 If you read the February 09 issue you will have seen a mention in News of the Blackhawk/Knoxx recoil-reducing stocks. There are four versions – two for /gun-reviews/shotguns/semi-pump-shotgun the SPECOPS and the COMPSTOCK and two for rifles the COMPSTOCK and the AXIOM, plus a spin off design for the Ruger 10/22 – the AXIOM RF. This month I’m looking at the smoothbore furniture, with a promise from importers (Edgar Brothers) of the rifle designs to follow.

Given the general lack of popularity of the pump-actions in the UK, I feel the rifle stocks will be of far more interest. However, as a test bed for the system the shotgun furniture really showed what they are capable of. Knoxx do not make anything for semi-autos, as most designs feature a return spring in the butt, which is not compatible. Plus on a self-loading mechanism you might find there is not enough resistance offered to allow the action to cycle reliably.

Knoxx offers furniture for three great pumpers - Remington 870, Mossberg 500 and the Winchester 1300. I own an 870, which is my field gun, that I mainly use for close range foxes with heavy BB loads and general rabbit bashing with #6-types, plus I have permission for slug (overseas only). Ammunition choice went to Expresses’ snotty and ultra snotty 36 and 50-gram BBs plus Remington, 12-gauge Slugger and some more sensible bird-type loads.

I love my old 870, for its strength and reliability but it can be a bit kicky with heavy loads so the Knoxx stocks seemed well worth consideration. The system works on a form of bell crank operation and offers a true recoil mechanism, simpler but no different to what you would find on tank or artillery equipment, in that it disipates the kick, then returns (runs out) the gun to battery (firing) position again.

The mechanism consists of a heavy expansion spring, crank and connector. The SPECOPS looks like the CAR15 stock with its adjustable length of pull and pistol grip and has two reduction systems. The main is in the grip with a secondary, inertia unit in the buffer tube.

The COMPSTOCK uses a conventional butt layout with a larger version of the system. The build is in two pieces, with the rear section telescoping over the front to give the recoil reduction. Put simply the gun fires and the fact that the butt is in the shoulder offers resistance. The recoil energy moves rearwards compressing the spring/crank assembly and in doing so dissipates, while at the same time storing energy in the spring for the run out.

With the SPECOPS there is no room to fit the system into the butt, so a smaller version is located inside the grip. Here to achieve the recoil/compression effect there is an aluminium end cap that screws on to the rear of the gun’s receiver, which is forced to move up a ramp. This offers a slight change in direction from the recoil path so combines with the crank to reduce the kick. The second spring mechanism in the buffer tube backs this up to give an inertia-type effect.

Before we go any further you must be aware that the guns on firing physically move rearwards in relation to the butts, which as I discovered is initially a very odd sensation. Edgars sent me three items - the SPECOPS and COMPSTOCKs, the latter includes a replacement rubber forend and the POWER PAK, which is an accessory kit for the former design.

In the case of the SPECOPS fitting is easy, as all you do is remove the standard butt and offer up the new one. This comes complete with new stock bolt and a long Allen key to tighten it down. The COMPSTOCK is a bit more awkward as you will need an 11mm socket with long extension as well as a long/slim Phillips screwdriver and a special tool to change the forend over. None of these are included…

A new stock bolt/washer is supplied along with screws. Here you must separate the front and rear section of the butt and the recoil mechanism. With that done fit the front (pistol grip) unit to the receiver, then screw the mech to this, finally screw on the rear/recoil pad unit. It’s easy, but without the right tools you won’t get it done.

As I have always favoured pistol grips on my Practical shotguns I liked the look of the SPECOPS, plus the variable length of pull makes it easy to adjust if you are wearing heavy clothing in the winter, or light stuff in the summer. The POWERPAK consists of two replacement combs; one standard and the other high for optical sight use, they clip on/off to the butt easily. Plus there’s a 5-round ammo holder and a waterproof storage tube for small items like batteries etc.

I fitted my Remy with the SPECOPS and a 26” barrel and dug out the ammo. First up some #6s, which were very mild, but a deal of recoil reduction could be felt. Then the 50-gram BBs, which are really nasty in every gun I have shot them in, with the exception of a Benelli M2 with its Comfort Tec stock. So bad are these that they have given me a flinch and I don’t use them despite their considerable power and long range ability.

The recoil characteristics seemed to come in two stages. On firing you got the first and initial snap of this heavy load at the front, which could be felt in the supporting hand. This was then near instantly dialled out by the barrelled action moving rearwards and the reduction mechanism coming into play. I put this down to the resistance offered by the ramp the gun has to climb. Run out was very fast and near unnoticed. With slug it was no different, the overall effect was of the gun just about to kick the hell out of you then changing its mind, weird…

The COMPSTOCK with the BBs and Slugger gave a far more controlled recoil cycle, which was moving straight back to compress its larger/single unit. However, it was not without its own idiosyncrasies as you can feel the gun recoil, then stop before it runs out into battery again. It could best be described as bang, thud and slide as it came to rest then returns.

There was however, no doubt about the system’s ability, as felt recoil and muzzle flip are significantly reduced. OK the 50-gram BBs and Slugger are at the extreme end of the scale, but with the Express 36-gram BB load the improvement is excellent and less noticeable too. So even a days shooting #6s or similar could be improved by the use of the Blackhawk/Knoxx system.

We are told that the COMPSTOCK reduces felt recoil by 54% with the SPECOPS near doubling that at 95%. To be honest I could not feel the extra 41% improvement of the latter system, as though both offered their own distinctive signatures; they worked equally well in my opinion.

For me it’s a split decision, as I like the control offered by the pistol grip and the adjustable length of pull of the SPECOPS is very useful too. However, the standard layout of the COMPSTOCK makes it very shootable and far more acceptable, plus the new forend completes the package and is preferable to the standard wood for a field gun… The last real strongholds of the pump-action are doubtless Practical Shotgun, wildfowling and maybe even pigeon shooting. All of these offer either high round counts or heavy loads, which do result in the shooter feeling rather beaten up at the end of the day, so anything that can reduce that is not a bad idea…

We Reckon:
• A working solution to recoil problems
• Practical designs
• Well worth a look