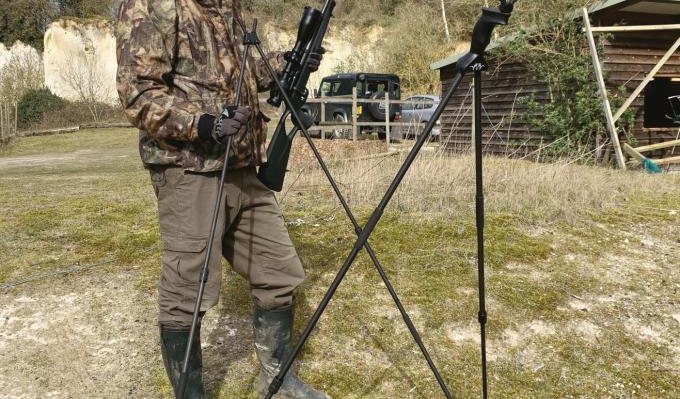 There are times when you are not up a high seat or have the luxury of going prone off a bipod, both of which offer stable supported shooting positions; so, what’s the answer? Well, some form of support. I remember making a basic tripod, using three cut down broom handles lashed together with Paracord and, although looking very Blue Peter, it proved most practical. Probably at the inception of sport hunting with firearms, the single stick was born, which did double duty as a trekking pole as well as a support; not ideal but it works for some.

Time moves on and people get more creative; garden canes lashed together at the top offers a super bipod or tripod, which is great for shooting deer in tall cover. Then the industry takes over and today have a plethora of options from basic to hi-tech. My choice has always been tripods, as I feel they give the best free-standing support possible, I use two – Primos’ Trigger Stick Gen 2 that allows instant, all-leg height adjustment and Spartan’s Kapita. Although not new, a further development was the quad sticks, which is a bit of a misnomer, as in most cases they are essentially two, tall, linked bipods that fold out sideways with front and rear stock supports, that when deployed offer two points of ground contact, combined with a far more stable shooting position.

They are lighter and easier to carry and deploy than a tripod and today they seem to be popular with many stalkers. BushWear, for example, shows a number of options from their cost-effective model of what looks like a SeeLand design, and others at varying prices. New to this marketplace comes Blaser of Germany, with their Carbon Shooting Stick. In essence, the majority of these designs are similar, but some show marginally different features and materials.

Last year, I was invited to Scotland by Blaser for some hind stalking; my tale of woe and triumph was in the April 2020 issue. Part of the trip was a bit of range time to look at their new calibre, 8.5x55 Blaser and also the Carbon Stick. Some of the varied designs I had seen/used in the past did not fill me with joy and I got a bit of a complex about quads; and although essentially the same thing, the features of their product won me over a little. Frederic Hanner, Blaser Group (UK) CEO sent me an example, which I have been testing and I have to say I was more than a little impressed, so much so I am going to buy a set; now, I don’t say that often!

The Stick comes in a cute little carry bag with shoulder strap and external, zipped pouches and includes a Blaser Carbon Bipod replacement spigot that can be used in conjunction with the special R8 end cap, plus a more universal, rubber-covered fork to support the forend. Either option just plugs in. The build shows front and rear polymer support blocks that the leg sections hinge on. The rear is just a simple V that the underside of the butt nestles into; the front, however, is very different.

Rising from the front block is a full-sized, ergonomically shaped pistol grip that mounts the spigot or forward cradle. Clever, but even better is the fact it can rotate 360º, which, as we shall see, allows you to traverse the rifle left and right easily. Similar sticks use a flat, open U-plate, which I have always found to give less stability in the aim. The leg sections comprise of four, sliding, carbon fibre tubes that allow length adjustment and are locked/ unlocked by four, rotary friction collars; for the idiots amongst us are marked OPEN > and < CLOSE. In the centre of the legs are four foam sleeves, to enhance grip when carrying and when stowed a rubber strap keeps them together. At the base are two aluminium blocks with short, pointed blade-type feet for digging into the ground, these are filled with rubber that the bottoms of the legs hinge in. Measuring 45” when stowed, the Stick weighs just 2lb 3oz and is easy to carry.

Deployment is just a matter of flipping the legs to the required width and then letting the front section fall forward to allow the rifle to be dropped on top of the supports. Here, the rubber inserts in the bases limit this movement, so that they don’t fall flat. This can be accomplished one-handed with a bit of practice, allowing the other to unsling the rifle and position it. I found it easier to pre-set the leg length to suit my height, as doing this out on the ground is timeconsuming; especially if a target presents itself unexpectedly. The stick at full gape offers a height adjustment of approximately 42 to 68”, so could be used from sitting. However, you can reduce the footprint if you wish by bringing the legs together, which will increase height. I’m 6ft 2” and found I needed to go down a little, even at full gape. In use, the position is very stable and, by leaning forward or back, you can easily change the gun’s attitude for an angled shot. Equally, by lifting a leg, it’s fast to make a large change of angle.

What I really liked was the ability to steer the rifle left or right using the pistol grip. At 100m, I’d say that you have an arc of about 35-40º, giving a rough frontage of around 25m, which can really make a difference getting on target fast and effectively. The forward yoke holds the forend securely, as does the rear. I swapped to the Blaser spigot and found it was significantly smaller in diameter than the socket it fits into and did not give as much support. I like the idea but will get someone to run me up a better dimensioned replacement. At a push and when stowed it can still be used as a single stick and in this configuration makes an acceptable trekking pole. Overall, very impressed, although it’s the most expensive at £243 by around £50, but hey you’re worth it!