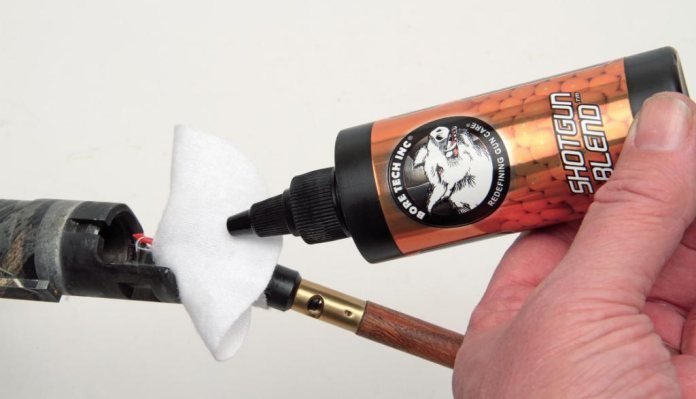 I suspect shotguns have a tougher life than rifles with regards to regular cleaning, as often after an evening walk around the fields, the gun is unloaded and put straight back into the gun cabinet without cleaning the barrel. With their high volume of shots, clay shooters are even more prone to a dirty bore that will affect performance. So, it’s nice to try something new that is designed specifically for shotgun users and aimed at achieving the best possible cleanliness in your gun’s bores.

I use Bore Tech’s Rimfire blend and Cu2+ bore cleaners in my rifles and so their new Shotgun Blend barrel cleaner is of real interest. Specially formulated by the Bore Tech boffins, it cleans not only lead and powder deposits but also the dreaded plastic wad fouling from your barrel. Particular areas of high fouling build-up, such as the forcing cones and choke tubes, are easily dealt with and are left looking like new. It is just at home for the casual rough shooter as it is for game or clay shots, whether you shoot high or low volumes of rounds, every shotgun deserves the Bore Tech treatment.

This is a proprietary formulation that has been made to feature a combination of chemicals that contains no ammonia, no offensive odours and is also 100% biodegradable. It is designed to simultaneously cut through the layers of lead, carbon and plastic wad fouling that accumulates inside the barrel, so no need for different products. The key points are that the Shotgun Blend is 100% bore safe to the gun and you, contains no hazardous chemicals and produces no odour, making it very user friendly.

These exclusive blends of surfactants literally penetrate the build-up of fouling accumulated in the bore and begin lifting and breaking it down, ready for patches and brushes to remove it. It’s hard-working without being harsh to the gun, which is another good thing, as repeated steps to remove stubborn fouling are no problem.

The product comes in a squeezy-type bottle format that is made of treated HDPE plastic.

It has a twist-to-open nozzle that helps to avoid spills and dispenses a much easier measured portion of the fluid to the brush or patch. Spills are no issue as there is no ammonia and it’s also safer being non-flammable. However, it’s still good practice to use any cleaning products in a ventilated room, well away from flames.

How to use it correctly

Bore Tech Shotgun Blend has its own set of instructions and it is best to follow these as the manufacturer knows what they are talking about. However, it’s alright to mix it up a bit and find a regime that works for you, as you may use more plastic wadded loads than normal, dirty powdered magnums, heavy fouling goose loads or even sabot slugs!

Before starting, Bore Tech states to check the gun is unloaded. You can also take the barrels off if you can or remove the trigger mechanism for safety too.

Now, wet at least 3 or 4 shotgun patches with Shotgun Blend. It’s worth noting that Bore Tech recommend their own X patches, but any decent patches are fine, so long as they are a good fit. Then, individually push them through the bore to remove the worse of the loose fouling and make sure the patches only travel in one direction and don’t reverse in the bore.

Next, you can make at least 10 to 15 passes with a tight-fitting brush saturated with the product, like a nylon or phosphor bronze type, which will really work the blend into the fouling and start to lift it off. Then, you need to repeat step 1 and let the fluid soak in the barrel for 5 to 10 minutes. Every barrel is different (wear, chromelined, tighter bores or shorter forcing cones etc), so adapt this part to suit your gun. Finally, push dry patches through the bore until they come out clean. It’s amazing how much crud actually embeds into the barrel when you think it’s all nice and shiny.

Finally, you can push a dampened patch of Shotgun Blend through the bore before storing the shotgun. This will provide protection against rust and corrosion for up to two weeks under normal storage conditions. For extended storage or in adverse conditions, apply Bore Tech Friction Guard XP Gun Oil or similar protective oil. Then, before using the shotgun again, you simply run a dry patch through the bore. This will remove any residing residue and ensure no obstructions are in the barrel. All good practice.

I used several shotguns for cleaning and they included a Mossberg Duck Commander pumpaction, a Browning Black Shadow and a Savage 210 slug gun. The Mossy gets a lot of abuse and hands up, I don’t clean it as I should. I usually have an A12 sound moderator attached and shoot lots of subsonic VLR rounds through it. Following the Bore Tech cleaning regime, all the built-up or caked on lead and bits of plastic streaking in the barrel were gone, and the barrel was nearly back to new.

The Browning Shadow is well looked after but the usual forcing cone fouling and choke lead streaking would often remain. However, I have to say the Shotgun Blend did a masterful job of removing all the fouling. Using sabots in the slug gun has meant that in the twenty years that I have owned it, I have never got it completely clean. Those sabot slugs or regular slow-moving lead projectiles really foul up a barrel. While using the Bore Tech, layers of lead build-up that looked OK were coming out and best of all was the removal of that really stubborn melted on plastic - yahoo!

I like the way it has the ability to simultaneously cut through the layers of lead, carbon and plastic wad fouling that accumulates inside the barrel. This product is the one-stop-shop for cleaning your shotgun and I would buy the bigger 16oz bottle, as it represents better value for money.