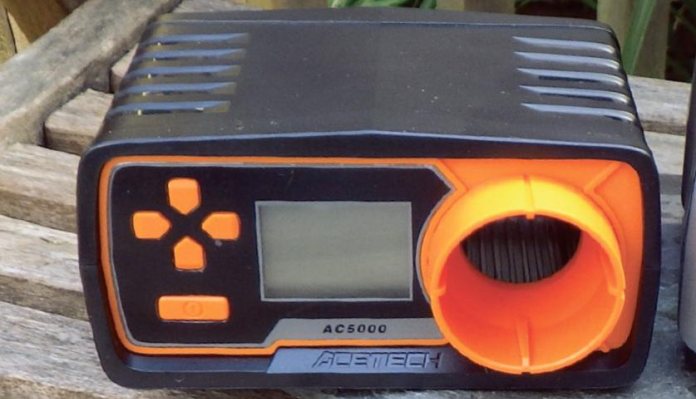 Chronographs are usually expensive and take some setting up, so most shooters probably don’t own one of their own.

The Acetech AC5000 and the AC6000 are a pair of very reasonably priced and quick to set up chronographs with all of the features an airgunner could ask for. Both units are very compact and lightweight, with no external lighting, wire rods or diffusers needed. They are totally self contained and portable making them very easy to use anywhere.

The two models on test are both intended for use with airguns only and pellets are fired through an opening in the body of the unit. The chronograph can be mounted on a tripod or placed on a flat surface and the muzzle of the gun is placed close to the front of this aperture for firing. Readings are displayed on a small screen on the front of the unit alongside the control keypad. The instructions supplied with the units are poor, so it is a case of playing with the controls and finding your way around the menus and functions. This is not difficult and does not take long.

The controls allow you to change the units of measurement, input details of your pellets and set the brightness of the display. There are five parameters for different ammo and each one will hold 25 slots for velocity etc. If you fire more than 25 shots under one parameter the unit will over-write the previous data starting at number 1. The displays are relatively small but as the unit has to be used close to the muzzle of the gun it is close enough to read ok. Both units can be powered by batteries or via a micro USB port

The data produced by the units is calculated and displayed on three screens. Screen 1 displays rate of fire and velocity. Screen 2 shows the muzzle energy, velocity, ammunition details and the number of shots fired in the parameter. Screen 3 shows the data in tabular form for the current parameter. The units can also be used to check you are operating within the legal limits for airguns, which is very useful.

The AC6000 has a larger aperture and a better, larger screen making it much easier to read. The larger aperture does make it less likely that the unit could be damaged by a stray pellet, but care needs to be taken with both units. The AC6000 also uses more IR sensors to capture the pellets travel and generally looks and feels far more substantially made.

Both of the units tested are fantastic value for money and performed faultlessly. Throughout testing they never failed to capture a single pellet fired through them and the data all displayed on screen instantly. These chronographs perform well and won’t break the bank!