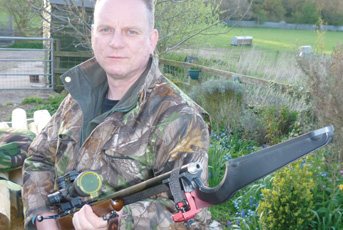 Chronographs usually take the form of a box with optical sensors fitted to the top and the projectile is fired over the unit to determine its speed. This style has a few distinct disadvantages.

The first is the fact that to work properly, it often has to be set up a distance from the rifle’s muzzle and if you’re using it on a range, you have to call a halt to proceedings in order to go forward and set it up. Another problem is that they need to be set up on a tripod, often with screens fitted to enable the chrono to be used in all weather conditions, which makes it vulnerable to gusts of wind. I’ve seen people’s expensive chronographs blown over in the past- not ideal!

The third disadvantage is that conventional chronographs are just so damn easy to shoot; not shoot as in to use, but shoot to kill! I won’t name any names here but I know someone who’s destroyed no less than four machines over the years and that’s just got to hurt; the wallet and the pride…

Whilst on a US shooting forum one evening I came across a news piece about a revolutionary new chronograph that solved all of the above problems in a very clever way, I was therefore delighted to find out later that it was being imported into the UK by March Scopes. I met March’s top man Gary Costello at The British Shooting Show back in February and he was good enough to send me an example for evaluation.

The MagnetoSpeed V1 Ballistic Chronograph takes the form of a tough, plastic, bayonet-shaped item (the ‘bayo’) a display unit and a data cable that connects them. The bayo is 11” long and the display unit is 3 x 5”, roughly the same size as an old cassette Walkman. The bayo is attached to the end of the rifle’s barrel (up to 1” in diameter) by a tough nylon strap and tensioned via a thumb wheel.

There are two electromagnetic sensors built into the upper flat face of the ‘blade’ and it is these that sense the bullet as it passes over them. This action disturbs the magnetic field created by the sensors, a bit like how a conventional chrono’s optical sensors would ‘see’ the bullet as it passed above them. As the unit senses the projectile magnetically, there’s no need to worry about lighting conditions, either inside or outside and in theory the MagnetoSpeed could be used in total darkness. Please don’t!

The first electromagnet senses the bullet as it travels above it, followed by the second electromagnet. This information then travels down the cable to the control unit and the internal electronic wizardry works out the speed of the projectile, which is then displayed on the screen. Now you might not think that a bullet would trigger something that relied on magnets, as they’re generally made of non-magnetic lead with a cupro-nickel jacket. However, the MagnetoSpeed can detect any bullet type, whether they have a lead or steel core, or are solid lead for that matter. This device can even be used with shotguns, with cartridges loaded with shot or solid slug.

To make sure that the chrono works as accurately as possible, the type of projectile can be altered via the control button on the side of the display unit by going into the menu. The menu also allows you to store strings of shots, delete them, change from fps to mps notation and view archived data. Data is stored on a micro SD card housed in a slot in the top of the unit and this can be removed if required and the data transferred to a PC or Mac by using the supplied adaptor. There is another model available, the V2 and this can be used on barrels and moderators up to 2” in diameter. It has an alignment rod, rubber heat shield for use with moderators and extra shims included and everything is housed in a purpose built plastic case. That’s the description over with, what’s this chrono like to use? In a word, simple!

It’s dead easy to attach the bayo to your rifle’s barrel but you’ve obviously got to be careful not to shoot your new toy, so a bit of care is required to align the unit; after all, you don’t want to join the chrono killers club! Setting up is obviously done in accordance with safe gun handling, so remove the bolt and magazine and prove the gun safe before you start. It might also be an idea to tell other shooters who might be on the range what you’re doing, as until these chronos become more widely used (which won’t be long I’m sure) you might get a few funny looks as you fix bayonets!

Two rubber V-shaped blocks are included in the box and these are differing thicknesses to allow the user to set the distance the bayo is from the path of the bullet. The curved cut out in the blade is the ‘Blast zone’ and this needs to be just in front of the muzzle. Once the thumbwheel is tightened, the data cable is used to connect the two main parts together, which automatically turns on the display unit.

The first shot is displayed on the left hand side of the display, as are subsequent shots and the maximum, minimum, and average speed on the right. The extreme spread (ES) and standard deviation (SD) is also displayed, depending on which of these two you have chosen via the menu. As successive shots are fired, the last shot’s velocity is shown at the top and each shot is numbered. The display is clear, with the figures large enough to read and the unit can be stood on a bench whilst you’re shooting using the adjustable alloy stand. I chronoed some .308 handloads and some 5.56 military ammo on the MagnetoSpeed’s first outing and later tested various .22 rimfire brands.

When you get home, you can remove the Micro SD card, fit it into the adaptor and load the data onto your PC or Mac. The info is displayed as a spreadsheet and you can print it out if required.

One good aspect, which normally a 10 ft in front of the muzzle chrono does not offer is the ability to not only do the job but to shoot as normal, as there are no problems with trying to aim over the machine at a distant target. In the long run this will save money as it stops ammo wastage. I was so impressed with the example I was sent that I bought it and you can’t say fairer then that!

AGAINST
Have to remove your moderator