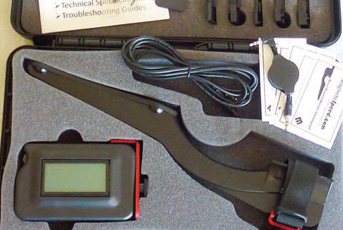 On the positive side chronographs are invaluable to any shooter who needs to know the actual trajectory of his bullets, regardless of what is printed on the box, quoted on the manufacturer’s website, or provided by his reloading manual or software. And for hand-loaders, muzzle velocity may give a crucial warning that you are over-doing things.

On the negative side, because they generally depend on the bullet casting a shadow over a pair of light sensors, they can be fussy about light levels: too bright and they are dazzled; too dim and they are blinded; used under artificial light and they need a special – and expensive - infra-red kit.

They do work most of the time, of course, but only after you have spent a while, in front of the firing point, carefully aligning the sensor unit with the backstop. On a public range, this can try the patience of your neighbours, not to mention your own; all the more so if, after all that, the thing inexplicably fails to “see” anything. Then, of course, failure to consider the height of the scope over the bore, or simply a moment of distraction, can result in a round taking out the “sky-screen” diffusers (if you’re lucky) or of the sensor unit (if you’re not).

Fortunately, all this is now history, thanks to the V2 Chronograph from Magnetospeed, and to F-Class Champion Gary Costello of March Scopes UK, who imports it from the USA.

One key difference makes the Magnetospeed chrono unbeatable: uniquely, its sensor unit uses magnetic induction rather than interrupted light to measure the time it takes for a projectile to pass between two points.

The sensors are housed in a slender polymer platform (“sensor deck”), supported underneath by a curved “bayonet”. At the other end of this is a V-block that aligns the bayonet with the barrel, to which it is attached via a nylon webbing strap and a screw-tensioned alloy buckle.

This means that there’s no longer any need to move from your firing point to set up the chronograph, and also that the device remains aligned with the bore wherever you aim the rifle. The whole thing weighs just 6.25 oz (max.) too, so you hardly notice it. Better still, in testing I was unable to detect any shift in point-of-impact with it fitted, so could shoot groups and measure velocity at the same time, and instantly compare changes in velocity with changes in point-of-impact when shooting at longer ranges.

Readout is via a separate display unit which runs off 4xAAA cells.

Also small and light (2.75"H x 4.50"W x 1.25"D; 4 oz) it has a 2.75” (diagonal) backlit LCD display, a clickable control wheel on the side that lets you scroll through menus and select the required options, and a micro- SD card slot so you can transfer data to a Smartphone, PC, etc.

Connecting the sensor and display units is a cable, with a standard jack connection at each end. Plug the cable into the display unit and it activates automatically.

There are also threaded holes in the housing at 3, 6 and 9 o’clock, which allow an L-shaped alloy “kick-stand” to be attached via a knurled thumb-screw. This is great when shooting prone or from a bench, but it’s all too easy to forget about the display unit when changing position,