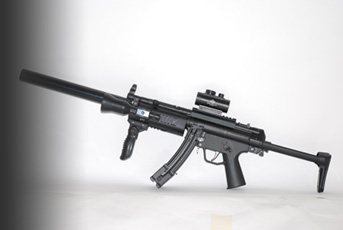 Over the last few months I have tested both of German Sport Gun’s (GSG) 22 rimfire semi-auto rifles. In essence they have made common barrelled actions with look-a-like, MP5 and AK47 bodies. Given the popularity of these hi-capacity, military-style guns over the last few years, GSG have certainly added some exciting kit to this area.

As well as the rifles GSG also offer a big range of accessories and a modification of their standard MP5 – the SD or silenced version (Schalldämpfer). Importers York Guns sent me a cross section of bolt-on goodies plus the SD conversion kit. This model can now be bought as a complete rifle or as an up-grade package for your existing GSG5.

For the Look of the Thing

If you aren’t aware the GSG5 has a mandatory barrel length of 16” for the UK as they also offer an after market collapsing stock, which when fitted would reduce the rifle to under 24” without the longer and very skinny tube. To disguise this a little, a slim dummy moderator is included. On the SD version the can is a bit wider to make it look more like the moderated gun.

York Guns have added to this by getting working moderators made up to allow the guns to be properly silenced using sub-sonic ammo should you wish. They are longer as the extra length up front houses the baffle stack with the SD version being wider; so let’s start there…

The only real difference between the standard and SD models is the width of the dummy silencer and a wider/rounder/longer forend with ribbed rubber surface. This extra girth means the standard cocking handle jams on the left edge of the forend and GSG includes a replacement unit that is scalloped underneath. I have to say they might as well have fitted this to all guns to keep it simple.
SD kit (includes forend, cocking handle & dummy SD moderator) £56
GSG5 SD complete £549
GSG5 standard version £520

To fit, unscrew the standard forend retaining pin and pull off the tapered plastic forearm and remove the sling loop. The standard cocking handle is retained by a screw, which is accessed with the action open and is replaced by the undercut version. Angle in the new forend then snap it up around the barrel. Slide in the front ring support then screw on the can and you’re done. In use the fuller furniture provides a far better hand hold. There are a number of MP5 accessories with options on scope mounts, furniture, butts, magazines, torches, slings, red dots, scopes, lasers and mag clamps.

The tactical forend is large and square and features three Picatinny rails so you can mount a combination of lights, lasers and the foregrip. This one slides on and uses the standard, front cross pin to retain it. The grip clamps onto the rail and can be folded up when not required. Though the ability to fit accessories is good I did find the large size of the forend a bit too much. For me the SD unit strikes the best compromise.
Folding foregrip £28
Tactical forend £56

Probably the most popular item is going to be the telescopic stock, which is a good copy of the original. To fit remove the rear cross pin and slide off the fixed butt. Then slide on the new unit, however, you need to remove the sling bar otherwise it won’t go in. Once in location refit the pin, then re-hook the bar into its two holes. In use the stock length is a tad short, but the retractable MP5 butt look and feel is what it’s all about.
Telescopic stock £47

The spare mag is the standard 22-round unit; the clamp is a Fig-8 design with locking lever that allows two clips to be held side by side. Initially I found the clamp exerts a bit too much pressure and causes the follower to bind, which stops feed. A bit of trial and error showed that this can be sorted by placing the clamp at the bottom of the magazines, so that the lower pressed ridge is in line with the base plate; doing this I had no further problems. Again it looks cool and makes mag changes faster if you like a lot of onboard ammo capacity.
22-round mag £34
Double mag clamp £24

The two live suppressors only differ in width as they are both 13” long, with the SD version being wider at 40 as opposed to 30mm of the standard can. Of the two the SD perhaps gives slightly better moderation effect due no doubt to its bigger baffle stack.
Standard moderator £79.95
SD moderator £89.95

There are two scope bases (Hi/Low and Low tactical Mounts); both are horseshoe Picatinny rails that clamp over the receiver to give a solid mount for a range of optics. The former though showing a higher base has a see-through tunnel below it; hence the name. Scopes include a 40mm red dot sight and a choice of three telescopes that feature integral clamps, illuminated reticules and 3x Picatinny rails. Specs are 4x28, 4x32 and 3-9x32.

On test were the 3-9x32 and Reddot 1x40. The latter is a typical red dot with the 40mm objective giving a good field of view and an 11-position rheostat. Dot size was reasonably round and even at high illumination it did not flare out too much. The scope is a neat little compact that suits either the GSG5 or AK47, with a fully illuminated Mil Dot reticule complete with rheostat. Both optics are of good quality and practicality and I’ll be giving the 3-9x32 IR a full test in the future.
I liked the integral Picatinny rails as they allow easy fitting of lamps and lasers. Overall these two suit the GSG range nicely.
Hi/Low Tactical Mount £56
Low Tactical Mount £42
1x40 Reddot £38
3-9x32 scope £66

I was sent a spare 22-round magazine, mag coupler kit, silencer adaptor, side-folding butt (solid-type) and scope base.

The magazine coupler attaches two mags (one up, one down) by a series of screw-in lugs. Again good if you want more rounds on-gun and like the GSG5 unit you can still use the external follower to aid filling.
10, 15 or 22-round mag £38 each
Magazine coupler kit £14

The silencer adaptor replaces the barrel stabilising nut and offers a ½ x 20” UNF thread so you can fit any standard, rimfire moddy. My gun test of the GSG AK47W last month showed that the rifle did not function with sub-sonics. It would fire, eject, re-chamber but there was not enough effort to cock the hammer. However with a moddy fitted there seemed to be enough back pressure to allow full function.
Silencer adaptor £12

The side-folding stock is a near exact copy of the original military version, even down to the locking plunger in the butt plate. Fitting is easy, the fixed butt is removed along with its adaptor from the rear of the receiver. A new unit is fitted, the folding butt located and a hinge pin driven in. This folds to the left and the receiver has a sprung catch to lock it when it’s stowed. A metal skeleton (triangle) version is also available
Folding stock £65
Folding stock triangle £61

The scope mount is an all-metal, J-type design with a 1” Weaver/Picatinny rail, which sits over the top cover. It attaches to the left side of the action using the standard NV fitting. The J section fits over this with a bar - that locates by twin dovetails - coming up from underneath, with two Allen screws to clamp them together.

The NV base is plastic and a little flexible so you can get some movement with the scope/mount in place if you give it a good twist. However, testing showed that with the negligible recoil of the 22 LR cartridge the optic stays where it should be and accuracy at 50-yards dropped to an easy 1”. Frankly for the sort of use the AK will be put to, this is good enough. But a metal NV base is available, which will sort that out. As an aside, this scope mount is better than the one you can get for the straight-pull AKs, and if it fits my Saiga AK101 in 223 Rem then I’m going to buy it…

For me I’d dress in the following ways: