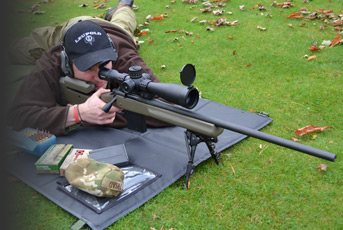 In my ongoing Tactical test run, I have tested some very expensive rifles many of which are outside our personal budgets. I think this kind of shooting definitely opens the door to the skills of the shooter, not just their wallet so what can we find that offers a more accessible entry point?

There is no such thing as one rifle for everything and although an economical purchase, the Remington 700 is often the basis for a starter rifle in the world of precision or competition shooting and there are two very good reasons for this. As it approaches its 50th birthday, the Remy has had no major re-designs or modifications and forms the blueprint for many precision actions built around its dimensional footprint. Secondly, this long life has led to not only an appreciation society but also an absolute goldmine of compatible accessories.

Or SYSS as they become abbreviated have long appreciated there are rifles out there that come from their factories with a great concept but in need of a little polishing; the Remington 700 is a perfect example. On test here is a display showcase of how a Plain-Jane SPS varmint can be transformed into a capable and fun gun with which to shoot not only informal competitions, but depending on specifications required; a stalker or varminter too!

Every Rem 700 that SYSS supplies carries a few minor tweaks, re-crowned barrels, polished bolt rails and general fettling of the action but major function improvement has been done to the trigger. As with any single sear mechanism, shooters run a fine line between going dangerously light and having a reliable sear engagement so the latter has been chosen here. SYSS have fine-tuned the factory unit to give a crisp 3lb break, providing consistent and predictable shot release every time, coupled with correct operation and safety. Learn to squeeze something like this and it’s a valuable lesson that lighter is not always better. Other than this, an oversized bolt knob has been added for easier operation with large tactical scopes and with SYSS’s own extended steel picatinny rail, scope mounting is effortless.

Buy it, Shoot it, Tweak it, Then Take `Stock`

As you enjoy shooting and learn more about what you want from a rifle, the next two steps in the evolution of your project will more than likely be a new tactical stock and a detachable magazine feed (DM). The real highlight on test here is the Manners T4-A, a stock that provides both. Re-inletting any stock, bedding it and fitting the commonly found Accuracy International compatible bottom metal is a time consuming job for a gunsmith so Manners have provided a bolt in solution - but is it better or more economical?

The T4-A features a one-piece aluminium bedding block similar to HS Precision and Bell & Carlson offerings except Manners incorporate bottom metal into the block and bond it into any of their standard tactical or sporting styles. It is called the MCS-DBM mini chassis and will allow either 223 or 308-based AI magazines to be accurately paired with any Remington action (coming soon are options for Tikka T3 as well as Winchester, Howa and Savage).

The stock was tastefully finished in a matt green drab coating that didn’t look like a civilian’s gun pretending to be something it wasn’t. The stippled grip and forend offered secure hold and a single underside stud allowed the easy addition of my usual Harris 6-9” bipod in the forend. Alongside this and also at the rear, two side mounted quick release swivel attachment pockets facilitate the comfortable biathlon type slings that allow flat back carrying when needed
An adjustable cheekpiece using a neat insert bonded into the stock offers both vertical and lateral adjustability, a 1? Pachmyer Decelerator pad fitted along with a selection of optional spacers gives a generous but comfortable 14 ½” length of pull (LOP). The Decelerator sits firmly in the shoulder without vertical slip. Barrel channel inletting here has been correctly profiled to evenly float a Remington varmint contour by 2mm but other options are possible. The forend is stiff and does not flex during use, causing unwanted impact shifts from different shooting positions. The sides and bottom of the forend and the bottom of the butt behind the hook are parallel with the bore to ensure smooth slide and control in bags but if used prone, the butt hook allows the supporting hand to control recoil and precision elevation adjustment.

This rifle was mechanically standard apart from the noted tweaks. The stock was bolted straight on, a scope fitted and a 10-round AI magazine loaded up. Any 308 is an easy rifle to feed and both Remington and Hornady factory fodder of 168gr worked well. A-MAX were superb in this barrel recording a best 5-shot group of 0.498” with an average performance still around the ¾” mark. The weather was awful but I found the rifle a joy to use in a head-head plate shoot, I hadn’t initially been keen on the angular look of the cheekpiece but in use, with quite a large lateral offset it was perfect. What really stood out was how consistently the gun shot which I am usually skeptical of with bedding blocks.

In the course of photographing the internals of the stock I removed the gun and re-assembled it with consistent bolt torque applied. I was dubious of the return to zero as the rear action bolt would only stand finger tightness without feeling as if stress was being transmitted into the receiver but done like this with the front bolt clicked as normal, it was bang on the money. Not a scientific test of bedding (to my mind a critical factor of accuracy) but nonetheless, a reassurance. The mag feed was flawless and also allowed single loading if needed. Initially the vertical pistol grip felt bulky but in use, a thumb-up hold allowed very fast bolt operation coupled with my index finger perfectly positioned on the trigger blade.