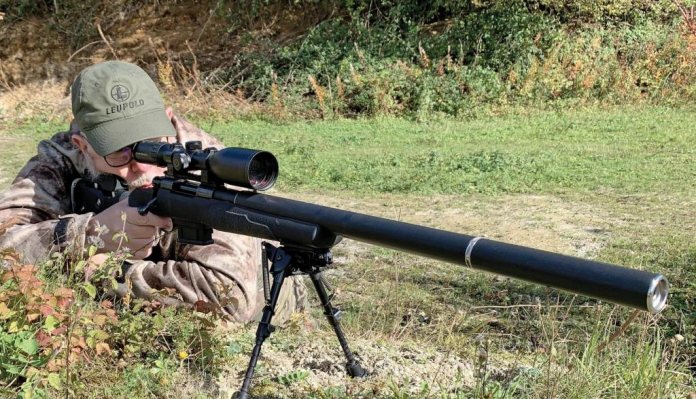 One of the milestones in moderator development, for me, was when Jackson Rifles imported the BR Tuote series (T4, T8 etc) years ago, which were some of the first reflex designs around. After that, we had modular, with the ability to tailor the can for sound suppression, calibre, or size. Recently A-TEC impressed me with their quick detachable (QD) A-LOCK system and their H2 model, but breaking news is their brand new Integral system.

Not long ago, Blaser launched its R8 Silence. They took the standard R8 rifle, cut and re-profiled the barrel to 16.5” and fitted a slim-line, full-length, reflex moderator, then attached a larger forend to accommodate the extra girth. Though they offer a range of standard, reflex moddies, the idea was ultimate suppression, not for stealth, but to protect hunters and even their dogs hearing. Sauer has now done the same thing to their 404 and Steyr with a similar concept called the Breeze on their SM12 and CL II models.

Depending on model options etc, prices range between £3500, to £5000+, ouch! A lot of money for something that by necessity requires a shorter barrel with all the issues of reduced ballistics. This is obviously a new wave of development and I can foresee other manufacturers following suit. But what if you cut out the middleman so to speak? Which is what the Integral is about.

If you want a fully moderated rifle, don’t want to pay over £3K and have a donor gun to spare, read on!

I had been told by Peter Jackson about this new A-TEC design and Andrew, the MD of Riflecraft Ltd, was in the process of making the first conversion. I was down there recently and he mentioned he’d just done the job so let me borrow it.

Point of no return

The donor rifle was a .223 cal Howa 1500 Varmint with a heavy barrel and a 1:9 twist rate. It was fitted in a GRS Berserk synthetic stock, which has push-button adjustable length of pull (LOP) and comb height, plus GRS’s signature, 6º, offset pistol grip. It follows their original Sport Varmint model design, just slightly improved and with more modern materials.

Now we come to the point of no return, as there’s a deal of barrel work and finishing that needs doing to mount the Integral moderator correctly. Suffice to say, it’s not like just getting your rifle threaded for a moddy or screwing on a normal can on a factory-threaded gun. Instead, you will end up with an 18” barrel; measured from gas escape to muzzle, so there’s no going back. Depending on the calibre, you could wind up with a sub-1700 ft/lb rifle that’s only good for small deer and vermin. I’m not sure if I’d bother with .243 or similar cartridges unless I just wanted a foxer/small deer gun!

With the barrel cut, it’s threaded 15x1mm to accept A-TEC’s, muzzle-mounted Integral moddy. Back at the re-enforce a step is cut that the rear bushing butts up against. This stabilises and seals the long, 34mm wide expansion tube, which also requires a bit of girth turning off the barrel’s O/D (outside diameter) just in front of this area. This does not come for free and Peter Jackson told me there will only be a select group of gunsmiths doing the barrel work and fitting, to keep quality and consistency high. So, and depending on the person you choose, prices could vary, plus this will also include the cost of re-proofing too.

So, lets now consider the build. The R8 Silence’s moddy crams it all into a single outer tube that houses the baffle stack at the front with a closed-ended, envelope-type expansion chamber behind. The A-TEC is, instead, in two parts. The 185x34mm moddy has an all stainless steel build with what is a reversed muzzle brake design in its base, in that the multiple vents are angled rearwards, doubtless to direct some of the gases back into the expansion chamber.

Behind this and enveloping the barrel is the 400x34mm OD, aluminium alloy expansion chamber/tube, which is sandwiched between the base of the moddy and the rear bushing butted up to the step cut in the re-enforce. Instructions say that this component must be set in using Loctite 638 or a similar compound, to fix it in position and stop gas escape around this join. There are also twin O-rings set in the O/D of the bush and a third at the base of the moderator at the front for the same purpose.

I have an old PES moderator taken off my .204 Ruger M77 Mk II that sleeved the barrel down to the forend tip. It was not a closed/envelope tube like the R8 Silence but sealed with a rear O-ring instead, which proved efficient. However, the fouling would build up on the barrel’s exterior under this tube and if not cleaned off would coat it heavily. A-TEC also state in their instructions that to combat this, the barrel must be finished off with Cerakote H series for corrosion protection. So, potentially you will have to add that figure on top of machining and proofing, as well as the price of the can (£518). Depending on the generosity, or not, of your chosen smith you could be looking at around £700-800 for the job all-in.

When fully assembled on the barrel, it’s tightened down by rotating the moderator with the supplied spanner. However, there’s one more consideration; the stock! The 34mm OD on the expansion tube needs to be accommodated by the forend and something with a standard, sporting profile, might not be wide enough. Builds like the GRS Berserk, McMillan’s MC3 Legend, or similar, laminate or polymer varmint-types have plenty of meat up front and are well suited to the job. If you don’t have one then it’s again extra cost plus modification of the barrel channel.

Weight on a rifle like this is a matter of personal preference, and the Howa Varmint is not light in its standard 24” barrel format anyway. The length is deceiving as it looks very long. In fact, with the LOP set up for me, it is 46” with 26” of that being the moddy system. So, probably no longer than a standard length rifle with a reflex can fitted.

The 1500 action is nice with a cranked back bolt handle plus tapered knob, a 2-position rolling safety rear/right, with the bolt release, rear/left. The trigger is not bad with just a tad of creep, but a good enough release with a bit of thought. Although from the box it uses a floor plate magazine system, Andrew fitted the Legacy Sports, 5-round, box mag conversion kit. Up top, a Tier One, 0 MOA, one-piece rail, to which I fitted an S&B 3-12x50 Zenith and a Harris BRS bipod to finish off.

Accuracy was not the goal of this test, but how the mod performs, however, it managed around ½” at 100m. I used GECO 53-grain soft tip along with some 69-grain Hornady BTHP Match. The moderator supplied was not for .224” calibres but .30”, so perhaps a bit too much free bore? Out of interest, I used a Schultz & Larsen Venom muzzlemounted can in 8mm as control.

Initial shooting was done outside and there was a lot of reflection from the backstop, making it hard to ascertain the muzzle output. Moving inside the range hut proved more informative, this cut out most of the reflective noise allowing me to hear the can operating. The signature was much more muted, so, without doubt, the Integral was doing what it was designed for. The Venom worked too, but the difference was noticeable in terms of muzzle noise, as expected. A-TEC quotes an output of 28-32 DBC, but my Mk 1 ear was telling me it was more than fit for purpose.

It’s available for the following bore sizes: .224, .264, .30, .338 and .375”. How it would stand up to the latter two remains to be seen, not saying it wouldn’t take it, but all that gas letting off from an 18” barrel makes you think. But as I said, go into it with your eyes open as to your gun’s suitability and the full costs that might be incurred.