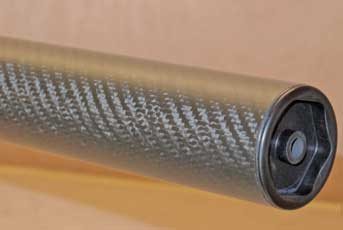 Over the years I have tested most types of moderator in many different materials. However, these days’ criteria have changed with weight being a critical factor, as shooters are now less likely to put up with cans much over a pound on their rifles! So A-TEC’s latest Carbon 02 moddy caught my eye.

It’s light at 320 grams (11.28 oz) though very much a full-sized reflex design at 235 x 48mm with a 155mm overhang at the muzzle. Typical of A-TEC it shows a ratio of 2/3rds baffles to 1/3rd expansion chamber. The outer tube is carbon fibre with the internals being aluminium alloy. There’s no indication of what’s inside as it’s not strippable, but I assume it’s the usual expansion chamber and baffles set up.

A-TEC supply a rear plastic bushing that needs to be drilled out to the barrel’s OD. This pushes into the rear of the moddy where it’s held by an O-Ring. The design is self-tightening with the moddy actually screwing down after each shot! It’s recommended that it’s not left on for the obvious reason of corrosion damage, also that this self-tightening facility might lock it on solid.

Like any moddy the Carbon02 gets hot and A-TEC says this: “Carbon02 is only supposed to shoot up to 10-rounds with standard cartridges in series before it needs to cool down. We have therefore developed a calibrated temperature sticker that will show how many shots you can shoot with your gun before the silencer must be cooled down.” Truth is this is purely a hunting can where its light weight and abilities are designed for only a few shots at any one time.

I would assume that continuous heating will affect the structure of the material as to its physical integrity. On the side of the body is the aforementioned calibrated temperature sticker. The centre is red with two silver dots one above the words STOP USE the other above WARNING. The sticker is a ‘single-use’ item that tells you when you have hit the maximum number of shots for that session (WARNING) as the dot turns black. When this happens you must stop to allow it to cool down, then you can proceed again ad infinitum. Just bear in mind the sticker only indicates once and it’s down to you after that to note the round count and not exceed it!

If you carry on shooting regardless then the ‘STOP USE’ dot turns black, which means you have exceeded and voided the warranty and the carbon fibre outer tube must be replaced. All this sounds a bit off putting, but let’s put it in perspective: A-TEC states the operating criteria and how to avoid problems. Let’s face it you will fire more rounds in your zeroing session than you ever will in the field! I doubt if you are going to kill 10 deer + as fast as you can work the bolt. Frankly I do not see a problem unless you are an idiot…

I was sent a 6.5mm unit, which I put on my 6.5 Creedmoor and decided to take it to the limit and fired 10, aimed shots at a normal cadence. After #5 I checked the warning sticker for the change and it was still silver at #10. I assume that A-TEC use a worst case scenario in terms of what the round/calibre is producing heat/pressure-wise and my 6.5 Creedmoor reloads which run a 120 grain A-MAX @ 2841 fps were perhaps on the low side. But I stopped there and would recommend you do the same as that’s what is says on the tin!

Two things I noticed it gets hot very quickly and retains that heat for longer than a metal can. Also the screw-on effect really works, which stops that problems of it loosening off and affecting point of impact. In use the O2 proved its promise! Most apparent is the lack of weight and good balance. With a 308 Winchester A-TEC say noise reduction is 28-32 dBc, with the 6.5mm it’s 36 dBc. I found it gave a pleasingly and flat note certainly when compared to some other leading brands.