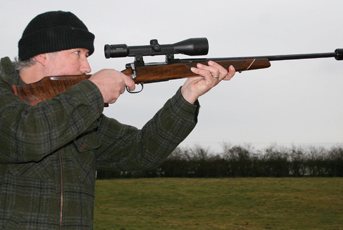 There has been a trend back to the aluminium sound moderator these days, probably driven by the fact that in the search for ever quieter silencers manufacturers were producing heavier or longer mods to dampen the muzzle report. Well sometimes the quietest moderator is not necessarily the primary consideration and weight and length can be more important. Well A-Tec a firm from Norway must have been listening, as their CMM-4 moderator is one such light weight yet effective sound moderator, and it’s distributed by Jackson Rifles.

The CMM-4 is an all aluminium construction moderator of light weight and small size, yet is still effective on rifles up to .308 calibre. Available in a variety of thread sizes to fit your rifle, it utilises a modular baffle stack system that fits directly to the muzzle for most effective sound suppression. In this way the unit can be stripped for cleaning or replacement parts can easily be replaced.  The overall length is 6.75 inches or 175mm with an outside diameter of 40mm and it only weighs 7.75ozs or 220 grammes.

The thread choice is ½ UNF and UNEF and 14mm x1. The exterior surface is hard anodised in black with a small ribbed profile yet despite this it does not retain too much dirt. The CMM-4 as its name suggests had four main baffles and a primary expansion chamber. This expansion chamber is just over 2 inches long with a central spigot that houses the threaded section to fit to your rifle. In this way if you want to use this CMM-4 on a different rifle then all you need to purchase is a new rear section and not a whole new suppressor if the baffle size is compatible. The moderator is available in two sizes, up to 6.5mm and the second is up to .308 calibre.

The expansion camber vents the initial gases into an open chamber before it is allowed to follow the bullet up through the four baffles. The baffles are secured with coarse thread and sealed with o-rings, I am not a great fan of o- rings as they can get damaged but I have to say these have lasted the testing very well with no leaks, little wear and the unit still comes apart easily.

Each baffle is two inches long and consists of a male end that the bullet enters first which has an extended cone and stepped down profile with 1/3rd of the lower section scalloped. This swirls the gases around and slows it up before it vents into the middle of the main baffle section that is essentially the reverse profile of the exterior. This continues for four baffles with the final having an end cap to ensure closure of the unit.

I had the ½ UNF thread .30 calibre version and the internal hole through the baffles was a measured 8.6mm or 0.340 inch and the thread in the end cap is turned in a brass insert to prolong life of the threads.

First thing you notice is that it does not add too much length to a rifle, and its light weight does not alter the feel or handling of the rifle at all.  In fact it’s so light on three rifles I fired it on (two .308 Tikka’s and a .243 Ruger) the point of impact or zero was hardly altered at all which is a nice change and handy if you forget to bring the CMM -4 out stalking as a “bare” barrel rifle will shoot the same.

On a .308 Win with factory loads you are asking a lot of a small and lightweight thin walled moderator such as this CMM-4. However it works remarkably well. It is not the quietest on the market, it’s not meant to be, but in tests I conducted a year ago with a professional sound meter to Mil Spec Std -1474C this moderator gave a 21-22 dB reduction with full power factory loads - more than good enough.

All the muzzle blast is eliminated and recoil is reduced, although the report sounds more than say a Jet -Z compact but this is quite understandable. With 6.5mm baffled version on a smaller calibre the Decibel reduction would be better no doubt and approaching the 26dbB level with some types of ammunition.

I shot a lot of ammunition through the CMM-4 and it did not come loose or unthread from the muzzle but it did get hot quickly causing a heat haze over the barrel. This was only really a problem when sighting the rifle in and testing ammunition for accuracy; it would not be a problem on a stalking trip.

After 300 rounds or more the moddy still comes apart easily and there has been only a small erosion from flame cutting the aluminium. It is recommended to clean it every 1000 rounds -not a lot on a stalking rifle - and is guaranteed for 2 years or 10000 rounds.

People worry about moderators that come apart in case they alter zero or never go back together the same or just seize up. Well all those points are valid. Aluminium moderators have a tendency to seize up in time, so maintenance is required or just leave it alone – which would be my advice. Decibel reduction is good from such a light aluminium suppressor but it’s not the quietest, but its lack of weight and no zero shift may be a better benefit anyway.

In fact accuracy improved with most of the loads tested as the CMM-4 acted as an effective muzzle weight device, dampening barrel vibrations.

The CMM-4 is a good moderator; it’s lightweight and compact, blending subtle good looks with effective sound moderation, and is sensibly priced at £251.

A-Tec have now bought out a new ‘over barrel’ version of this CMM-4 which I will be testing in the near future.