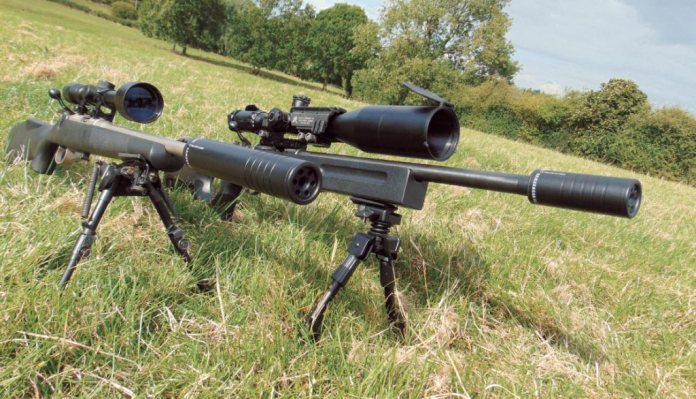 Shhh, lets keep things quiet. Actually, no because these moderators from Calibre Innovations are definitely worth shouting about! I recently had a visit from Alistair Bamford from Calibre Innovations and with him he had a box of goodies to test out on the range. “Goodies?” I hear you say. Only the full range of moderators that he has developed for rimfire and centre fire rifles. Allow me to introduce you to the A.R.M.O.U.R Mark 1 and EOB or ‘End Of Barrel’ sound moderators for all rimfire calibres, be it .22 long rifle (LR), .22 WMR or .17 HMR.

So let’s have a closer look at these then. Firstly, the A.R.M.O.U.R. actually stands for ‘Ancillary Rimfire Mono-core Universal Rifle’, which is pretty cool, if you ask me. Firstly, these mods look just as good as they perform, and with an over barrel version (reflex) or end of barrel (EOB) version to choose from, they will pretty much suit any rifle you have even heavy bull barrels up to .920-inches.

Looking at the over barrel one first, I have been running one of these for a couple of years now on my .22s and it’s had a few thousand rounds through it and with sub-sonic ammo they are very quiet. Weighing in at just 216-grams, they are light weight too. They are constructed from type 2 hard anodised aluminium 6082 and seem very tough! They are available in both ½ UNF and ½ UNEF threads but Calibre Innovations will knock you up a ‘special’ should you need one!

What’s in the box?

Once you get the ‘can’ out of it’s packaging, which by the way is pretty damn cool on it’s own, you find that you have a small strip down tool supplied. With this you can strip down the mod by inserting the lugs on it in to the holes on the end of the mod. You then simply ‘crack’ it open with one turn and then you can just unscrew the core and it will just slide out. All you then have is two component parts, what with the core just being a one piece mono-core design with an expansion chamber incorporated into it. Very neat and very easy to maintain and put back together. Apparently, you can put these in the dishwasher to clean!

Or you can just give the core a clean with an old toothbrush, or use an ultrasonic bath.

Moving on to the EOB, it’s pretty much the same design, but this one screws straight onto the end of your barrel. It strips down the same and has the same mono-core design but without the expansion chamber.

There is a slight difference in noise levels with the EOB but it is negligible. The core design really is effective though, as it allows the gases to flow forward through the moderator. This means that both models offer a similar level of suppression. The MK.1 is slightly quieter (1-2 dB) than the EOB but it is primarily designed for those who prefer the aesthetics of a reflex moderator and is a great choice for hunters.

The DUCIS centre fire range is very ‘Gucci’! Available in EOB and reflex version versions, just like the rimfire one and there’s also one that is specifically designed for the Ruger Precision Rifle! Starting with the EOB, it seems to be a very versatile system, as you can change the thread and calibre for example, but not only that, it is possible to screw on the over barrel section too, so its like having one moderator for all kinds of rifles. Ali explained to me that the EOB is ideal for stalking when you don’t want extra weight to carry in the field, whereas if you are shooting at the range and need a little bit more suppression, you can simply screw on the over barrel bit. The over-barrel one does offer slightly more noise reduction.

When you look closer at the DUCIS mods, you will notice a small dot or dots at the muzzle end. The dot or dots denote the calibre and also can be found on the baffles and the core sleeve, so 1x dot = .22 calibre, 2x dots = .25 calibre and 3x dots = .30 calibre; it’s easy enough to swap bits out for different calibres, just don’t mix them up!

To strip them down, you simply unscrew the barrel mount, the end that screws on the end of the barrel, which by the way can be changed for different barrel threads. Inside the barrel mount there is a high temperature O-ring that keeps the core under compression when shooting, which keeps everything nice and tight and in place. All you do then is tip the mod up and the core components will slide out of the core sleeve. You can then see a work of engineering art! Made from solid titanium that is by the way, 45% lighter than steel and will not rot, the core bits consist of (going from the front) the compressor, four baffles and the core packer.

As the round is fired and the bullet passes through the core packer, the enormous pressure behind the bullet (64,000-psi for a .308) suddenly wants to relax as it enters the expansion chamber. A portion of the gas is then able to travel down the baffle ‘veins’, which are angled to cover more distance than just a straight run. These veins also act as a heat sink to help cool the moderator. The baffles themselves are totally interchangeable and Ali tells me that, over time, as they wear, you can move the first one to the muzzle end, kind of like when you were a kid and you swapped your bike tyres from front to back!

A handy tool is supplied with the DUCIS models so if you over-tighten your moderator or the threads were fouled, you should be able to get it off but keep them clean and take them off when you have finished shooting and you won’t have any problems.

The DUCIS RPR (or Ruger Precision Rifle version) is pretty much the same as the over barrel one but with a longer over barrel section. Ali said that it was a popular request to have a moderator made for the Ruger that would reach all of the way to the hand guard. It was then a no-brainer to produce a specific one for that reason and looking at it fitted, it looks very nice indeed!

So there you have it, the full range of moderators from Calibre Innovations, not only great performers, they are engineering works of art! Having used the rimfire ARMOUR for a good while now, I can personally tell you that they are great performers and work very well. Safe shooting!