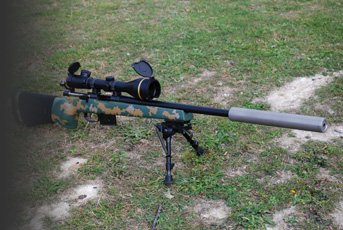 Last month in our Products section I showcased a titanium moderator from a company called Lawrence Precision, and due to the nature of the beast I thought I would look a little deeper into the subject and also the manufacturer.

As material titanium (Ti) is most associated with the aerospace industry and the military. Here its major properties of light weight (40% less than steel), great strength, resistance to corrosion and heat are used in jet engines and even armour applications. It sounds like a magic material and to a degree it is, however all this comes at a cost as it’s hard to machine and very expensive… So why make a moderator out of it, as given your average can is around the £200-250 mark; Lawrence Precision’s Aurora is over 100% more expensive? We shall see!

I was invited to Lawrence Precision (Simon Lawrence) to have a look at the product and his set up, so I could make up my mind on titanium cans. Simon is an expierenced shooter and a talented engineer with an impressive CV. Also there’s some serious equipment packed into his small workshop and that’s what the Aurora is all about; precision.

Simon had this to say: “our tubes are precision cut externally and then internally, using a £1000 boring bar, to give a completely concentric/straight tube, which is made of extremely elastic grade titanium. The baffles are cut from solid titanium of the same grades used in jet engines on military fighter planes. The titanium I use is of US military certification and all parts are cut on calibrated machines known throughout the aerospace industry for there accuracy and repeatability. The end result is a very light weight, durable and accurate sound moderator.”

The Aurora is a reflex (over barrel-type) and slim and long like the PES, as opposed to the shorter and wider BR Tuote T8. No surprises in the build with a forward baffle stack that offers the choice of an eight or ten baffle unit and a synthetic bushing at the rear. What is initially different is the fact that every moddy is hand fitted to the customer’s rifle, so not just a case of waiting for the post to turn up. Instead you go up and see Simon for the final fitting.

A Question of Balance

Simon put an 8-baffle, M2 unit together for my 6.5 Grendel custom based on the CZ527. He offers any thread form you want and can also do a tapered thread, which is self aligning. I opted for ½ x 28” UNEF.

Currently I run an Ase Utra North Star on the Grendel and I have to say I’m very happy with this all-stainless, reflex design… though due to the light and compact nature of the rifle this steel can and does imbalance the package. So my initial requirements were for a noticeable reduction in weight, which the Aurora certainly offers. Frankly any moderator adds weight and bulk, and over the years I as I imagine many others have simply put up with this inconvenience, so something significantly lighter was a revelation!

On a good day my Grendel is capable of ½-3/4” @ 100 yards and that did not change though, unsurprisingly the point of impact was higher with the M2 fitted. Moderation-wise the North Star sounded quieter, however there was not a lot in it and that might well improve as the Aurora gets dirtier inside? Likewise the 10-baffle unit should offer a bit more too, though will be slightly longer. Also interesting was the heat transfer, as titanium gets hot quickly, but by the same token loses it faster too. Cosmetically the M2 comes in a bright finish, but you can have it sand blasted and Simon is looking into coatings too.

For me it’s really all about the weight and the fact the can is near maintenance-free and should last a life time. Handling is transformed and moderation effect is not such an issue, as it works as well as other makes to protect my hearing and reduce the muzzle signature to acceptable levels. Out of interest I let some of my colleagues shoot and listen to the Aurora and they liked the lack of weight, thought moderation sounded different and marginally louder to what they were used to. But all baulked at the price; which did not surprise me.

Get What You Pay For

Truth is there’s no such thing as a free lunch, so you will have to weigh up the Aurora in terms of its cost effectiveness. You could argue that an aluminium can is going to be reasonably light and you would be correct, but it is still very much a lifed product as is carbon steel. Stainless certainly has the edge here but is heavy and still needs maintaining, whereas titanium doesn’t…

It’s a little like scopes – a Swarovski 2-12x50 Z6i is going to cost well over a grand, whereas cheap and middle of the road models will cost £200-500. All work but one will last a life time and give 100% ability and the others will probably need changing every 2-5 years and will never be as good dawn and dusk. So if you think titanium is worth the investment; then this is the can for you; if not look elsewhere! As I always say; it’s your call…

For: Light and effective

Against: Expensive by comparison

Verdict: Not the cheapest, not the quietest, but by far the easiest handling and lightest can we have ever used