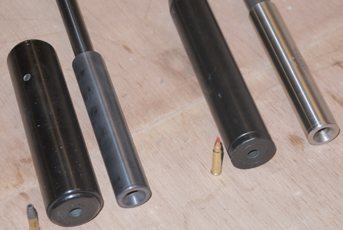 It must have been six years ago that Greg Felton of Law Enforcement International (LEI) announced a new 17 HMR-dedicated rimfire moderator. To be honest when I saw it I did not think it would be any good; as at just 20mm in diameter and 12 cms long it looked more like a barrel weight. To its credit it worked though not as well as the more common HMR cans we used back then, which in the main were .22 rimfire designs, best typified by the SAK, which for price and effectiveness was hard to beat.

Back then I think the LEI was £129, which was a scandalous price to pay, however as we know things have moved on and with a number of calibre-specific and reflex, rimfire designs now available. As have costs! Well the 17HMR design is back and called the Varmint and this time has been joined by an identical 22 rimfire stalemate the Predator. Apart from bore size and a small amount of weight the two are identical, with options on plain or blacked stainless.

Being a fixed design and so small it’s hard to see what’s inside but I can say that the front section (nearest the muzzle) consists of a small expansion chamber with a short coil spring wrapped around the inner wall. I think this is used to adjust the position of the baffle stack unit as it’s a simple and foolproof solution. In front of this is the baffle stack with a convex face baffle with a U-slot in it that goes into the main chamber with what appears to be a series of deep rings that disrupt the gas flow. After this is a concave version of the face baffle that leads into a small space before exiting into a concave end cap.

The engineering is well presented and when fitted either can looks like a muzzle weight. Certainly on my Ruger

M77/17 All-Weather, which has a heavy tube anyway. For testing I used the 77/17 along with my Ruger 77/22, the latter was fitted with a SAK and the former a Sirocco SK11, both proven performers.

Testing was a little unusual as I shot them both inside and outside, the reason was that inside you will get a deal of back blast bouncing off the walls, which would perhaps give a better indication of efficiency. Outside you could better gauge the actual suppression value. Running Winchester sub-sonics in the 77/22 the SAK gave its usual good performance, but much to my surprise the Predator sounded a little flatter and a tad less noisy.

With the 17HMR the Varmint was noticeably louder inside but not unpleasant, again it gave that aforementioned flat tone. Outside however the report seemed if not less than the SK11 certainly shorter/duller. Though all steel they are not massively heavy and do not upset the rifle’s balance and I do like their slim build.