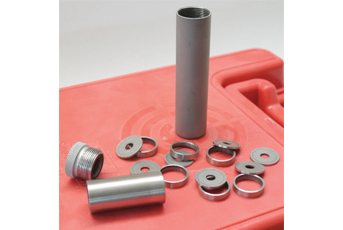 For me as a long term user the world of firearms moderators has changed considerably in the last 20-years. Back then there was not a lot of choice around with perhaps the ubiquitous Parker Hale 22 rimfire can and the Finnish Vaimco for fullbore use. Plus the police were not keen on us owning sound suppression devices, their twisted logic doubtless assuming we would all become budding assassins as soon as wegot one.

Today is a different story with a massive choice of models and makes with some radical materials used too. Plus getting a moddy is a lot easier, as they have become an accepted item to the authorities.

A number of aspects have become apparent in moderators weight, build, cleaning, and the ability to resist thermal erosion and corrosion damage and type. Modern thinking feels that a moddy over 500 grams is getting a bit heavy, which can be solved by using aluminium alloys, Titanium or even carbon fibre. It is also perceived that the old-style muzzle-mounted models are not as good as the more modern reflex (over-barrel) types. Also carbon steel can rust and stainless though more resistant is equally heavy.

I favour lighter weights, but also wonder how long they will realistically last. With this in mind I turn to a rather traditional approach from a reasonably new manufacturer SP Filling Systems with their Onelesscharlie range of fullbore (S-Type) and rimfire moddies.

SP Filling Systems is an engineering company with many years experience in the manufacture of precision components. This is reflected in the moderators they offer too as quality is first class and build of the highest standards. They sent me two models in three calibres. The fullbore S-Type came in 224” and .30” though they are offered in sizes from .17” up to .338”. Also pair of rimfire cans that are identical apart from the muzzle thread, on that point both types can be ordered in just about any thread form you require.

The S-Types are all stainless and muzzle-mounted; the 224” was cut for 14x1mm and the .30” the British favourite ½ x20 UNF. The build is fixed with an expansion chamber at the rear that feeds into a series of cone-shaped baffles; in front of the stack is a secondary chamber that gives a still air interface with the outside world.

I used these on 223 Rem and 308 Win rifles, typically the calibres dictate size and weight to a degree. The .224” can is 16 cms long and 37mm wide, weighing 400 grams; the .30” is 17cms x 43mm and 575 grams. In both cases the build is a pleasing satin stainless and the moderation effect was well up to spec and safe hearing. With these it’s all about weight and length, when compared to alloy reflex or muzzle-mounted designs, however the build quality is very good and the material should guarantee years of trouble free operation.

The rimfire can is .22” bore only though equally at home with 17HMR or 22 Magnum. In some ways it puts me in mind of the old Parker Hale model, though it has an expansion chamber as the S-Type and is very short at 11 cms and 26mm in diameter and weighs 175 grams due no doubt to its all-stainless construction. Unusually it’s strippable and inside are a series of flat washers and spacers at the back is an aluminium thread adaptor. I had two versions cut for ½ x 20 UNF and ½ x 28 UNEF, which allowed me to test using my 17HMR bolt gun and my semi-auto S&W 15-22.

In use compared to an SAK, which is my ‘control’ rimfire can, the SP Filling unit gave about the same moderation effect, though sounded a bit deeper in 22LR. In 17HMR it was a tad noisier but still inside safe limits. Though not as light as other 22 cans it’s small and at 175 grams the weight is negligible on any rimfire rifle. Also the SS construction should give a long and trouble-free life.