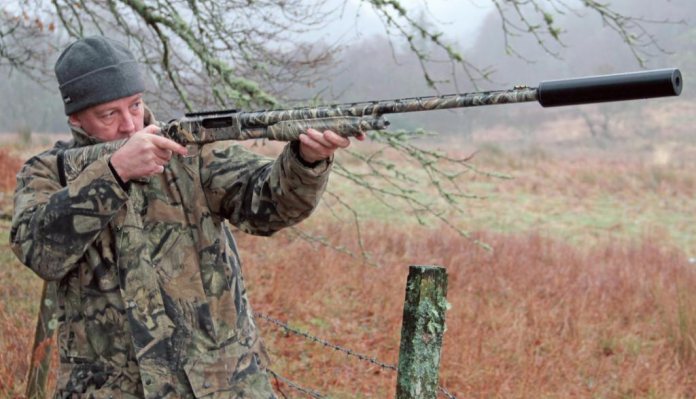 Saddlery and Gunroom (S&G), from Biggin Hill, have been instrumental in the advancement and design of shotgun silencers for as long as I can remember.

They were one of the first to offer a fully-silenced .410 single barrelled break open or bolt action shotgun for pest control; the later evolved into the Hushpower system as an attachment or fully suppressed silencer system. They now offer a really good choice of .410, 20 and 12-gauge pump action guns, as well as the same single barrelled Hushpower and the very sophisticated, fullysilenced 20-gauge double barrelled Hushpower or a detachable/add on sound moderator Hushpower. They will also convert your shotgun for you.

I’m testing the new 12-gauge version of the detachable muzzle mounted Hushpower but will test the .410 variant later.

Wow, what a really useful piece of engineering this is. I have the 10-inch version, although a shorter version is available. This 10-inch model retails for just £160, with an additional £30 for supply and fit of your chosen choke tube to fit your gun. Choke tube, I hear you ask? Correct, this is a system that uses the existing gun’s choke tube as the anchor point within the muzzle of the shotgun and the extended end is permanently attached to the Hushpower.

You need an extended choke tube; but it does not matter what make, so long as it fits your multi choke barrel and the part sticking out of the muzzle is at least an inch in length for fitment to the moderator. The Hushpower is easily attached and reattached, so making the system very handy indeed.

You can therefore choose what dimension of choke that is best for you, ie ¼, ½ or full but be sure that they are steel shot compatible if you use that type of shot. In fact, the Hushpower system is strippable and so the rear section can be bought separately with varying choke sizes that you can swop, at extra cost obviously. With this system, if you have a multi choked barrel, then you can have a Hushpower fitted.

It is two-inches in diameter and 10-inches long; well, 10.35-inches with the rear section fitted and the choke sticks out another 1.75-inch with this Browning Invector, not Invector Plus choke fitted. The Hushpower strips to two parts the main body and the rear cap (with choke) These are made from thick, aircraft grade aluminium with a hardpainted black finish. The rear cap is only one-inch deep and two-inches wide and has an over-bored, 12-gauge orifice through it where the choke is attached and is seated just back from the outer lip.

The forward section is sealed but with the rear cap removed it can be cleaned. They get a build-up of carbon, unburnt powder etc. and I strongly recommend using some thread release agent on the aluminium threads, as these can gall easily, like all alloy mods. The Hushpower, even after 425 rounds came apart okay. There was a buildup of carbon but this was easily knocked out. Also, no stray pellets at all inside!

There are a series of eight concentric baffles, separated by about ½ an inch to form an air space and have a dished profile. The bore diameter through the moderator is 0.748- inch and allows the shot column to pass through but keeps the vast proportion of the propelling gases to be retarded within these baffle chambers. This cools and decelerates the hot gases and reduces the noise when they finally emerge from the muzzle. The muzzle end cap is thick aluminium and also acts as a final baffle and has a 0.748-inch opening.

This system can be used for all 12-gauge ammo, supersonic or subsonic, but obviously subsonic loads are best!

When fitted, it sits almost flush to the muzzle, as a normal choke would, so only extends the barrel by its own length. It weighs 580-grams all in and yes on a 30- or 32-inch system it might feel a little ungainly but for 28-inch barrels or less it was no real problem.

The chokes are fitted centrally into the two-inch tube, so a proportion of the main twoinch build sits above the rib or eyeline. It does obscure the sight but with both eyes open its no problem. People do tend to shoot a little low as they use the top of the protruding Hushpower body as the sight line but its easily compensated for.

I asked Saddlery and Gunroom to fit a Browning Invector type check to this model, as it fits the Mossberg pump action barrel I was using. This choke has a restriction of 0.720 to 0.698, so a full choke size.

I tested the patterns at 30-yards with a variety of subsonic ammunition to see shot patterns and of course best noise reduction. Here are the best three, as a 12-gauge sub article will follow in more detail.

First up, however, were a couple the standard 12-gauge loads, the Gamebore Clear Pigeon and Eley Grand Prix HV just to see the noise reduction. Noise-wise, the Hushpower really took the sting out of these supersonic loads and also reduced felt recoil too.

The noise reduction is such that ear protectors need not be worn if you like and there is no rolling echo around the surrounding fields. At 100-yards down range and in a safe position, the muzzle report is negligible and, combined with any ambient noise, is sufficient to disguise it as a shotgun report.

First were the excellent Hull VLR loads that I have used to good effect in other suppressed shotguns. This uses a 28-gram fibre wadded load in a 65mm case and with No. 7.5 shot size. These are marked low noise and recoil and are very handy for shotgun training grounds to teach new students 12-gauge shotgun. When used in combination with a suppressed shotgun they are spectacularly quiet and my top choice.

They are very well-made and functioned without fault in the Mossberg and the muzzle report was a short hollow ‘throng’ noise, with no follow-on sound ripple, rolling echo and of cause zero supersonic crack.

With subsequent shots, they were even quieter, this is due to the Hushpower filling with burnt gases, so less oxygen to burn and thus less noise.

On the boards, I had a good, even pattern with an upward bias but a really good total hits of 339 pellets, 113 of which clustered in the inner ring and 226 were spread around the periphery. Quiet and good patterns, enough said!

The Eley Hushpower had the heavier load of 32-grams of No. 5 shot in a 67mm case and fibre wadding. Again, the muzzle report was a low-frequency whoosh of air and the pellet column cutting the air. Slightly more noise than the VLRs but hardly at all. The spread was a total of 226 No. 5 pellets in 30-inches, of which the inner 15-inches had 108 pellets and the outer sector a further 118 more. There was a slight upward bias but really good density to the pattern and a tight pattern.

Finally, a light 12-gauge load that doubles as a subsonic round. Lyalvale Expresses Super Light 1040fps velocity cartridge, with a smaller, 65mm case with a load of No. 7.5 shot and a fibre wad. These were very quiet but a little higher frequency to the muzzle report and small degree of ringing from the mod, i.e. frequencies and vibrations have changed. Still a very quiet load and patterned well too. A slight upward bias to the pattern, so no worries about the sighting being a little low, its compensated for. The smaller No. 7.5 shot size literally peppered the board with a total of 355 hits, of which 212 were in the 30-inch ring and the remaining 143 shot were densely packed into 15-inches. A really good dense loading.

With supersonics, the Hushpower took all the muzzle report away but left the supersonic crack obviously and, with the subsonics, it was superbly quiet. Slight upward bias compensated for sighting difference and the multi choke attachment system is the way forward as you can use the Hushpower or not. I am testing more subsonic loads as well as magnum loads and subsonic slugs and buck shot; so, stay tuned, as they say.