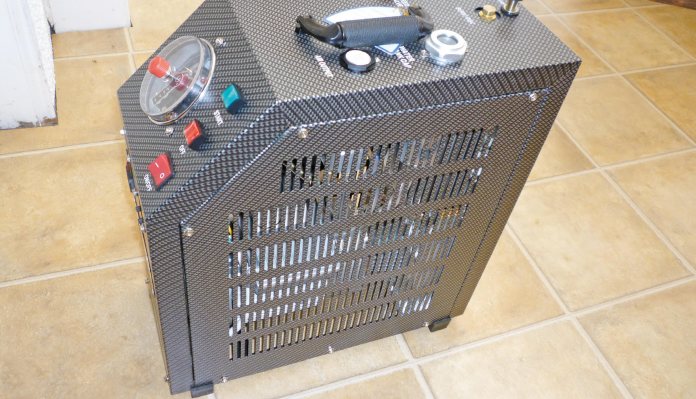 The vast majority of pre-charged pneumatic (PCP) air rifles are filled from a diver’s air cylinder, which offers many refills. But it will also need filling once the pressure drops too low, so a trip to the nearest dive shop to get it charged is required. However, some won’t fill them and there may not even be one in your area. Help is at hand, thanks to Ross Marshall at Gilbert Distribution Ltd.

Ross sent me down one of the Omega Super Chargers they import and what I nice bit of kit it is! It’s a fairly heavy unit at around 30 kilos but it’s manageable thanks to the carry handle. The steel casing is 19” high, 18” front to back and 8” wide; it’s coated in a carbon fibre look finish, which is both attractive and hardwearing. All sides are perforated to allow air to flow around the compressor radiator.

There’s an angled section on the front that houses the large pressure gauge and the ON and OFF switches. The front itself has a power input socket, a meter that measures overall run time and an adjuster for the self drain system. It’s important to know how many hours the unit has run, so that maintenance can be carried out at the right intervals, such as topping up the coolant reservoir and possibly the gearbox. There’s not much needed to keep it running but skipping maintenance would be foolhardy!

The top has the carry handle, threaded air output port that the air hose is screwed to, the glass-topped water reservoir cap and a bleed valve for venting pressure from the system. That’s the overall construction, but there seemed to be a lot of bits and pieces to get your head round. The instruction booklet is very clear though and a read through got me familiar with the procedure.

The initial set-up is a little more involved than when you’d normally use the Super Charger but it’s a one-time operation. The unit has an in-built radiator to keep things cool during charging and small bottles of antifreeze solution and a special additive are supplied, which must be added to the water tank. The tank is then topped up with water and the screw-on cap replaced. A comprehensive spares pack is included too. The unit that was sent had been tested (as are all prior to despatch) and the pressure output set to 300 bar/4500 PSI; it’s adjustable though and should you have a 232 bar bottle, you can alter the output by simply rotating a needle on the pressure gauge.

Air contains moisture, which is not what you want in any air cylinder and it’s important that this does not enter the dive cylinder or rifle being filled from it. To this end, there’s a selfdraining system that vents any moisture from the compressor before it can get into the filling hose. It’s possible to adjust the frequency of the venting via a couple of small knobs on the front of the casing; I set the compressor I was testing to 15 minute intervals.

There’s no need to worry about over-pressuring either the compressor or the bottle being filled, as there’s an auto cut-off system. Also a burst disc is fitted, which is designed to, well, burst in a controlled manner should there be a problem. It’s not going to happen with sensible use but a couple of spare discs are included and there are even tweezers to help replace it if required.

A 32” high-pressure hose is included; one end is attached to the bottle and the other screwed into the air output; the supplied Dowty washer ensures an air-tight seal. The end of the hose that attaches to the cylinder has a female Foster fitting, which obviously connects to a male Foster coupling- this is when I hit a snag! I didn’t have the male part, as these are usually on the end of a PCP’s air reservoir. I called Ross and explained my predicament and he said that as these compressors are used by many different applications and the company couldn’t realistically supply every fitting available. However, a male fitting will be included in future.

A quick call to Best Fittings had the item on my doormat a couple of days later, so many thanks to them for their excellent service. I screwed the coupling onto my 300 bar DIN fitting, that usually has my charging hose attached to it and screwed it into the bottle that needed filling. The air bleed screw on top of the compressor has to be closed, after which the bottle’s main valve is opened. The pressure gauge on the Super Charger then indicates the pressure in the bottle (which in this case was 160 bar) and also the connecting hose. The unit must be switched on a short while before filling commences; this starts the coolant water pump and you can check it’s working OK by looking into the glass-topped water reservoir cap. Pushing the green START button activates the compressor. There’s obviously a bit of noise coming from the working parts but it isn’t too loud!

I made a note of when I started the unit and it took 1 hour 50 minutes to top up the 7 litre bottle to 300 bar. That’s not a bad speed at all and the second bottle went from 220 bar to 300 bar in just over an hour. If I’d started with an empty bottle, it would have taken around 4 hours to fill it.

The Omega Super Charger is a well designed and made unit, it’s easy to use and does exactly what it claims to do. It can charge a PCP, but I think most will be used to re-fill a diver’s cylinder. This unit may seem expensive at £1,399 and it’s clearly Connected up and ready to go not aimed at everyone; however, if you’re nowhere near a dive shop and don’t fancy using a pump, it’s perfect. It’s also just the thing for a shop or airgun club to buy and charge for re-filling bottles.