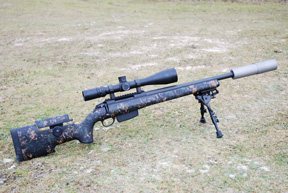 In June 2008 Peter Jackson (Jackson Rifles) sent me a Robertson Composites Silhouette stock for the Tikka T3. He, like me, feels it’s an excellent rifle, though the standard factory furniture leaves a bit to be desired. I would say it’s acceptable on the sporters but any improvement is never a bad thing. However, the furniture on their heavy barrelled T3 Tactical model is very much a modified sporter-style and frankly not in keeping with the gun’s potential…

The Silhouette proved to be an excellent design, though looked a little odd with its high/angled comb. But even un-bedded it transformed the standard, light barrelled T3 action. Pete mentioned at the time that Robertson, at his request, were making a heavier design specifically for the T3 Tactical and now here it is.

The standard Tactical T3 stock is nothing more than the moulded, plastic sporter version with an adjustable cheek piece/comb fitted and a horse shoe extension bolted to the slim forend. This as I discovered in a gun test in June 2007 is not bad, but does not allow the gun to show its full potential. For example; the butt is a bit basic and the strengthened forend is not rigid enough for multi-positional use as there’s a 1 ½” point of impact shift ON/OFF a bipod.

The Robertson design unsurprisingly is not unlike the McMillan A5 or in this case the new A3-5, which dispense with their familiar wrap-over cheek piece and goes for a full-width height-adjustable comb section instead. Similarities also extend to the grasping hook under the butt and the forend and the large and sharply angled pistol grip.

The action is the standard T3 Tactical with its heavy, 20” barrel threaded 18x1mm for the massive muzzle brake that Tikka fit to this model. The rifle has been bedded with a free-float on the barrel and a Jackson Rifles trigger fitted. This was done to assess the stock’s capabilities, as this recipe is going to get the best out of the gun no doubt.
Robertson hand builds all their stocks and uses specially formulated epoxies to give the best structural characteristics combined with a variety of reinforcing materials. All units are post cured at high temperatures so maintain their properties in real time use. The action void is filled with a solid composition to give a stable base for bedding. The forend uses a lightweight (non foam) fill which provides rigidity without adding non-structural weight. Butts are solid filled in target/tactical styles to allow the installation of cheek piece adjusters.

All models use carbon fibre in critical areas to add stiffness without weight penalties; inlet and void areas use glass, Kevlar, carbon fibre etc. Stability is achieved with materials that are dense enough to resist compressive and shock loads, and are dimensionally stable to changes in temperature and humidity.

Colouration uses a pigmented gel coat layer which is part of the stock, so very tough and the choices are good. The Tactical came in black with what I can only describe as an ersatz tan/green camo pattern. Not pretty but there is a lot of choice in this area.

The layout shows a wide, beaver tail type forend with a neutral pistol grip; course texturing is applied in both these areas to give a secure hold. The comb when fully down sits quite high at ½” under the bore line with a vertical adjustment of 1 ½”. The front of this section is cut away so that the tail of the open bolt does not get fouled by it when it’s set high. On the T3, which has a long shroud and cocked action indicator the practical working height is reduced to a maximum of 1” as if it’s set higher it will bang on the front of the comb.
The adjustable comb is a simple design with a large hand wheel that clamps the vertical plate; there are no springs to push it up either. Given the neutral build of the pistol grip Robertson has built in the ability to reverse the wheel to suit a left hander. This job takes seconds to accomplish.

A Tad Basic in Places

Length of pull (LOP) at 14 1/8” suited my long arms very well. The thick rubber recoil pad is backed up by a plastic spacer and I would assume that it’s possible to reduce or increase this measurement by removing or fitting spacers. However given the fixed length of the butt the former course will only shorten it by 5mm. QD sling studs are fitted fore and aft, but unusually there’s only one at the front, usually on furniture of this nature - a second stud is set behind the first to allow a closer bipod mount with potentially more stability available.

In use the Tactical is good and solid and the adjustable comb allows you to fine tune your head/scope and stock weld positions. The pistol grip is big and reasonably comfortable, though the base of my thumb was being forced out a tad and I would want a bit of scalloping there to give a more natural position for my firing hand.

Unsurrpisngly accuracy was superb with the T3 cutting real, ragged ½” one-hole groups at 100 yards using Hornady 168-grain TAP FPD ammo. There’s little doubt that Robertson Composites make a well built stock that offers a rock solid platform for high accuracy potential. However from my view it is perhaps a bit basic in some areas. The lack of a second QD stud up front and the scalloping on the side of the grip do seem to be omissions. Likewise the overly long LOP, it would have been better with a shorter butt and a set of spacers to suit all sizes.

Nevertheless, I would be the first to admit it’s a vast improvement over the factory design and if I owned a T3 Tactical I would not hesitate getting the Robertson stock as it makes for a far more shootable package, even un-bedded. Looking around various web sites shows the rifle at about £1,100 and it is a shooting machine no doubt…

We Reckon:
• Good alternative to the original
• Excellent build
• A bit basic in places