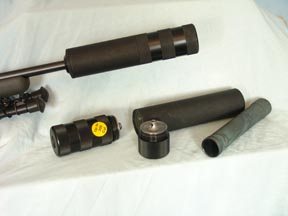 It was a good few months ago that Andrew Banner (UK Custom Shop/Wildcat Moderators) sent me his new design Predator 8 moderator, which is a reflex or over-barrel system, as is the fashion these days. The idea behind this product was three-fold;  it offered a full bore can that was easy to disassemble and so keep clean, which means a longer working life and was priced to go head to head with the BR Tuote Reflex at around the £200 mark. It was also the first moddy to my knowledge that was made from the outset to be truly modular, in that by swapping baffles and expansion chambers for others of different sizes/capacities you could set it up for just about any calibre or need.

At this year’s Tackle & Gun show I visited the Wildcat stand and Andrew told me that the alternative baffle and expansion chamber units were now in production, so he would send me some to use with my Predator 8.

If you are not aware of the Predator 8 system then here’s a brief recap. The moddy consists of three main assemblies; up front is the baffle stack which shows an inner, multi-hole cage that slides into the outer/baffle unit, at the rear is a stainless steel blast plate. This screws into the middle adaptor unit which is the part that attaches to the rifle’s muzzle and is available in all common thread sizes. This piece is pierced by holes, which allows the gases to bleed into the expansion chamber at the rear. The chamber consists of outer and inner tubes and at the rear is an end cap with nylon bushing that can be drilled out to suit the barrel’s outside diameter. All interfaces are sealed by O-rings. Overall a sound and practical design that from my tests gave effective moderation of centrefire calibres. Disassembly too was easy, so the ability to keep it clean, should you choose to do so, again lived up to the claims and ability of the unit.

All Wildcat has done now is to produce three sizes of baffle stack – 4, 8 and 12 and various lengths of expansion chamber and inner tube lengths, so you can mix and match according to calibre. They sent me 4.5, 7.5, 10 and 11.75” tubes, the last two seem quite long but when you consider that this is what sits over the barrel in front of the forend and behind the muzzle, then only shorter tubes need to get the shortest units. For example I used my Mauser M 03 in its 223 Rem set, which only has a 20” tube, which with its long forend only leaves 7.5” of barrel available. So I had to fit the 4.5” chamber, however for this calibre and the right baffle stack it was effective.

To my eyes the little 4-baffle unit did look rather small and though not overly powerful the 223 Remington cartridge produces quite a high muzzle signature so a good test bed. Shooting was done with my 60-grain reload that achieves around 2870 fps, and a Norma Varmint load pushing a 50-grain V-MAX at 3300 fps.

In terms of size, weight and handling the short expansion chamber and tiny 4-baffle unit offered a very compact moddy indeed, which measured nose to tail 7.5”.  Including the middle section (adaptor tube) it only adds 2.75” to the overall length of the rifle. In terms of effect it was workable and took the noise down to an acceptable level, though the signature was noticeably sharp.

Moving up to the 8-baffle stack edged up the overall unit length to 8.75” with an added 4” past the muzzle. Though still offering good handling the weight difference was easily noticeable over the smaller unit. Signature was reduced too, though not as much as I thought it would.

Finally I fitted the largest, 12-baffle unit. This put the overall length up to 10” with a 5” overhang on the barrel. Here the extra weight was most noticeable, as was the sound reduction. I would say in this format in 223 it was the equal to a BR Tuote T8, giving that magical, flat ‘bewap’ noise of a moddy working properly.

Obviously the larger amount of baffles means the greatest amount of moderation; no surprise there then? However, the M 03 in 223 is a very handy rifle with its 20” barrel and overall length of 40”. I did find the 12-baffle nose piece made it a bit ungainly and re-shot all three moddies to see what else might be occurring. This time I shot for group and found that the 8-baffle stack gave the best performance for my load and barrel length; keeping it at ½” @ 100 yards with its 60-grain Hornady SP over 26-grains of Vit N140. So I had no compromise on accuracy but a slight one on output.

I think what I liked the most about the Predator 8 is the ability to assemble a recipe that suits one particular gun perfectly. Had the barrel on the M 03 been longer it would have been interesting to see how much difference the larger expansion chambers would have made in conjunction with mixing and matching baffles.

Overall a most flexible system and one that will save you a deal of money when it comes to getting a moddy for a rifle, as with a basic Predator 8 you can up or down size accordingly without having to buy a whole new can…