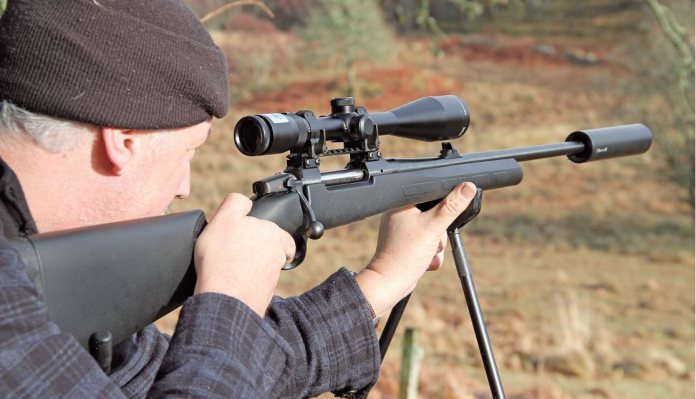 I always go shooting with a set of sticks; a good stick not only provides additional support to steady your aim but it also steadies you when traversing tricky ground. Most sticks these days are not really sticks; they now offer an adjustable, steady, lightweight and height adjustable support.

A new series of sticks is being imported from France by York Guns and are called the 4 Stable Stick. I had three models to test, the Mountain Stick, Bush Stick and Monteria Stick. Each being purposed for differing shooting scenarios and with twin or four legged arrangements. All legs are made from aluminium and supporting parts and adjusters are reinforced with a nylon fibreglass.

The Monteria is a more typical two legged stick but the pivot point is set at the feet, so the top supports splay apart to cradle the forend and the butt of the rifle, so that you can rock the rifle into the aim on a single foot but is supported across the whole weight of the rifle. This model uses 7075 T6 aluminium legs; two of them are joined via a swivel attachment at the base where the foot spike protrudes. Therefore, when not in use they lay flat together and when open form a V shape of about 35-degrees. The legs are adjustable for height from 75cm to 165cm, so excellent for sitting for rabbits or foxes, or standing for deer or boar.

The legs have three sections that slide within each other and are locked and released by a nylon clamping system, there are two of them, so you can adjust the height to any setting. There are tightening adjusters to fine-tune the tightness, so they never wear loose. The actual support at the top of each leg is a simple U or V shape, again made of nylon-reinforced fibreglass and tipped with a soft rubber cover to each spur. Distance between the tops is 4cm or 1.75-inches, which is a bit slim for varmint profiled rifle stocks.

They are light at only 360g, so are easily carried and are very quick to deploy for a surprisingly steady rest.

The Bush Stick is designed for a one height operation, such as stalking for deer or taking shots at plains game. It weighs 820g and is made this time of 6060 T6 aluminium and comes in four sections; when separated, the storage height is 90cm. The bottom halves have a similar pivoting foot as the Monteria model but with an aluminium foot. They are joined together by a tent pole style pop in linkage.

The top halves have the supporting arms and this time the rear section has a rubber covered twin spur nylon arms that change their width dependent on how far you splay the legs. The front rest is a broad flat cup of 90cm or 3.5-inches width with side bars and a rubber pad to stop slippage of the forend of the rifle.

The sticks can be laid flat together (if used as a monopod) or stood upright in front of you with the legs open left and right for the correct height. The two legs are pushed apart front and back to form a cradle that the rifle can rest on and be adjusted for aim by tilting the body and sticks forward or backward- very neat!

Finally, the Mountain Stick is the top of the range model, is height adjustable and is essentially the ‘Bush Stick’ but with central extensions making for three leg extensions per support.

These are made from 7075T6 aluminium, so the whole stick weighs 550 grams, compared to the Bush Stick’s 820g. The height is adjustable from 130- to 185cm and when taken down for transport i.e., airplane friendly, the overall length is only 65cm. You therefore have the best of both worlds, a four legged stick for stability but with the option of sitting or standing shooting. The bottom section is the same as the ‘Bush Stick’ as it pivots but the bottom and top leg sections have five additional holes per leg, for height adjustment.

In conclusion, the Monteria is a useful and lightweight stick that is quickly deployed. The clamping system is good for instant height adjustment and the whole design should last well. The tops though need to be a bit wider in my view and the price is good for this type of stick. The Bush Stick is not height adjustable but that’s fine for most uses and the broader forend support is much better, but the higher you splay the legs, the more the rear sections spurs close up; so if you are tall the gap might be too small for some gun stocks. And the Mountain Stick offers the best of both worlds for support and height adjustment, but at a price. However, the splayed four stick design with the two-point contact with the ground has been a winner now for some time. It offers a very good steady support for a well-aimed and confident shot.

I tried the sticks with all sorts of rifles and calibres and found them very stable and fit for purpose.