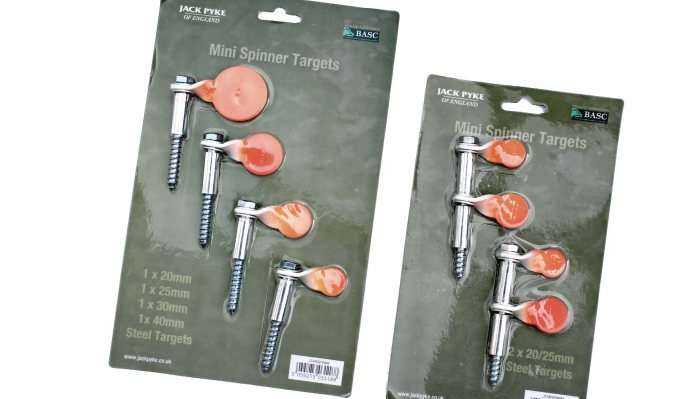 It seems no matter where you look there is a target for the airgunner, be it knockdown or something as simple as a spinner or other such reactive target. Yes, long gone are the days of the tin can as there are a host of more challenging and far more interesting targets such as these little gems from Jack Pyke of England.

There are two different Mini screw-in Spinner Target packs available; one containing two double spinner targets, with 20 and 25mm disc-shaped heads set on the same securing fixture. The other pack contains four separate single spinner targets each holding either a 20, 25, 30 or 40mm diameter kill-zone spinner disc. The securing fixture consists of a very heavy-duty galvanised steel threaded bolt. The kill-zone spinner disc or discs are slipped onto the bolt and both separated and held away from each other by lengths of hollow tubular steel. The targets are designed to be screwed sideways into a wooden post (obviously with a strong backstop behind), thus allowing the spinner heads to hang down and move freely upon being hit.