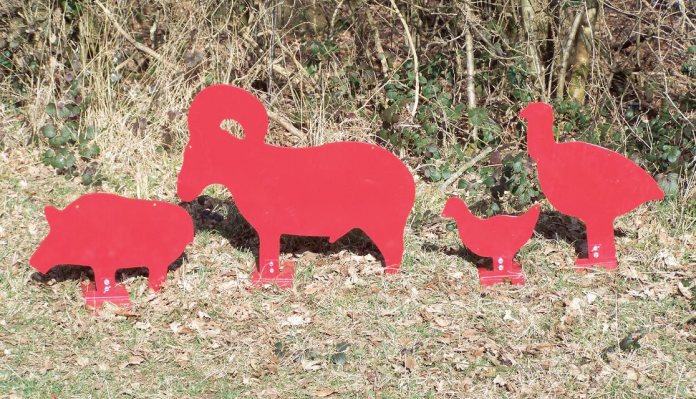 Having first shot steel at Orion Firearms Training in Wales, I discovered just how useful this type of target can be as a training tool. Described as a reactivetype, they offer immediate feedback for each shot; this is particularly useful when trying to learn your fall of shot at distance and compensating for wind. I have been hooked ever since and it was about time I had a look at some of the steel targets available today.

On test we have a steel turkey from the NRA HARDOX 500 series, made by Target-Air (target-air.co.uk). Also on offer are chicken, pig and ram silhouettes (sizes and dimensions below). These could be seen as a strange selection from our viewpoint, but in the USA, steel silhouette shooting is popular. However, I would like to think the manufacturers might make a fox or at least a coyote shape, as that would suit us well!

Targets are painted red and made of 10mm thick (3/8- inch) HARDOX 500, which is abrasion-resistant steel, with a nominal hardness of 500 HBW. In English, this means they are going to withstand bullet impacts from even the largest hunting calibres. It is worth considering the weight though, as the turkey is not light, at just shy of 10kg. The ram is nearly 22kg, but they need to be to take the pounding!

Included with the target is a stand, which attaches to the base using wing nuts for quick assembly. Alternatively, they come pre-drilled with holes and a pair of D-shackles. These are provided to allow the attachment of chains (not included) so you can hang them, so that they swing freely when hit. Meaning you will get both physical and audible indication of a hit.

If you are using the stand provided, then it is a good idea to make sure that the face of the target is angled forwards by say 20°. This makes sure that the majority of the bullet fragments are directed downwards into the ground. Be aware the immediate area gets seriously damaged by the bullet fragments! My preference would be to mount it on a frame using chains, as this allows it to absorb the impact and to direct the fragments downwards as it swings back.

Having placed the target around 115-metres away, I fancied having a few shots at it with my Smith and Wesson 15-22. There was an easily audible ‘ding’, which immediately became very addictive as you can probably tell from the picture! After a quick inspection it was clear that the little .22LR rounds had just rubbed the paint off, which is what I expected. Up next was the .223 (also at 115m) and with a noticeably louder ‘ding’, all this did was scratch slightly more paint off! With prices starting from £39.99 for the chicken, these targets offer a very affordable and fun training tool.