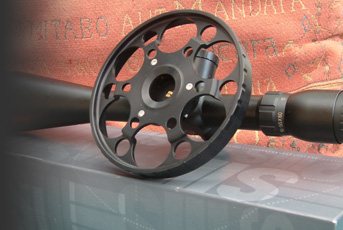 Over the last few years Sightron has built up a pretty impressive following amongst long range full bore rifle shooters with their S111 series scopes. Made in Japan the quality is excellent and the only thing that has prevented more of them appearing on the FT circuit has been the inability to focus down to less than 50yds. That has all changed in recent times by the inclusion of an FT model with a 10yds to infinity specification and the addition of a large side focus wheel for range finding, so I’m here to see what it’s all about.

My first impression is one of a quality product! Finished in matt black, it has capped target turrets and a neat, bulk free look about it. Unlike the 8x32x56 model reviewed in this magazine recently, the 30mm tube appears to be a two piece unit joined where the huge objective end starts to expand to its full 60mm.

The zoom ring is chunky with a nice feel without being overly stiff to operate, but I found the marker that denotes the power setting a bit hard to spot. Unscrewing the caps reveals the turrets which are nicely marked off in gold numbers and precise 1/8th click adjustments. Marked at 10 MOA per revolution, they feel ‘safe-like’ in operation and incorporate Sightron’s own ExacTrack system. At the rear is a fast focus eyepiece.

This design is unique to Sightron and differs from the other systems by exerting a constant pressure on the adjustment mechanism regardless of what position the turrets are in and alleviates the problem of having to have the scope optically centred for precise MOA adjustments. It also ensures a return to its zeroed position without shift problems. All good stuff when FT demands so much trajectory adjustment between each shot.

All this is finished off by the addition of a rather grand focus wheel nearly 6” in diameter. Nicely made, it’s a little too big for my taste but many FT shooters prefer them large! I understand that a smaller 4” version will be available as an option. It has to be said that it is extremely smooth in operation all the way through its focus range.

The reticule is available in a 1/8th target dot or modified Mil-Dot versions. The latter is the one that I think most FT shooters will want, as the former can be easily lost in some situations and there are no reference points to use for windage allowances.

In common with the majority of US scopes the reticule is in the 2nd focal plane. Visually this means that what you see (target and reticule) stays in relation to each other. Unlike 1st focal; whereas you dial the mag the reticule gets larger as the field of view contracts. Both systems have their pros and cons, but the bottom line is with a 2nd focal system the manufacturer will nominate a single power setting that the reticule subtensions will be at full value. This is normally at full magnification.

Once fitted to my spare RN10 rifle, the scope felt surprisingly manageable compared to its competitors, despite the large side-wheel. There is plenty of room on the tube each side of the centre bell for fore and aft adjustment when setting up the eye relief which is around three inches.

Looking through for the first time shows this to be critical when setting up. It’s either in or out when looking for that perfect circular picture. It becomes obvious why so many long range full bore shooters are changing to this scope when the superb edge to edge clarity, combined with the brightness, is viewed for the first time. The reports of rifle shooters sighting bullet holes at 600yds starts to make sense!

The FT model can be used at x50 mag when range-finding in most situations which is something that can be tricky with a lot of high mag scopes. Some targets can appear too dark giving the shooter no option but to reduce magnification. This can alter range calibrations on the side-wheel.

With 1/8th clicks and a full 10 MOA per revolution available, FT shooters should never need to get past number 6 on the turret from zero. I tried my best to lose zero on both windage and trajectory turrets but failed as every time it returned precisely to its position. As one would expect, the windage and trajectory adjustments remained completely independent with no adverse interaction even at extreme ends of the adjustments.

Focusing was smooth and precise with the target picture snapping in and out quickly even at ridiculous ranges of 150 yds plus and there was no noticeable change in focus shift due to temperature changes.

In the World of Super optics suitable for FT use, there is no such thing as a cheap scope and the Sightron prices itself right in the middle as far as cost goes. As far as performance goes, well it works as well, and in some areas, better than makes costing far more. An optional sunshade is available along with your choice of reticules.

At the moment AIM Fieldsports have the scope on offer including the side-wheel for under £900. If you are looking for a real quality piece of kit to do justice to that new FT rifle you need look no further.