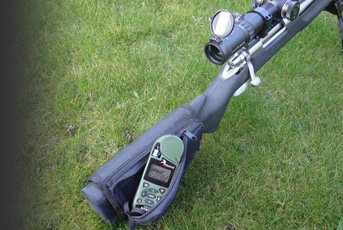 We are now getting used to small, hand-held electronic devices, notably Palm computers and iPhones etc. that can compute and display all the ballistic data we need to know about our chosen cartridge. Up until now, other than some hefty military gear, nobody has combined the two. Kestrel well known for the hand-held weather meters (anemometers) have teamed up with Horus, a U.S. ballistics company to give us the Kestrel 4500NV Horus combined ballistics and environmental hand-held computer! This is the kind of item that needs serious testing to fully comprehend what it will, and will not do. An article such as this can barely skim the surface of the features of such an inspired design!

The unit is the size of a mobile phone and comes with a soft case and minimalist handbook. The buttons are easy to use with a positive feel; a backlight is also featured for use in the dark, which has an automatic turn off after a minute. The impeller fan for wind speed measurement is sent wild by even the tiniest of air currents and is easily replaced if damaged. The temperature and humidity sensors are located in a guarded loop to the left of the device and although fairly well enclosed, I was very careful with storage.

What the device allows you to do is enter all your cartridge’s ballistic variables and velocity along with rifle’s data - bore-sightline height, twist rate and direction along with zero range etc. This will, in a compact, weather resistant instrument, output all the required elevation and windage data you need for a long range shot. Nine rifles can be saved in this area with their own specific features, the sight click adjustment can also be specified, whether it be in MOA or Miliradians. This is the Horus side of the software and this is the point at which things become a little more complicated but amazingly clever.

GPS (latitude only) and a digital compass are incorporated, along with altitude, atmospheric pressure, temperature, humidity and wind speed sensors. As well as being able to access these independently, the software will compute all these variables into a single constant, second by second update to your firing solution.

Now, before we dig deeper here, let’s not forget, any wind speed meter, no matter how clever, can only tell you the wind conditions where it actually is. Your bullet might be travelling hundreds of yards to its intended target and during that flight time, the wind deflection it will experience will commonly vary, in strength and direction. Make no mistake, at longer ranges even the smallest of breezes will move any bullet, no matter what speed or B.C. it has. All variables cause problems and shooting in the wind is about a lot more than just numbers.

An optional docking cradle is available to connect the Kestrel up to your home PC with Horus software. Alternatively, the unit itself is available with a Bluetooth so it can be done wirelessly.

Once your ballistic data is entered, you then move onto a Target screen into which you program the direction of fire (DOF). This is done by pointing the unit at your target from your firing position and pressing `Capture` to log it. This sets the compass bearing of your direction to correlate later with the wind direction. The distance to and angle of the target above or below horizontal must be entered manually. Strange; as the unit has so many sensors, I would have thought an inclinometer would have been included as it is on iPhone. Of course, a cosine indicator on a riflescope can also be used for an accurate reading if one is fitted. If you are playing with this kind of gear, you are certainly more than likely to have access to a laser range finder, as the distance to target is critical.

The next step is wind direction. This is the one area where human error can certainly come into play and nature of course likes to mix it up. The unit is pointed into the prevailing wind, direction chosen by you and `Capture` pressed to set the compass bearing. Two of the optional accessories available for the unit should almost be considered as a must-have for serious users to get this step spot on (a miniature tripod mount with the rotating base and wind vane). When the Kestrel is mounted on this, it will automatically rotate into the prevailing wind although at some point, the unit must be held firm for the Capture button to be pressed. I’m hoping to test this soon.

Now we enter the wind speeds. This again, can be done manually, entering a high and low value as you might with a normal anemometer or automatically using the software.

Now the magic starts. If you run the unit on full automatic settings, the Horus software will immediately calculate your windage and elevation setting for this specific shot scenario, constantly updating your firing solution as long as the unit remains facing into the wind. This is where I find my only real criticism; as, if the wind is from 5 O’clock, how do you follow the readings when you can’t look directly at it whilst controlling a gun? This leads me to the conclusion that this is aimed more at the two man team. To be fair, I’m sure design features could have been incorporated to iron out these discrepancies but at what price? This is already what I would term an expensive, luxury item.

However, while you are concentrating on your shot/target, the Horus software is quietly monitoring virtually every other variable that affects the firing solution. Some may remain near constant such as Coriolis and spin drift corrections although these are mainly based on your geographical location and range to target. But for a ‘professional user’, the wait for the shot may remain for hours or even days, at which point, air temperature, pressure and humidity may alter vastly, with a corresponding effect on what may be a long shot at a target that appears only briefly. All these calculations can be simultaneously running on two separate targets by the way.

I tested the Kestrel on several occasions but its most impressive day was in a light, 3-8mph, 2 o’clock wind when shooting static clay pigeons at 500 yards. A 90mm diameter represented a challenge without any wind! The Horus software gave me a constant readout of the required sight corrections, which were easy to dial in on a target scope, perhaps not so easy on a hunter though, but that is another matter.

For the casual user, who wants to enter ballistics, range, and a couple of wind speeds and achieve a good firing solution for that first shot, the unit is an ideal pocket companion, along with a range finder. To get 100% from it however, serious study/practice is required, so it will be of less use where the a quick shot is required such as hunting or a more action-orientated scenario.

The serious target shooter can certainly use some of its features to learn more about how the variables affect a shot. But in competition, wind reading must be learned for every yard of the bullets flight, using visible indicators like flags etc. I would have loved to see a 360° facility, be it in the display or the impeller itself, allowing a single user full functionality. But a good balance has been struck between what could have been achieved and what is offered at the price. I chose to use it with the wind readings, high and low entered manually and it still gave very good first round hits on 600 and 800 yard sighting targets.

Too many shooters seem to have misconceptions about the major effects of distance and wind to a bullet in flight. A tool like this can only help to increase knowledge about these factors, along with some of those that have smaller effects; to the serious long range shooter this is very important!  Any shooter should remember, especially in the pursuit of live quarry, no amount of technology will hit the target for you and tools like this will teach you when to take your finger off the trigger as well as help learn when to continue.

For: A sophisticated piece of equipment that will add a dimension to longer range shooting

Against: Expensive and it needs a more comprehensive instruction manual

Verdict: If you are serious about longer range shooting; worth a look