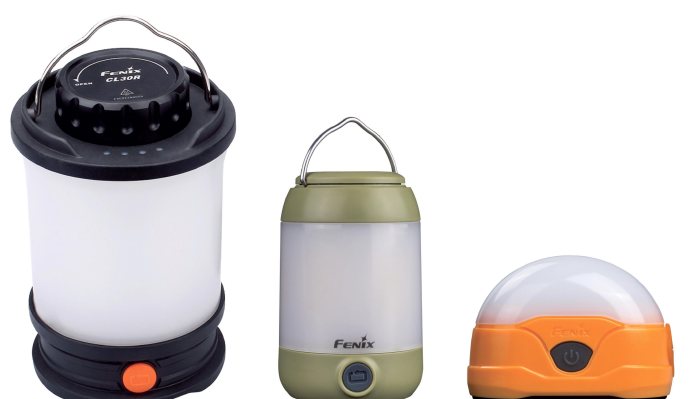 The Fenix CL30R measures 136mm high x 93mm in diameter, weighs 412-grams excluding batteries and is waterproof to IPX-7. It offers 5-brightness levels from its LED’s and the lantern is charged via a micro USB cable (supplied) or from any compatible source like a mobile phone charger. It can also be used as a power bank to charge other USB devices from its 7800mAh internal capacity. However, output is limited to 1.35 Amps so it will not charge the latest high capacity phones with fast charge feature. Fenix’s 2600mAh 18650 batteries (supplied) can be replaced with 3500mAh batteries for a greater run time of 6-hours at 650 Lumens. The unit features a last mode memory, a cold-resistant battery compartment and it floats. It has built-in charging and battery level indicators plus a tripod mount and hanging loop.

Next up measuring 85mm high x 55mm diameter and weighing 140-grams excluding batteries is the CL23. Built to IP66 weatherproofing standards it uses white and red LED’s to give multiple lighting options and impressive run times on alkaline or rechargeable AA batteries. It produces 300 Lumens, covering 360° to a distance of 20m, but also provides forward only illumination of 25 Lumens and downward only lighting of 2 or 25 Lumens. From one set of batteries and hung from a suitable position, the CL23 gives impressive downward lighting run times of 3.3-days at 25 Lumens and 14.5-days at 2 Lumens. It can also operate on 1, 2 or 3x AA batteries, has a white light memory mode, red LED light, plus red flashing modes. It has single switch operation, a hanging loop, keychain attachment, tripod socket and a 5-year Fenix warranty.

Lanterns are more often associated with camping but when they’re as versatile and cleverly designed as the Fenix LED versions, they crossover ideally for hunting use. Whether that be packing up kit after an evening session or processing a bunch of bunnies after a successful hunt.