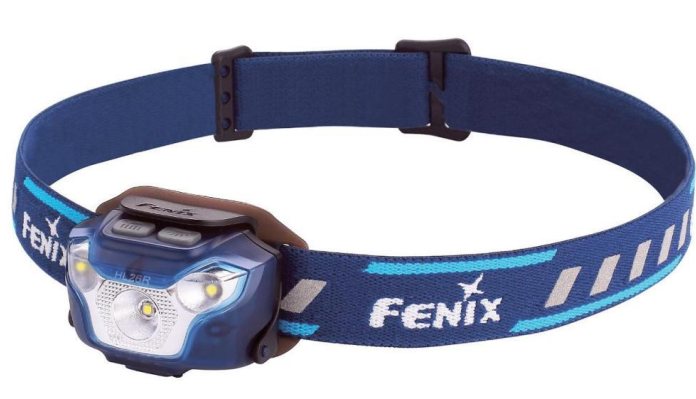 Even on summer evenings, shoot into dusk and you’ll soon find darkness descends far more quickly than expected; therefore, a headlamp is essential for paunching rabbits and/or making your way off your shoot safely. That nicely leads me in to say: check out this trio of very high-quality ‘lamps’ that’d suit any ‘night’ hunting situation.

First up, is the Fenix HL26R, which measures 65mm x 44mm x 37mm, weighs 86-grams and built to IP-66 weatherproofing standards. The ‘60-degree tilt’ aircraft grade aluminum casing holds a Cree XP-G2 R5 LED and Nichea White LEDs. The former offering 3x Spotlight, the latter 2x Flood modes – which incidentally have separate switches for operation but can’t be ‘run’ simultaneously. There’s also an SOS ‘flashing’ emergency mode, including low battery indicator and an internal aluminum heat dissipater. A ‘last mode memory’ for each beam setting is also an in-built feature. The powerful 450-Lumen ‘burst mode’ on main beam operates for one minute after activation, giving excellent punch to reach out to 100m when required. Powered by an integrally housed Li-poly battery, it charges via the USB to Micro USB charging cable supplied.

Next up, is the ‘unique’ HM50R; I use that term because it’s not ‘just’ a headlamp, due to you being able to remove the front light & battery casing from its silicone holder for use as a ‘standalone’ mini torch. Manufactured from aircraft grade aluminium, with a premium Type III hard anodised, antiabrasive finish it measures 67.5mm x 33mm x 28mm, weighs 63-gram (excluding battery) and conforms to IP-68 weatherproofing standards. The Cree XM-L2 U2 LED is powered by a single 16340 rechargeable lithium battery (supplied) and is charged via the USB to micro USB cable that also included. It can also be powered by a CR123A nonrechargeable lithium battery.

The single side switch controls four brightness levels up to a max output of 500-Lumens, which gives a beam distance of 80m. Outputs levels are tuned to offer the maximum run time, so the higher brightness levels will automatically reduce to a lower level to achieve this.

A last mode memory setting is an in-built feature plus battery level indicator.