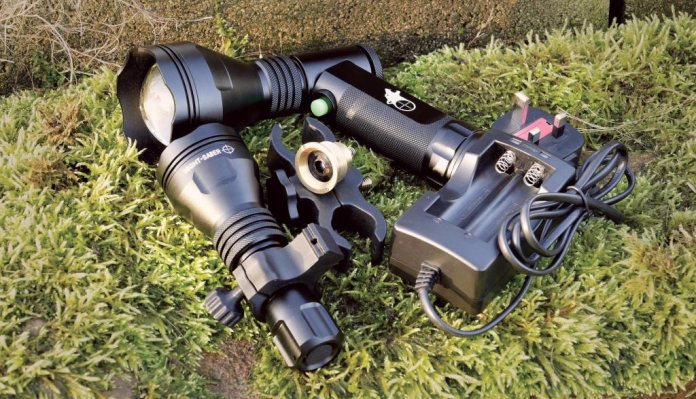 If you read a lot of shooting articles, mine included, you could be under the impression that NV or thermal is the only way to go after dark. In reality that’s simply not the case.

As long as you don’t over shoot your permissions (one visit every two weeks) quality hunting torches may well be all you’ll ever need. I know several serious foxers that used expensive NV and thermal scopes but returned to quality day optics and torches; often alongside a thermal spotter admittedly but if you’ve got a lot of ground to cover, lamping can be just as effective as cutting-edge tech.

The problem with traditional pistol grip incandescent lamping torches is their massive size and in some cases the weight of the external batteries needed to power them. At night, less is more. I’ve got my sticks in one hand, my rifle in the other; where the hell am I going to put a lamp with the head the size of a dinner plate?

Well, here’s the solution, the Alpha from Night-Saber. Excellent in terms of design and features, great beam clarity, fantastic range, built like a tank and perhaps best of all, it fits in a pocket! The ‘Solo Hunter Kit’ ships with the Alpha pistol grip 67mm lamping torch, plus an on-gun 50mm, A clamp to mount it, a two-port intelligent charger, plus the LEDs/pills of your choice.

The build quality and materials of both torches is reassuringly solid. There’s no plastic in sight, apart from the OFF/ON buttons. Everything is made of quality aluminium. They look and feel tough – real ‘last a lifetime’ stuff. Having said that, they don’t feel agricultural and there’s clearly been a lot of time spent on the design. An example being the focus adjustment (identical on both torches.) With a couple of turns you go from wide open flood to one of the sharpest pencil beams I’ve seen on any torch, particularly in the case of the handheld unit. The adjustments are made via a knurled collar that’s stiff enough to maintain position but soft enough to adjust easily.

The Alpha itself takes two 18560 batteries in the pistol grip, while the on-gun torch takes a single. Both units offer 1 to 3 levels of illumination (depending on the pill) with the familiar half-press on the trigger or rear button to change the level. The power setting being locked by simply powering OFF and ON.

Aside from the size, build quality and ergonomics, a real standout feature of both torches is the beam quality. One of the most irritating features of most LED hunting torches is the cross-hatching or patterns in the beam, which tend to be particularly prevalent when tightly focused. Although there is very slight banding when adjusted to flood, it’s unnoticeable in the field. I generally only use the widest flood when picking up anyway. Unlike most torches, the tighter the beam, the clearer and more uniform it becomes.

Regardless of whether you’re wide open or tightly focused, the clarity and smoothness is superb. As you can hopefully see from the photos, the latest generation LEDs produce a very consistent, pattern free beam that’s as good, if not better than, anything else on the market.

In terms of range, Night Saber are claiming 400-600-metres and I’d say that’s fair, with the red LEDs making the 400 while the various flavours or white stretching out to the 600-metre mark. The box claims ‘up to’ 10-hours’ run-time; to be honest, at full power, you can probably expect half that but that’s still as good, if not better than, the competition.

As I mentioned earlier, ‘less is more’ when it comes to night shooting. My essentials are the rifle, sticks and a spotter. It’s very rare anything gets added to the list, but I’ve made an exception for the Alpha. There’s plenty of kit options on offer, including the bare Alpha 67mm for just £69.95; it’s a must have for any serious night shooter.

The torches use the latest generation pills and it shows in terms of power, conformity and clarity of the beam. Foxers will love the 3-mode red LED and the single mode ‘Warm White’ is a personal favourite, as it delivers improved contrast compared to the ultrawhite, almost blue-ish light associated with most LEDs.

There’s a whole range on offer, including IR LEDs for the on-gun torch if you’re running an NV scope. You simply pick the pills of your choice at the checkout and you can always add more, with extra LEDs retailing at just £15.99. Swapping pills is a doddle, just unscrew the hood, pop out the lens and replace the screw fit pill – no tools required.

Ludicrous-Lumens have another trick up their sleeve for anyone mounting a torch to a rifle. The Windage/Elevation Adjustable Mount. Admittedly not a particularly catchy title but the product itself is superb at just £21.99. Basically, it’s a ball-joint torch mount. You simply loosen a screw and pivot the torch in any direction you like and then just lock it back down. Better still, the torch and scope elements detach, so you can take the torch from one scope and pop it directly on a separate lower mount on another.

Both top and bottom elements are sold separately, so you can set-up all your rifles without buying complete mounts for each. It’s made of a hard plastic/ polymer but it certainly seems tough enough and once in position it’s rock solid.

The Ludicrous-Lumens Night Saber Solo Hunter Kit is a high-quality lamping set-up, straight from the box. It’s easy to set up and use and is also great value for money.