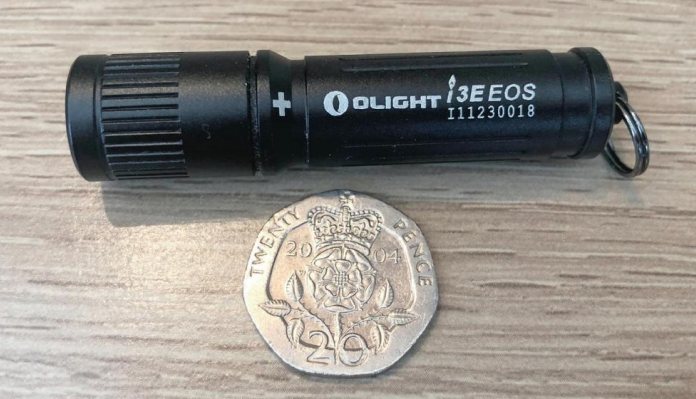 When I first heard about Olight torches, I was impressed but now that I’ve seen just how many variants they make, I’m really impressed! Unless you’ve actually had a look at the Olight website you really won’t believe quite how many torches they produce. I guess the best thing to do it describe features that are common to most of them and then look at individual lights.

All these torches are machined from aircraft grade aluminium and have a black Milspec type-III anodised coating and they usually have a knurled body tube; most have rubber push ON/OFF buttons and most have various settings, such as low, medium and high and often a strobe function is available as well. The vast majority use rechargeable batteries, either stubby RCR123A, 550Ah or 18650, customised 3200mAh types, although the smallest in the range uses a single AAA type. They are all water resistant, but this again varies on the model. What I can say is that they are all very well designed and made!

This is a really tiny torch; it is only 60mm long and weighs in at 19-grams! Despite its diminutive size, it still produces 90-lumens from a single AAA battery, thanks to the Philips LUXEON TX LED (that has a lifespan of 60,000-hours) and a high-quality PMMA TIR lens. There’s a lanyard ring on the tail cap and I’ve been carrying it for months with my keys and it’s amazing how many times I’ve used it. Colours available are silver, black, red, blue, green and purple.

This is Olight’s highest output compact rechargeable flashlight and is 63mm long and weighs 51g; it uses a single IMR 16340 battery and it is charged by simply attaching the magnetic ‘MCC’ charger that fits into a standard USB port. Output is 1000-lumens, which is incredible for such a compact unit and the beam reaches out to 145-metres. A hardened, stainless steel pocket clip is included. Numerous accessories are available, including the FB-1 Bike Mount at £5.95.

This headtorch has an angled, 90-degree head with the ON/OFF button on the top; it is 62mm long and weighs 52g; output is an impressive 600-lumens from the CREE XM-L2 LED and the beam reaches out to 72-metres. The torch can be detached from the headband by simply sliding it out of the silicon mount. It comes with a pocket clip, magnetic charging cable (that attaches to the magnetic tailcap) and a carry pouch. I was using one of these to work on my Land Rover last year and was amazed to see it still attached to the front bumper after driving over 200-miles, these magnets are strong!

This model is Olight’s first headlamp that uses the 18650 battery; it has 90-degree head and is 110mm long and weighs 64g. Power is 2300-lumens and three power levels are available via the switch on the end. It comes with a pocket clip and elasticated headband. Charging is via the standard magnetic cable and the beam is 501-metres.

The R50 Seeker is a USB rechargeable torch that delivers an excellent, maximum power output of 2500-lumens, out to a distance of 297-metres. The Seeker is 132mm long and it weighs 255g. The R50 seeker features a Cree XLamp XHP50 LED with an orange peel reflector for the perfect light combination of distance and width; I’ve found it very useful in a variety of situations. The battery is a fat 26650 unit and it is charged via a Micro-USB cable that plugs into the supplied adaptor. The Micro USB port is on the rear of the torch, protected by a rubber bung. It has a knurled and ribbed body and fits the hand well. From the off position, it automatically returns to your last brightness level with the built-in memory function, which is very handy, as you don’t have to scroll through the three levels available. The Seeker is excellent value for money, and I’ve been carrying it in my Land Rover for use whilst fox shooting.

This handgun ‘weapon light’ is designed to fit Picatinny rails found underneath the forward part of many modern semi-auto pistols and provides the user with a powerful light source at the press of one of the switches mounted on the rear. The unit attaches to the rail via a QD lever clamp and, once mounted, is very secure. We obviously do not have conventional pistols anymore in the UK, but I’ve enjoyed some after dark plinking with several CO2 powered pistols over the last few months and it’s great fun! Military and police units are obviously the real intended customers however and the high-quality and robust design will no doubt impress them. The unit is only 82.5mm long and weighs 80g, so isn’t really noticed when fitted. The switch works from either side and can be pressed in or from the rear; if both are pressed together, the strobe affect is activated. It’s really easy to operate with the trigger finger. Power output is 1200-lumens, and the beam is an impressive 235-metres! The two, non-rechargeable CR123A batteries are next to each other and are removed by pressing a small catch.

As you can see, I’m very impressed with this small selection of the Olight range and I can’t find fault with anything I’ve been using; they are also great value for money.