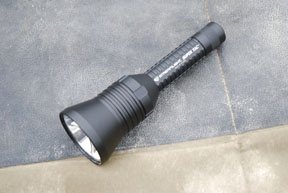 Coming from an age where if you wanted big illumination you needed a big torch, such as the massive D-Cell flashlights epitomised by the MagLite series, it’s a real pleasure to get all the benefits of modern, micro technology. These days torches like the aforementioned MagLite are dinosaurs in terms of size, weight and performance, as small is now not only beautiful but also highly efficient.

As a hunter the benefits of this are obvious, as you can get a tiny torch that will allow you to pick up quarry at night and even now gun lamps that don’t need a couple of pounds of battery and a thick cable getting in the way. We've never had it so good!

With the US company Streamlight now being distributed in the UK by Viking Arms I get a regular supply of innovative torches and lamps coming through. New to me is the ugly but efficient Super TAC.

The bell-shaped Super TAC measures just 6.62” and weighs 7.3oz. Made from black anodised aluminium alloy, the lamp head is wide and long and shows a deep reflector for its C4 LED bulb, which is technology that’s said to effectively triple the brightness.

The body/battery housing is slim at just one inch with grooves and slots to enhance grip and a clothing clip with lanyard adaptor is also fitted. Power comes from just two, disposable 3 V lithium cells (supplied) and a run time of three hours continuous is quoted. Operation is by a simple tail cap switch with continuous (click ON/OFF) and momentary pressure (touch to light) modes.

As well as the clip, Streamlight also supplies a belt holster with stud-closed flap, perhaps not for everyone, but it gives the opportunity to attach it to your belt, if that turns your crank.

There’s little doubt the LED on the Super TAC is powerful and the deep and lightly tapered reflector really punches the beam tightly out to distance. I was out rabbit shooting with it a few weeks ago and just used it for spotting targets as the light went and it was more than good enough to see and shoot the bunnies up to 75 yards + with my 17HMR. For a 22 Long Rifle which has a shorter effective range envelope (certainly at night) it’s ideal too. A bit of work with a spare 1” scope ring and base would allow you to mount it on your optic.

In terms of effective use the 3-hour run time translates into about two-hours practical, as the batteries do start to lose it towards the end of their life.