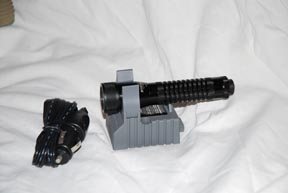 Streamlight impressed me last year with their Sidewinder – a compact, hand-held with an angle head and selectable power and light colour options. A little different, but with some useful features is their Tactical Strion, which is very much the alloy-bodied torch we have come to know and love. What makes this model different is the fact it’s re-chargeable, so once again starting the old argument of the value of disposable, single-use cells versus a renewable power source…

Finance alone favours the re-chargeable, as in most cases they are capable of being re-filled hundreds of times. Whereas with the expensive 3-Volt, Lithium batteries favoured by the disposables you have probably paid for your torch at least once over again for the same amount of use. On the downside a re-chargeable is useless unless you have somewhere to plug it in, so can’t compare to carrying a few spare batteries. Also when the power pak goes, replacing it is expensive by initial comparison. Personally I run both types of system and tend to use them according to their strengths and weaknesses.

There are two Strion models, the standard and Tactical, the only real difference being that the latter has a neat, recoil-resistant mounting clamp that allows it to be easily fitted to a Picatinny-type rail. This is doubtless useful to the night hunter. Made of black aluminium alloy the torch measures 5.3”, weighs 4.6 oz and shows a nominal 1” (0.945”) body diameter, extra grip is provided by grooving and knurling. Operation is basic with the ON/OFF function provided by turning the tail cap in/out, momentary illumination is accomplished by pressing/holding the rubber button in the rear of the cap.

Output is 116 lumens from the 6-watt xenon bulb (spare included in tail cap), which is provided by the 3.75 V re-chargeable, Lithium battery. Run time is around an hour, with two hours being required for a re-charge, the cell being rated for 300 fills. The beam is adjustable by rotating the torch head. In the price Streamlight includes both mains/car chargers and plug/cables, which makes for a comprehensive package.

Also included in the Tactical package is the gun mount. This consists of an alloy cage with a 1” dovetail that interfaces with a Picatinny rail. The Strion slides into the mount and the wheel at the base is turned to raise a set of lugs that engage with the grooves on the body tube to give a recoil-resistant set up.

In use the Strion worked well, throwing a decent beam out to about 50 yards, plus the ability to easily take it ON/OFF a gun was most useful. Equally it’s a neat and compact hand held option too. What I thought was missing was a more sophisticated (click ON/OFF) switching system, as the old twist cap is a bit primitive. Plus gun-mounted; a remote cable would be a real advantage too, as many times I need the light on then off again, without having to do this by breaking my firing position. However, at the price - which is very good - something has to give and in this case it’s the switching system.

Switching considerations aside the Tactical Strion is a nice torch, made even more so by its practical gun mounting system and excellent price.