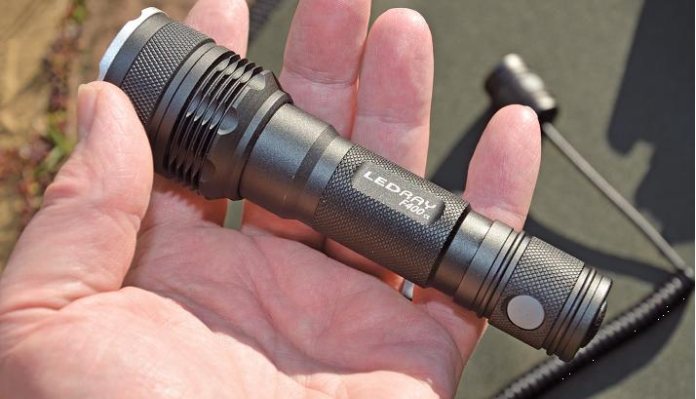 Lamping kits are big business these days, and with technological advances playing their part, the quality just keeps improving. Deben Group has long been involved in this sector of the market, and their Tracer LedRay range is proving ever popular. Ongoing product development and innovation is the name of the game, and their new F400 Lamping kit is a great example of how far we’ve come.

The F400 is available with a white, red or green LED system, my test model was in the white. I was a bit confused (it doesn’t take much) so a quick call to the Deben technical boffins revealed the thinking behind these options. They can supply a filter kit for £9.99, where small coloured filter discs sit over the lamp; useful, but they do significantly reduce the output and range of the beam. To counter this they made the dedicated red or green lamps. White light has the greatest range, and in the case of the F400, the beam can be effective over 300m. Red is roughly half as efficient, so 150m is specified, whilst green is useful to 200m. That’s the basics, so let’s take a closer look!

Though a lamping kit, the F400 uses a compact gun torch as opposed to a big and cumbersome lamp head and offers two control options. First, an integral tail cap ON/OFF button and second a replacement cap with a remote cable, so the switch can be stock-mounted, adhesive Velcro pads are also included for the purpose. There’s also a lanyard, scope body mount for 1” and 30mm tubes and a torch-to-scope connector, and an anti spill/glare tube (stops the light washing sideways too soon). All this comes in a plastic box, which keeps it together.

Assembly is simple, and just requires the relevant 1” or 30mm adaptor as necessary to be fixed to the body tube. The torch is then fixed into its own mount block and connected, where it can be rotated to the position you require. It’s all incredibly easy and versatile. The remote pressure switch is attached to the stock using the Velcro pads; most common is with it on the forend where the supporting hand thumb is used to operate it.

The kit comes with two, disposable CR123A cells, but you also have the option of using a single 18650 rechargeable battery if you prefer. Switching on for the first time, I thought the battery was low; Ok, I shouldn’t be allowed near these things! Then I realized that the small grey rubber coated button actually cycles through the three power levels, it soon becomes clear that the F400 has plenty of power when it is called for. The first setting is ultra low, which proved handy for just giving enough light to find your way in the dark, without alerting all and sundryincluding the quarry. Obviously this setting uses minimal energy, with a run time of around 15 hours. Up the power to the highest (two more clicks of the grey button), and the beam becomes super bright. At this level, the light should be good for around 1.5 hours, which is plenty, given actual operational time in hunting scenarios.

As is quite common with this type of lamping kit, you have the option of using the unit with the integral tail switch, or substituting it for the remote. This is often the better option as you can stay hands on gun, eye on scope and just squeeze the ON/OFF, stock-mounted pressure pad for fast and easy illumination as needed. In tail cap mode the light stays on until turned off. In remote mode continuous pressure on the pad keeps it on, but it goes off when you let it go. This also gives greater battery life and also spooks quarry less as operation is faster! With either option, a strobe light function is accessible at any time, simply by holding down the grey button, which could be useful at some point!

Where the F400 scores is with its focusable beam! Switch the unit on, select the power level, and then twist the front collar fully anti clock wise, and the beam is spread to illuminate a wide area. At its widest setting I found it typically lit up an area the width of a road and approximately 20-25yards ahead. Inside a farm building, the contained beam is impressive too. Twist the collar clockwise, and the light can be progressively focused down, to gain the full distance. Usable brightness at range will obviously depend upon conditions and the sighting systems used. My tests showed that the beam did indeed reach 300m for the record, and certainly at 200-250 metres, brightness levels were exceptional.

The anti spill tube is useful and tends to focus the beam a little as well as reducing close range reflections off parts of the rifle like the base of a silencer or the barrel, which can be an issue with any lamping system. To fit it, remove the silver ring at the front of the lamp head and screw on the tube and refit the ring.

Add in a power level memory (i.e. your last power level selection is held for next time) and constant current output extending battery life and maintaining brightness, and it’s clear the F400 has what it takes for today’s demanding shooters. Typical of modern technology, the RRPs of Tracer LedRay models in general have come down, whilst performance has improved dramatically. I checked my records of previous LedRay specifications I have tested in the last few years, and this new model comes in significantly cheaper, whilst offering markedly more power output.