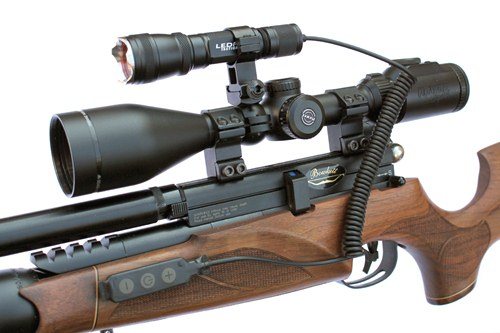 There’s no disputing that tactical-type torches have taken the lamping scene by storm - particularly for the airgun/ rimfire hunter. I’ve several at my disposal but one I now seemingly use most is the Tracer LEDRay Tactical 500 Rechargeable Torch marketed by Deben Group Industries Ltd. They have carved a niche with this comprehensive brand too that offers all things for all shooters!

Apart from the lower power GL2 and GL4, all torches in the LEDRay range come in a practical and stylish ABS carry case. The foam inner lining safely and very neatly holds all the kit that comes supplied with each particular model. ‘In the box’ so to speak, as well as the torch itself you get a nylon carry pouch, 1” and 30mm scope mounts plus the ‘QD’ torch mount, 4-colour (red, amber, green & blue) filter kit, remote mounted, digital 3-Key stock switch, charger cradle and 1X 18650 battery plus a UK AC mains charger. Given you will get 5p change back from £150 it’s a comprehensive and cost-effective set up indeed. Certainly when you see what else is out there!

The robustly built waterproof torch measures 140mm long has a 1” anti-slip textured body tube which flairs outwards to the 33mm diameter Stainless Steel bezel. The reflector and lens are both rated shatterproof capably protecting the super bright CREE R5 LED positioned behind. This high performance LED combined with the internal sophisticated circuitry produces an impressively tight and powerful ‘un-filtered’ beam that can reach out to over 180m. Power and the distance the beam can reach out to, is the main reason a hunter would choose a particular model of torch from this range over another brand.

The robust, black-anodised aluminium body has an anti-roll design rear tail switch and removable belt clip. All features you appreciate when using it as a handheld.

The tail cap has a large, rubberised ON/OFF switch and offers four, selectable modes as standard. These are selected by pressing the generously sized ‘mode control switch’ on the side of the tail cap itself. These access 3 power modes (low, medium & high) plus the emergency strobe facility. It also has the capability of memorising the last brightness level selected when switched off.

For scope mounting you have 25mm and 30mm scope mount rings. Both upper cradles have an integral raised receiver that mates up with the lower part of the 1” torch mount. This attaches onto the upper receiver block with a large serrated edge thumb screw. For nipping up to fully secure the torch and mount - the screw head is also slotted. When fitted, both ‘mounts’ raise the torch high enough to clear scopes with up to a 50mm objective lens.

What makes the torch so versatile when gun-mounted is the unique 3-Key dimmer pressure switch.

This replaces the tail switch and has a sensible length of tough coiled lead with a straight run of cable connecting to the ‘control’ pad itself. This elongated pressure activated rubberised switch has three controls. The middle button turns the torch ON and OFF while the rear button increases the brightness and the one furthest forward lowers it.

When switched off, it remembers the last light setting so once you switch back on returns to that light level. However it doesn’t just change the beam to high, medium or low power but offers a much more precise level of operation. Reason being, once switched on, pressing and holding down the appropriate button slowly increases or reduces the intensity of the beam.

A superb unit that’s one of the best I’ve used for remote operation of the light source while being able to easily and securely hold your rifle. My only nit-pick is although the QD torch mount holds the Tactical 500 very securely is it’s relatively basic compared to others such as the multi-adjustable torch clamp that used by Cluson. So when it’s on your rifle there’s no means of adjusting the relationship of the beam to where you are pointing. OK for fixed distance shooting, but less so for variable ranges, which is what we hunters expect. But with an effective working range of 180m there’s enough beam spread to still be highly effective!

Another unfortunate downside is on some popular optics with high tactical locking turret adjusters is the mount doesn’t raise the torch high enough to prevent the body tube fouling on the elevation turret. This of course could be corrected to a degree by slacking of the body clamp and moving the mount around a little until it clears the turret.

Despite this, when mounted correctly the LEDRay Tactical 500 Rechargeable Torch is one of the best performers of its kind.

Build quality, ease of use and very versatile when used with the ‘Digi-Remote Switch’