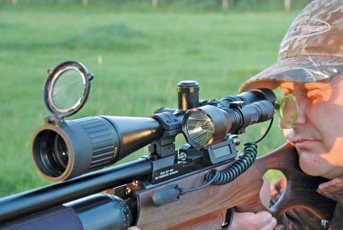 Seemingly gone are the days when one shooter would stand holding the car battery sized power pack, whilst the other took the shot; as the new breed of lamps are not only super effective, but also lightweight and scope mountable - i.e. portable.

The lamp on test here is the Tracer Ledray Ultra Spot 200m model, and it comes supplied as a ready-to-go kit, with everything needed to get started. The set comes nicely presented in a padded box, and comprises the torch itself, a rechargeable battery, 2 switch options, battery charger, choice of scope mount, allen key and instructions.

Initially, the battery needs to be charged for between 2 and 4hours, and the charger shows green when ready. The torch seems very precisely made from aluminium and is mounted to the rifle scope via the appropriate size split-ring mount - either 30mm or 1inch, dependent upon the scope body tube.

At this point, the shooter needs to select which type of switch is preferred. A simple on/off button can be screwed into the rear of the torch body, or a remote pressure switch can be used which is stuck onto the gun stock. The latter is adjustable with three modes offering battery life of 2 hours on high, 4.5 on medium and 10 on low. Beam is supplied by a LED CREE Q5 powered by a 3w/3.7v rechargeable type 18650 battery and generating 200 Lumens.

This Ultra Spot 200’s LED beam is capable of illuminating a target up to 200metres away. Three brightness levels are possible with the beam and I decided to gauge the effectiveness of the set-up by calling in the assistance of a friend, Richard, who happens to be not only an avid hunter, but an existing user of a lower spec Ledray lamp.

The stage was set on an ultra fine evening, in between some truly awful weather, and as light fell, the action could start. Fixing the lamp to Richards’s Daystate was simple, since his existing scope clamps were identical and in place already. The design is effectively quick release, which makes switching one lamp between rifles easy.

If the truth be told, one rabbit only was taken over the course of our jaunt, and that was in half light before the true effectiveness of the lamp could be utilized. However, as the evening went on, a full evaluation was still possible, and the following observations were made.

Firstly, the remote rifle switch slightly disappoints. It doubles as the mode adjuster switching between the three power settings, but it doesn’t switch to a pressure only mode. If it is used carefully, then it can be used in this manner, but technically, it is an on/off switch. Coloured filters, which can be effective in certain scenarios, are available as optional extras, priced at £6.95.

These points apart, the beam itself proved highly effective on all three settings, and the main beam, proved to perfectly illuminate to an identifiable level, objects out to the full specified distance of 200metres The manufacturers specify that this particular lamp has been designed to produce a narrow light spot (25% wider than their Pin Spot) and in use this was perfectly borne out. In addition, the spec states that intelligent internal electronics provide a constant current output, which apparently extends battery life. In addition, what can’t fail to impress with these lamps, is their compact size (6” in length and 1.75” head diameter) and light weight (just 6.8oz).

Overall then, other than that switching drawback, which isn’t insurmountable, my hunting party were extremely impressed with this kit. With 200m range, it means the Tracer Ledray Ultra Spot 200 is suitable for rimfire and centrefire rifles too, and at an all-in price of £119.95, I reckon it represents great value for money for the hunter who wants performance, in a super-compact package.