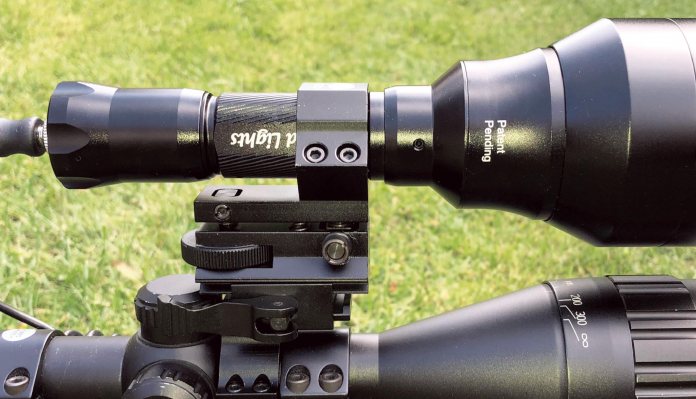 I spend a lot of time at my local farm controlling foxes. It’s open to the public and schools for educational visits and they used to be plagued by foxes that walked around during daylight hours, helping themselves to hens, geese etc. but I’ve been able to get on top of the situation over the years. I’ve used a variety of kit, some really impressive, some not so… I’ve managed to sort out quite a remarkable number of them during daylight and early evening, but I’m obviously limited to after the visitors have departed for the day. I’m not sure that they’d take too kindly to some guy in camo with a rifle!

I’ve recently been sent the brand new Wicked A67iC Ambush Hog & Predator hunting light by the guys at Scott Country International and I’m rather pleased that they did! It may look like a conventional torch but is anything but. The black anodised alloy body houses one 18650 battery (two are supplied) held in place by a screw-on ‘Intensity Control’ end cap that has an in-built silent ON/OFF switch; the rotary knob can be used to alter the light output from barely on to full power by rotating it. However, it is the other end of the unit that has the really interesting features! A 65mm lens is mounted in a rotating housing that has three LEDs behind it, the position of which can be altered by a threeposition dial; either red, green or white. This Patented ‘Center Axis Rotational 3-Color-In-1 Selectable Color LED module’ is mounted on the side of the lens housing and allows for instant section of whichever coloured LED is required.

The light can obviously be used as a hand-held torch but when mounted in the adjustable mount, it can be fixed to a riflescope by mounting the supplied Picatinny rail to the top of the scope; the unit can be fitted to 1-inch and 30mm scope tubes using a ring adaptor, so it’s incredibly versatile. A quick release ‘throw lever’ clamp allows the light to be removed and installed easily, as and when required. The light beam is easily adjusted until the beam aligns perfectly with the view through the scope; elevation is adjusted via a large thumbwheel underneath the light and left/right is altered by using the smaller, knurled dial on the side. Once the beam is aligned, changing the colour of the LED modules does not alter the ‘zero’ of the light, which is fantastic, as you really don’t want to be fiddling with your lamp if you’ve just changed to colour of the LED to suit the situation. This gives complete confidence in the unit when shooting foxes, rabbits etc. The flood to spot adjustment of the beam is altered by turning the front lens housing and the beam can reach out for many hundreds of yards and It’s possible to see ‘eye shine’ from a very long way away.

When used as a rifle mounted light, the rear switch can be replaced by the ‘coil cord tail cap’; some other lights lose the full functionality of the ON/OFF dimmer control when this happens but not the A67iC. The lead plugs into the tailcap and is held securely by a threaded collar, so it won’t come loose at an awkward moment and leave you in the dark; the control is mounted to the rifle’s stock via a Velcro type hook and loop system and there’s an adjustable elasticated strap included for a real belt and braces approach – nice!

I mounted the Wicked light on my Anschutz .22 Hornet bolt action rifle and found that focusing the beam was simplicity itself by turning the front housing. It’s possible to narrow the beam to such an extent that the shape of the LED ‘pill’ is clearly visible, or have it as a really wide, flood pattern. Zeroing the beam only took a few seconds with the adjuster dials and it didn’t alter at all over many weeks, including knocking the rifle off the bipod onto the ground! The scope remained zeroed and so did this cracking light. Most importantly, the position of the beam did not vary as the colours were changed. I find that foxes are not really bothered by green light, so set it in this colour on my first outing but subsequently used red as well. White was very handy for locating dead foxes at the end of the evening too, in handheld mode.

On one particular night, I managed to locate a fox and called it in from 100-yards; the incredibly bright beam reaches out four times this distance by the way! I had the light set on minimum power, so as not to spook my quarry, only turning the light up just before I took the shot. It’s possible to roll the switch between the fingertips or just your thumb and everything happens in complete silence, even turning the light on and off. The fox fell to a well-placed shot and I’ve had many more since. I’ve used this light every time I’ve been out after foxes for nearly two months now and it’s never let me down and everything is as it was first set up initially. A ‘Halo Shield’ is included that can stop the beam spreading too much but I’ve not actually found that I’ve needed it.

I can certainly see this light being part of my foxing gear in the future. I actually couldn’t find anything I didn’t like about this lamp, in fact it’s Wicked!