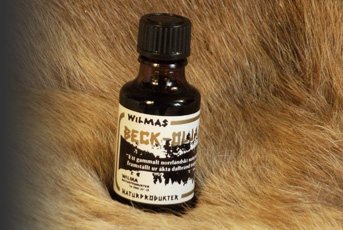 For those aching muscles at the end of a day in the field there is “Hunter’s Liniment”, a blend of camphor oil, peppermint oil, menthol, Cajeput oil, pine needle oil and other components, including bear grease, designed to massage into, and relieve those stiff muscles.

Smelling somewhat like Tiger Balm, the Hunter’s Liniment comes in a very attractive birch bark pot with a birchwood lid and base. Using this liniment while suffering with a bad cold, I also found it helped clear my sinuses!  The Hunter’s Liniment costs around £17 for 60g as shown or £6 for a 35g tin

For dry cracked, rough skin, eczema, scratches, etc., there is Resin Ointment (Kad Salve), a blend of natural fats, spruce resin and beeswax.  This very pleasant smelling ointment makes a great, easily absorbed hand cream and – as I found out – a pleasant tasting lip balm too.

If you enjoyed the flavour of the Resin Ointment as a lip balm, then you will love the Resin chewing gum!

Made from purified 100% spruce resin, this natural alternative to sweetened synthetic modern “chewie” has been used since the Stone Age as a mildly antiseptic tooth cleaner as much as a pleasant habit.  Coming as a brittle slab, it takes a short while of chewing before the resin becomes chewy, but then it lasts a very long time and never loses its flavour.  OK, the flavour is a bit of an acquired taste… but I (and many others) like it!

Coming in a 20gm pack that costs around £3.50 the Resin chewing gum comes with an interesting information sheet and a resealable packet.

“Beck-Olja” is a natural oil derived from traditional pine tar production and has a wide range of traditional uses. Originally used as an effective deterrent to the famous swarms of northern mozzies, midges, gnats and other biting nasties, Beck-Olja also has a reputation as being a cure-all, being an ingredient in cold cures, muscle rubs, soaps etc and appears to have mild antiseptic properties.  It has even been used to flavour Vodka!  The aroma is rather “love it or hate it” and I love it as it is highly reminiscent of tarps that have been smoked over a camp fire… nights out in the wild and all that… great stuff!

One modern use of Beck-Olja is as a very effective attractant for wild boar – so be careful where you use it! Coming in 25ml bottles Beck-Olja costs £6.50 per bottle.

Warmed by hand into leather boots, luggage, knife or axe sheath, Bear Cream penetrates well and is effective –somewhat like traditional dubbin – as well as smelling great.  I find it acts as a good hand softener as well and you do not need to apply much Bear Cream for good coverage.